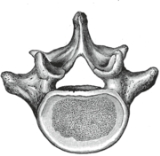 Encyclopedia
The lumbar vertebrae are the largest segments of the movable part of the vertebral column
Vertebral column
In human anatomy, the vertebral column is a column usually consisting of 24 articulating vertebrae, and 9 fused vertebrae in the sacrum and the coccyx. It is situated in the dorsal aspect of the torso, separated by intervertebral discs...
, and are characterized by the absence of the foramen transversarium within the transverse process, and by the absence of facets on the sides of the body. They are designated L1 to L5, starting at the top.

These are the general characteristics of the first through fourth lumbar vertebrae. The fifth vertebra contains certain peculiarities, which are detailed below.

The vertebral body of each lumbar vertebra is large, wider from side to side than from front to back, and a little thicker in front than in back. It is flattened or slightly concave above and below, concave behind, and deeply constricted in front and at the sides.

The pedicle
Pedicle of vertebral arch
The pedicles are two short, thick processes, which project dorsally, one on either side, from the superior part of the vertebral body at the junction of its posterior and lateral surfaces. They connect the body of the spinal vertebra to the arch...
s are very strong, directed backward from the upper part of the vertebral body; consequently, the inferior vertebral notches are of considerable depth. The pedicles change in morphology from the upper lumbar to the lower lumbar. They increase in sagittal width from 9 mm to up to 18 mm at L5. They increase in angulation in the axial plane from 10 degrees to 20 degrees by L5. The pedicle is sometimes used as a portal of entrance into the vertebral body for fixation with pedicle screws or for placement of bone cement
Bone cement
Bone cements have been used very successfully to anchor artificial joints for more than half a century. Artificial joints are anchored with bone cement. The bone cement fills the free space between the prosthesis and the bone and plays the important role of an elastic zone...
as with kyphoplasty or vertebroplasty.

The laminae are broad, short, and strong. They form the posterior portion of the vertebral arch. In the upper lumbar region the lamina are taller than wide but in the lower lumbar vertebra the lamina are wider than tall. The lamina connect the spinous process to the pedicles.

The spinous process is thick, broad, and somewhat quadrilateral; it projects backward and ends in a rough, uneven border, thickest below where it is occasionally notched.

The transverse processes are long and slender. They are horizontal in the upper three lumbar vertebrae and incline a little upward in the lower two. In the upper three vertebrae they arise from the junctions of the pedicles and laminae, but in the lower two they are set farther forward and spring from the pedicles and posterior parts of the vertebral bodies. They are situated in front of the articular processes instead of behind them as in the thoracic vertebrae, and are homologous
Homology (biology)
Homology forms the basis of organization for comparative biology. In 1843, Richard Owen defined homology as "the same organ in different animals under every variety of form and function". Organs as different as a bat's wing, a seal's flipper, a cat's paw and a human hand have a common underlying...
with the ribs. 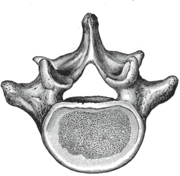 Some individuals have four lumbar vertebrae, while others have six. Lumbar disorders that normally affect L5 will affect L4 or L6 in these individuals.

The fifth lumbar vertebra is characterized by its body being much deeper in front than behind, which accords with the prominence of the sacrovertebral articulation; by the smaller size of its spinous process; by the wide interval between the inferior articular processes, and by the thickness of its transverse processes, which spring from the body as well as from the pedicles.

The range of segmental movements in a single segment is difficult to measure clinically, not only because of variations between individuals, but also because it is age and gender dependent. Furthermore, flexion and extension in the lumbal spine is the product of a combination of rotation and translation in the sagittal plane between each vertebra.

Ranges of segmental movements in the lumbal spine (White and Panjabi, 1990) are (in degrees):