Encyclopedia
The martinet is a punitive device traditionally used in France
France
The French Republic , The French Republic , The French Republic , (commonly known as France , is a unitary semi-presidential republic in Western Europe with several overseas territories and islands located on other continents and in the Indian, Pacific, and Atlantic oceans. Metropolitan France...
and other parts of Europe
Europe
Europe is, by convention, one of the world's seven continents. Comprising the westernmost peninsula of Eurasia, Europe is generally 'divided' from Asia to its east by the watershed divides of the Ural and Caucasus Mountains, the Ural River, the Caspian and Black Seas, and the waterways connecting...
. The word also has other usages (see below). It is also a term for a type of hammer
Hammer
A hammer is a tool meant to deliver an impact to an object. The most common uses are for driving nails, fitting parts, forging metal and breaking up objects. Hammers are often designed for a specific purpose, and vary widely in their shape and structure. The usual features are a handle and a head,...
in French
French language
French is a Romance language spoken as a first language in France, the Romandy region in Switzerland, Wallonia and Brussels in Belgium, Monaco, the regions of Quebec and Acadia in Canada, and by various communities elsewhere. Second-language speakers of French are distributed throughout many parts...
, a diminutive
Diminutive
In language structure, a diminutive, or diminutive form , is a formation of a word used to convey a slight degree of the root meaning, smallness of the object or quality named, encapsulation, intimacy, or endearment...
of marteau (Latin
Latin
Latin is an Italic language originally spoken in Latium and Ancient Rome. It, along with most European languages, is a descendant of the ancient Proto-Indo-European language. Although it is considered a dead language, a number of scholars and members of the Christian clergy speak it fluently, and...
martulus), "hammer". 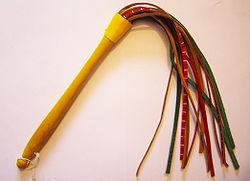 A martinet is a short, scourge
Scourge
A scourge is a whip or lash, especially a multi-thong type used to inflict severe corporal punishment or self-mortification on the back.-Description:...
-like (multi-tail) type of whip made of a wooden handle of about 25 cm (10 inches) in length and about 10 lashes of equal, relatively short length. The lashes are usually made of leather
Leather
Leather is a durable and flexible material created via the tanning of putrescible animal rawhide and skin, primarily cattlehide. It can be produced through different manufacturing processes, ranging from cottage industry to heavy industry.-Forms:...
, but sometimes soap
Soap
In chemistry, soap is a salt of a fatty acid.IUPAC. "" Compendium of Chemical Terminology, 2nd ed. . Compiled by A. D. McNaught and A. Wilkinson. Blackwell Scientific Publications, Oxford . XML on-line corrected version: created by M. Nic, J. Jirat, B. Kosata; updates compiled by A. Jenkins. ISBN...
-stiffened cords are used in place of leather. It is a traditional instrument of physical punishment
Physical punishment
Physical punishment is any form of penalty in a judicial, educational or domestic setting that takes a physical form, by the infliction on the offender of pain, injury, discomfort or humiliation...
in France
France
The French Republic , The French Republic , The French Republic , (commonly known as France , is a unitary semi-presidential republic in Western Europe with several overseas territories and islands located on other continents and in the Indian, Pacific, and Atlantic oceans. Metropolitan France...
(in French, it also meant a similar dusting implement; the type for chastisement was also known as fouet d'enfant, 'child's whip') and other Europe
Europe
Europe is, by convention, one of the world's seven continents. Comprising the westernmost peninsula of Eurasia, Europe is generally 'divided' from Asia to its east by the watershed divides of the Ural and Caucasus Mountains, the Ural River, the Caspian and Black Seas, and the waterways connecting...
an countries.

The martinet was often applied on the calves, so that the children did not have to disrobe. Otherwise it was usually applied on the bare buttocks, adding humiliation to the physical pain, like the English and Commonwealth caning
Caning
Caning is a form of corporal punishment consisting of a number of hits with a single cane usually made of rattan, generally applied to the offender's bare or clothed buttocks or hand . Application of a cane to the knuckles or the shoulders has been much less common...
, birching
Birching
Birching is a corporal punishment with a birch rod, typically applied to the recipient's bare buttocks, although occasionally to the back and/or shoulders.-Implement:...
, naval boy's pussy, American paddling
Paddle (spanking)
A spanking paddle is an implement used to strike a person on the buttocks. The act of striking a person with a paddle is known as "paddling". A paddling may be for punishment , or as an initiation or hazing ritual, or for erotic purposes.A paddle has two parts: a handle and a blade...
, et cetera.

It is generally considered abusive
Child abuse
Child abuse is the physical, sexual, emotional mistreatment, or neglect of a child. In the United States, the Centers for Disease Control and Prevention and the Department of Children And Families define child maltreatment as any act or series of acts of commission or omission by a parent or...
to use it for spanking
Spanking
Spanking refers to the act of striking the buttocks of another person to cause temporary pain without producing physical injury. It generally involves one person striking the buttocks of another person with an open hand. When an open hand is used, spanking is referred to in some countries as...
children in modern times. Still, martinets were still sold in the pet
Pet
A pet is a household animal kept for companionship and a person's enjoyment, as opposed to wild animals or to livestock, laboratory animals, working animals or sport animals, which are kept for economic or productive reasons. The most popular pets are noted for their loyal or playful...
section of French supermarket
Supermarket
A supermarket, a form of grocery store, is a self-service store offering a wide variety of food and household merchandise, organized into departments...
s; it is generally believed that a large share of those sold are meant for use on children, not pets, or at least to threaten them. But, nowadays many supermarkets in France have stopped selling the martinet, even in the pet section. Some supermarkets in Spain still sell martinets.

The term was used for an external pupil of a collège (i.e. continental high school, especially Catholic). Jean Bodin
Jean Bodin
Jean Bodin was a French jurist and political philosopher, member of the Parlement of Paris and professor of law in Toulouse. He is best known for his theory of sovereignty; he was also an influential writer on demonology....
, quoting the examination of three witches by Paolo Grillandi
Paolo Grillandi
Paolo Grillandi was an Italian jurist, from Abruzzo, active as a papal judge in witch trials, from 1517. He was an influential observer of confessions. His book Tractatus de hereticis et sortilegiis , based substantially on his judicial experience, became a standard text on witchcraft and demonology...
of Castiglione at the Castello San Paolo, Spoleto
Spoleto
Spoleto is an ancient city in the Italian province of Perugia in east central Umbria on a foothill of the Apennines. It is S. of Trevi, N. of Terni, SE of Perugia; SE of Florence; and N of Rome.-History:...
, records that the witches referred to the Devil as Master Martinet (maistre Martinet), or the Little Master (petit maistre).