Encyclopedia
Longline fishing is a commercial fishing
Fishing
Fishing is the activity of trying to catch wild fish. Fish are normally caught in the wild. Techniques for catching fish include hand gathering, spearing, netting, angling and trapping....
technique. It uses a long line, called the main line, with baited hooks
Fish hook
A fish hook is a device for catching fish either by impaling them in the mouth or, more rarely, by snagging the body of the fish. Fish hooks have been employed for centuries by fishermen to catch fresh and saltwater fish. In 2005, the fish hook was chosen by Forbes as one of the top twenty tools...
attached at intervals by means of branch lines called "snoods". A snood is a short length of line, attached to the main line using a clip or swivel, with the hook at the other end. Longlines are classified mainly by where they are placed in the water column. This can be at the surface or at the bottom. Lines can also be set by means of an anchor, or left to drift. Hundreds or even thousands of baited hooks can hang from a single line. Longliners commonly target swordfish
Swordfish
Swordfish , also known as broadbill in some countries, are large, highly migratory, predatory fish characterized by a long, flat bill. They are a popular sport fish of the billfish category, though elusive. Swordfish are elongated, round-bodied, and lose all teeth and scales by adulthood...
, tuna
Tuna
Tuna is a salt water fish from the family Scombridae, mostly in the genus Thunnus. Tuna are fast swimmers, and some species are capable of speeds of . Unlike most fish, which have white flesh, the muscle tissue of tuna ranges from pink to dark red. The red coloration derives from myoglobin, an...
, halibut
Halibut
Halibut is a flatfish, genus Hippoglossus, from the family of the right-eye flounders . Other flatfish are also called halibut. The name is derived from haly and butt , for its popularity on Catholic holy days...
, sablefish
Sablefish
The sablefish, Anoplopoma fimbria, is one of two members of the fish family Anoplopomatidae and the only species in the Anoplopoma genus...
and many other species.

In some unstable fisheries, such as the Patagonian toothfish
Patagonian toothfish
The Patagonian toothfish, Dissostichus eleginoides , is a fish found in the cold, temperate waters of the southern Atlantic, southern Pacific, Indian, and Southern Oceans on seamounts and continental shelves around most sub-Antarctic islands.A close relative, the Antarctic toothfish , is found...
, fishermen may be limited to as few as 25 hooks per line. In contrast, commercial longliners in certain robust fisheries of the Bering Sea and North Pacific generally run over 2,500 hand-baited hooks on a single series of connected lines many miles in length.

Longlines can be set to hang near the surface (pelagic longline) to catch fish such as tuna and swordfish or along the sea floor (demersal
Demersal zone
The demersal zone is the part of the sea or ocean comprising the water column that is near to the seabed and the benthos. The demersal zone is just above the benthic zone and forms a layer of the larger profundal zone....
longline) for groundfish such as halibut or cod
Cod
Cod is the common name for genus Gadus, belonging to the family Gadidae, and is also used in the common name for various other fishes. Cod is a popular food with a mild flavor, low fat content and a dense, flaky white flesh. Cod livers are processed to make cod liver oil, an important source of...
. Longliners fishing for sablefish
Sablefish
The sablefish, Anoplopoma fimbria, is one of two members of the fish family Anoplopomatidae and the only species in the Anoplopoma genus...
, also referred to as black cod, occasionally set gear on the sea floor at depths exceeding 1100 metres (3,608.9 ft) using relatively simple equipment. Longlines with traps attached rather than hooks can be used for crab fishing
Crab fisheries
Crab fisheries are fisheries which capture or farm crabs. True crabs make up 20% of all crustaceans caught and farmed worldwide, with about 1.4 million tonnes being consumed annually. The horse crab, Portunus trituberculatus accounts for one quarter of that total...
in deep waters.

Longline fishing is prone to the incidental catching and killing of seabird
Seabird
Seabirds are birds that have adapted to life within the marine environment. While seabirds vary greatly in lifestyle, behaviour and physiology, they often exhibit striking convergent evolution, as the same environmental problems and feeding niches have resulted in similar adaptations...
s, sea turtle
Sea turtle
Sea turtles are marine reptiles that inhabit all of the world's oceans except the Arctic.-Distribution:...
s, and shark
Shark
Sharks are a type of fish with a full cartilaginous skeleton and a highly streamlined body. The earliest known sharks date from more than 420 million years ago....
s. Otherwise, compared to other fishing techniques such as bottom trawling
Bottom trawling
Bottom trawling is trawling along the sea floor. It is also often referred to as "dragging".The scientific community divides bottom trawling into benthic trawling and demersal trawling...
, longline fishing is less destructive to bottom habitats. It generally has good species selectivity and low fuel consumption. 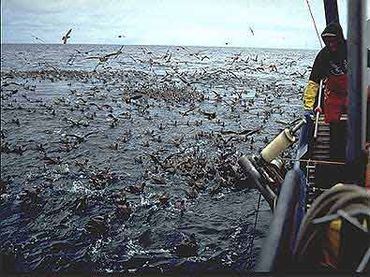 Longline fishing is controversial in some areas because of bycatch
Bycatch
The term “bycatch” is usually used for fish caught unintentionally in a fishery while intending to catch other fish. It may however also indicate untargeted catch in other forms of animal harvesting or collecting...
, fish caught while seeking another species or immature juveniles of the target species. This can cause many issues, such as the killing of many other marine animals while seeking certain commercial fish. Seabirds can be particularly vulnerable during the setting of the line.

Methods to mitigate incidental mortality have succeeded in some fisheries. Mitigation techniques include the use of weights to ensure the lines sink quickly, the deployment of streamer lines to scare away birds, setting lines only at night in low light (to avoid attracting birds), limiting fishing seasons to the southern winter (when most seabirds are not feeding young), and not discharging offal while setting lines.

The Hawaii
Hawaii
Hawaii is the newest of the 50 U.S. states , and is the only U.S. state made up entirely of islands. It is the northernmost island group in Polynesia, occupying most of an archipelago in the central Pacific Ocean, southwest of the continental United States, southeast of Japan, and northeast of...
-based longline fishery for swordfish
Swordfish
Swordfish , also known as broadbill in some countries, are large, highly migratory, predatory fish characterized by a long, flat bill. They are a popular sport fish of the billfish category, though elusive. Swordfish are elongated, round-bodied, and lose all teeth and scales by adulthood...
was closed in 2000 over concerns of excessive sea turtle by-catch, particularly loggerhead sea turtle
Loggerhead sea turtle
The loggerhead sea turtle , or loggerhead, is an oceanic turtle distributed throughout the world. It is a marine reptile, belonging to the family Cheloniidae. The average loggerhead measures around long when fully grown, although larger specimens of up to have been discovered...
s and leatherback turtles. Changes to the management rules allowed the fishery to reopen in 2004. Gear modification, particularly a change to large circle-hooks and mackerel
Mackerel
Mackerel is a common name applied to a number of different species of fish, mostly, but not exclusively, from the family Scombridae. They may be found in all tropical and temperate seas. Most live offshore in the oceanic environment but a few, like the Spanish mackerel , enter bays and can be...
-type baits, eliminated much of the sea turtle by-catch associated with the fishing technique. It has been claimed that one consequence of the closure was that 70 Hawaii-based vessels were replaced by 1,500-1,700 longline vessels from various Asian nations, but this is not based on any reliable data. Due to poor and often non-existent catch documentation by these vessels, the number of sea turtles and albatross
Albatross
Albatrosses, of the biological family Diomedeidae, are large seabirds allied to the procellariids, storm-petrels and diving-petrels in the order Procellariiformes . They range widely in the Southern Ocean and the North Pacific...
caught by these vessels between 2000 and 2004 will never be known. Hawaii longline fishing for swordfish closed again on March 17, 2006, when the by-catch limit of 17 loggerhead turtles was reached. In 2010 the by-catch limit for loggerhead turtles was raised, but was restored to the former limit as a result of litigation. The Hawaii based longline fisheries for tuna and swordfish are managed under sets of slightly different rules. The tuna fishery is one of the best managed fisheries in the world, according to the UN Code of Responsible Fishing, but has been criticized by others as being responsible for continuing by-catch of false killer whales, seabirds, and other nontargeted wildlife, as well as placing pressure on depleted bigeye tuna stocks.

Commercial longline fishing has also one of the main threats to albatrosses. Of the 21 albatross species recognized in the IUCN Red List
IUCN Red List
The IUCN Red List of Threatened Species , founded in 1963, is the world's most comprehensive inventory of the global conservation status of biological species. The International Union for Conservation of Nature is the world's main authority on the conservation status of species...
, 19 are threatened, and the other two are near threatened. The IUCN lists two species as critically endangered
Endangered species
An endangered species is a population of organisms which is at risk of becoming extinct because it is either few in numbers, or threatened by changing environmental or predation parameters...
: the Amsterdam Albatross
Amsterdam Albatross
The Amsterdam Albatross or Amsterdam Island Albatross, Diomedea amsterdamensis, is a huge albatross which breeds only on Amsterdam Island in the southern Indian Ocean. It was only described in 1983, and was thought by some researchers to be a sub-species of the Wandering Albatross, exulans...
and the Chatham Albatross
Chatham Albatross
The Chatham Albatross, Chatham Mollymawk, or Chatham Islands Mollymawk, Thalassarche eremita, is a medium-sized black-and-white albatross which breeds only on The Pyramid, a large rock stack in the Chatham Islands, New Zealand. It is sometimes treated as a subspecies of the Shy Albatross...
.
Albatrosses and other seabird
Seabird
Seabirds are birds that have adapted to life within the marine environment. While seabirds vary greatly in lifestyle, behaviour and physiology, they often exhibit striking convergent evolution, as the same environmental problems and feeding niches have resulted in similar adaptations...
s which readily feed on offal
Offal
Offal , also called, especially in the United States, variety meats or organ meats, refers to the internal organs and entrails of a butchered animal. The word does not refer to a particular list of edible organs, which varies by culture and region, but includes most internal organs other than...
are attracted to the set bait, become hooked on the lines and drown. An estimated 100,000 albatross per year are killed in this way.
The source of this article is wikipedia, the free encyclopedia.  The text of this article is licensed under the GFDL.