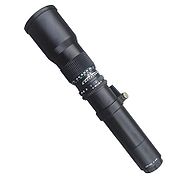 In photography
Photography
Photography is the art, science and practice of creating durable images by recording light or other electromagnetic radiation, either electronically by means of an image sensor or chemically by means of a light-sensitive material such as photographic film...
, a long-focus lens is a camera lens which has a focal length
Focal length
The focal length of an optical system is a measure of how strongly the system converges or diverges light. For an optical system in air, it is the distance over which initially collimated rays are brought to a focus...
that is longer than the diagonal measure of the film or sensor that receives its image.
It is used to make distant objects appear magnified
Magnification
Magnification is the process of enlarging something only in appearance, not in physical size. This enlargement is quantified by a calculated number also called "magnification"...
with magnification increasing as longer focal length lenses are used. A long-focus lens is one of three basic photographic lens
Photographic lens
A camera lens is an optical lens or assembly of lenses used in conjunction with a camera body and mechanism to make images of objects either on photographic film or on other media capable of storing an image chemically or electronically.While in principle a simple convex lens will suffice, in...
types classified by relative focal length, the other two being a normal lens
Normal lens
In photography and cinematography a normal lens, also called a standard lens, is a lens that reproduces perspective that generally looks "natural" to a human observer under normal viewing conditions, as compared with lenses with longer or shorter focal lengths which produce an expanded or...
and a wide-angle lens
Wide-angle lens
From a design perspective, a wide angle lens is one that projects a substantially larger image circle than would be typical for a standard design lens of the same focal length; this enables either large tilt & shift movements with a view camera, or lenses with wide fields of view.More informally,...
.
As with other types of camera lenses, the focal length is usually expressed in a millimeter value written on the lens, for example: a 500mm lens. The most common type of long-focus lens is the telephoto lens
Telephoto lens
In photography and cinematography, a telephoto lens is a specific type of a long-focus lens in which the physical length of the lens is shorter than the focal length. This is achieved by incorporating a special lens group known as a telephoto group that extends the light path to create a long-focus...
, which incorporate a special lens group known as a telephoto group to make the physical length of the lens shorter than the focal length.

Long-focus lenses are best known for making distant objects appear magnified
Magnification
Magnification is the process of enlarging something only in appearance, not in physical size. This enlargement is quantified by a calculated number also called "magnification"...
. This effect is similar to moving closer to the object, but is not the same, since perspective
Perspective (visual)
Perspective, in context of vision and visual perception, is the way in which objects appear to the eye based on their spatial attributes; or their dimensions and the position of the eye relative to the objects...
is a function solely of viewing location. Two images taken from the same location, one with a wide angle lens and the other with a long-focus lens, will show identical perspective, in that near and far objects appear the same relative size to each other. Comparing magnification by using a long lens to magnification by moving closer, however, the long-focus-lens shot appears to compress the distance between objects due to the perspective from the more distant location. Long lenses thus give a photographer an alternative to the type of perspective distortion
Perspective distortion (photography)
In photography and cinematography, perspective distortion is a warping or transformation of an object and its surrounding area that differs significantly from what the object would look like with a normal focal length, due to the relative scale of nearby and distant features...
exhibited by shorter focal length lenses where (when the photographer stands closer to the given subject) different portions of a subject in a photograph can appear out of proportion to each other.

Long lenses also make it easier to blur the background more, even when the depth of field
Depth of field
In optics, particularly as it relates to film and photography, depth of field is the distance between the nearest and farthest objects in a scene that appear acceptably sharp in an image...
is the same; photographers will sometimes use this effect to defocus the background in an image to "separate" it from the subject. This background blurring is often referred to as bokeh
Bokeh
In photography, bokeh is the blur, or the aesthetic quality of the blur, in out-of-focus areas of an image, or "the way the lens renders out-of-focus points of light."...
by photographers.

Effect of different focal lengths on photographs taken from the same place:
The above photos were taken using a 35 mm
135 film
The term 135 was introduced by Kodak in 1934 as a designation for cartridge film wide, specifically for still photography. It quickly grew in popularity, surpassing 120 film by the late 1960s to become the most popular photographic film format...
camera, using lenses of the given focal length
Focal length
The focal length of an optical system is a measure of how strongly the system converges or diverges light. For an optical system in air, it is the distance over which initially collimated rays are brought to a focus...
s.

The photographer often moves to keep the same image size on the film for a particular object. Observe in the comparison images below that although the foreground object remains the same size, the background changes size; thus, perspective is dependent on the distance between the photographer and the subject. The longer focus lenses compress the perception of depth, and the shorter focus exaggerate it.
This effect is also used for dolly zoom
Dolly zoom
The dolly zoom is an unsettling in-camera effect that appears to undermine normal visual perception. It is part of many cinematic techniques used in filmmaking and television production....
s. The perspective of the so-called normal lens, 50mm focal length for 35 mm film format, is conventionally regarded as a "correct" perspective, though a longer lens is usually preferred for a more pleasing perspective for portraits.

From the invention of photography in the 19th century, images have been captured using standard optical telescope
Optical telescope
An optical telescope is a telescope which is used to gather and focus light mainly from the visible part of the electromagnetic spectrum for directly viewing a magnified image for making a photograph, or collecting data through electronic image sensors....
s including telescope objectives
Objective (optics)
In an optical instrument, the objective is the optical element that gathers light from the object being observed and focuses the light rays to produce a real image. Objectives can be single lenses or mirrors, or combinations of several optical elements. They are used in microscopes, telescopes,...
adapted as early portrait lenses. Besides being used in an astronomical role in astrophotography
Astrophotography
Astrophotography is a specialized type of photography that entails recording images of astronomical objects and large areas of the night sky. The first photographs of an astronomical object were taken in the 1840s, but it was not until the late 19th century that advances in technology allowed for...
, telescopes are adapted as long-focus lenses in nature photography, surveillance
Surveillance
Surveillance is the monitoring of the behavior, activities, or other changing information, usually of people. It is sometimes done in a surreptitious manner...
, machine vision
Machine vision
Machine vision is the process of applying a range of technologies and methods to provide imaging-based automatic inspection, process control and robot guidance in industrial applications. While the scope of MV is broad and a comprehensive definition is difficult to distil, a "generally accepted...
and long-focus microscopy.

To use a telescope as a camera lens requires an adapter for the standard 1.25 inch tube eyepiece
Eyepiece
An eyepiece, or ocular lens, is a type of lens that is attached to a variety of optical devices such as telescopes and microscopes. It is so named because it is usually the lens that is closest to the eye when someone looks through the device. The objective lens or mirror collects light and brings...
mount, usually a T-mount
T-mount
T-mount is a standard lens mount for cameras and other optical assemblies.The T2 version is a screw mount using a male M42x0.75 metric thread on the lens with a flange focal distance of 55 mm, and a mating female thread on a camera adapter or other optical component. This thread form is referred...
adapter, which in turn attaches to an adapter for the system camera
System camera
A system camera is a camera with interchangeable components that constitutes the core of a system. Early representatives include Leica I Schraubgewinde , Exakta and the Nikon F...
's particular lens mount
Lens mount
A lens mount is an interface — mechanical and often also electrical — between a photographic camera body and a lens. It is confined to cameras where the body allows interchangeable lenses, most usually the single lens reflex type or any movie camera of 16 mm or higher gauge...
. Controlling exposure is done by exposure time
Shutter speed
In photography, shutter speed is a common term used to discuss exposure time, the effective length of time a camera's shutter is open....
, gain, or filter
Filter (optics)
Optical filters are devices which selectively transmit light of different wavelengths, usually implemented as plane glass or plastic devices in the optical path which are either dyed in the mass or have interference coatings....
s since telescopes almost always lack diaphragms for aperture
Aperture
In optics, an aperture is a hole or an opening through which light travels. More specifically, the aperture of an optical system is the opening that determines the cone angle of a bundle of rays that come to a focus in the image plane. The aperture determines how collimated the admitted rays are,...
adjustment. The 1.25 inch mount is smaller than many film and sensor formats
Image sensor format
In digital photography, the image sensor format is the shape and size of the image sensor.The image sensor format of a digital camera determines the angle of view of a particular lens when used with a particular camera...
so they tend to show vignetting
Vignetting
In photography and optics, vignetting  is a reduction of an image's brightness or saturation at the periphery compared to the image center. The word vignette, from the same root as vine, originally referred to a decorative border in a book. Later, the word came to be used for a photographic...
around the field edges. Telescopes are normally intended for visual use, so they are not corrected to produce a large flat field like dedicated camera lenses and tend to show optical aberration.

Since the late 1990s compact digital cameras have been used in afocal photography
Afocal photography
Afocal photography, also called afocal imaging or afocal projection is a method of photography where the camera with its lens attached is mounted over the eyepiece of another image forming system such as a optical telescope or optical microscope, with the camera lens taking the place of the human...
, a technique where the camera lens is left attached, taking a picture directly through the telescope's eyepiece lens itself, also referred to as "digiscoping
Digiscoping
Digiscoping is a neologism for the activity of using a digital camera to record distant images by coupling it with an optical telescope. The term usually refers to using either a digital single-lens reflex camera with lens attached or, more often, a fixed lens point and shoot digital camera to...
."