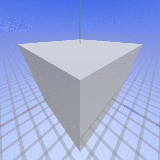 Overview
In photography
Photography
Photography is the art, science and practice of creating durable images by recording light or other electromagnetic radiation, either electronically by means of an image sensor or chemically by means of a light-sensitive material such as photographic film...
and cinematography
Cinematography
Cinematography is the making of lighting and camera choices when recording photographic images for cinema. It is closely related to the art of still photography...
, perspective distortion is a warping or transformation of an object and its surrounding area that differs significantly from what the object would look like with a normal focal length
Normal lens
In photography and cinematography a normal lens, also called a standard lens, is a lens that reproduces perspective that generally looks "natural" to a human observer under normal viewing conditions, as compared with lenses with longer or shorter focal lengths which produce an expanded or...
, due to the relative scale of nearby and distant features. Perspective distortion is determined by the relative distances at which the image is captured and viewed, and is due to the angle of view
Angle of view
In photography, angle of view describes the angular extent of a given scene that is imaged by a camera. It is used interchangeably with the more general term field of view....
of the image (as captured) being either wider or narrower than the angle of view at which the image is viewed, hence the apparent relative distances differing from what is expected.

Hi, I'm a big fan of your website. I just found a broken link in this article. The one that leads to the article from Kevin Willey about "Compressi...
More
x