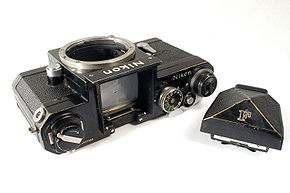 A system camera is a camera
Camera
A camera is a device that records and stores images. These images may be still photographs or moving images such as videos or movies. The term camera comes from the camera obscura , an early mechanism for projecting images...
with interchangeable components that constitutes the core of a system. Early representatives include Leica I Schraubgewinde
Leica
Leica Camera AG, a German optics company, produces Leica cameras. The predecessor of the company, formerly known as Ernst Leitz GmbH, is now three companies: Leica Camera AG, Leica Geosystems AG, and Leica Microsystems AG, producing cameras, geosurvey equipment, and microscopes, respectively...
(1930), Exakta
Exakta
The Exakta is a pioneer brand camera produced by the Ihagee Kamerawerk in Dresden, Germany, founded as the Industrie und Handels-Gesellschaft mbH, in 1912.- Characteristics :Highlights of Exakta cameras include:...
(1936) and the Nikon F
Nikon F
The Nikon F camera, introduced in 1959, was Nikon's first SLR camera. It was one of the most advanced cameras of its day. Although most of its concepts had already been introduced elsewhere, it was the first camera to combine them all in one camera. It was produced until October 1973 and was...
(1959). System cameras are often single-lens reflex
Single-lens reflex camera
A single-lens reflex camera is a camera that typically uses a semi-automatic moving mirror system that permits the photographer to see exactly what will be captured by the film or digital imaging system, as opposed to pre-SLR cameras where the view through the viewfinder could be significantly...
(SLR) or twin-lens reflex
Twin-lens reflex camera
A twin-lens reflex camera is a type of camera with two objective lenses of the same focal length. One of the lenses is the photographic objective or "taking lens" , while the other is used for the viewfinder system, which is usually viewed from above at waist level...
(TLR) but can also be rangefinder camera
Rangefinder camera
A rangefinder camera is a camera fitted with a rangefinder: a range-finding focusing mechanism allowing the photographer to measure the subject distance and take photographs that are in sharp focus...
s or, more recently, mirrorless interchangeable lens camera
Mirrorless interchangeable lens camera
A mirrorless interchangeable-lens camera is an emerging class of digital system cameras, intermediate between compact digital cameras and digital single-lens reflex cameras . They are characterized by a no-mirror design and an interchangeable lens mount...
s.

Even point-and-shoot cameras often include a tripod
Tripod
A tripod is a portable three-legged frame, used as a platform for supporting the weight and maintaining the stability of some other object. The word comes from the Greek tripous, meaning "three feet". A tripod provides stability against downward forces, horizontal forces and moments about the...
socket. A system camera includes at the very least a camera body and separate, interchangeable lenses. In addition it often includes:

While some early mechanical interfaces are standardized across brands, optical and electronic interfaces are often proprietary. Hot shoe
Hot shoe
A hot shoe is a mounting point on the top of a camera to attach a flash unit.- Design :The hot shoe is shaped somewhat like an inverted, squared-off "U" of metal. The matching adapter on the bottom of the flash unit slides in from the back of the camera and is sometimes secured by a clamping screw...
s have a common interface for basic flash functions, but often contain proprietary contacts inside for advanced flashes and data modules.
The source of this article is wikipedia, the free encyclopedia.  The text of this article is licensed under the GFDL.