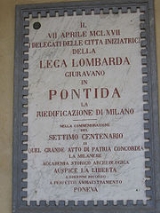 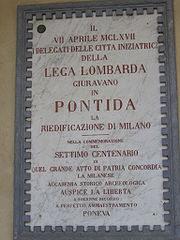 The Lombard League was renewed several times and after 1226 regained its former prestige by countering the efforts of Frederick II
Frederick II, Holy Roman Emperor
Frederick II , was one of the most powerful Holy Roman Emperors of the Middle Ages and head of the House of Hohenstaufen. His political and cultural ambitions, based in Sicily and stretching through Italy to Germany, and even to Jerusalem, were enormous...
to gain greater power in Italy. These efforts included the taking of Vicenza
Vicenza
Vicenza , a city in north-eastern Italy, is the capital of the eponymous province in the Veneto region, at the northern base of the Monte Berico, straddling the Bacchiglione...
and the Battle of Cortenuova
Battle of Cortenuova
The Battle of Cortenuova was fought on 27 November 1237 in the course of the Guelphs and Ghibellines Wars: in it, Holy Roman Emperor Frederick II defeated the Second Lombard League.-Background:...
which established the reputation of the Emperor as a skillful strategist. He misjudged his strength, rejecting all Milanese peace overtures and insisting on unconditional surrender. It was a moment of grave historic importance when Frederick's hatred coloured his judgment and blocked all possibilities of a peaceful settlement. Milan and five other cities held out, and in October 1238 he had to unsuccessfully raise the siege of Brescia
Brescia
Brescia is a city and comune in the region of Lombardy in northern Italy. It is situated at the foot of the Alps, between the Mella and the Naviglio, with a population of around 197,000. It is the second largest city in Lombardy, after the capital, Milan...
.
Once again receiving papal
Pope
The Pope is the Bishop of Rome, a position that makes him the leader of the worldwide Catholic Church . In the Catholic Church, the Pope is regarded as the successor of Saint Peter, the Apostle...
support, the Lombard League effectively countered Frederick's efforts. During the 1249 siege of Parma
Parma
Parma is a city in the Italian region of Emilia-Romagna famous for its ham, its cheese, its architecture and the fine countryside around it. This is the home of the University of Parma, one of the oldest universities in the world....
, the Imperial camp was assaulted and taken, and in the ensuing Battle of Parma the Imperial side was routed. Frederick lost the Imperial treasure and with it any hope of maintaining the impetus of his struggle against the rebellious communes and against the pope. The League was dissolved in 1250 once Frederick died.