Encyclopedia
Little Rock National Airport , officially Little Rock National Airport/Adams Field, is located 2 miles (3 km) east of the central business district
Central business district
A central business district is the commercial and often geographic heart of a city. In North America this part of a city is commonly referred to as "downtown" or "city center"...
of Little Rock
Little Rock, Arkansas
Little Rock is the capital and the largest city of the U.S. state of Arkansas. The Metropolitan Statistical Area had a population of 699,757 people in the 2010 census...
, a city in Pulaski County, Arkansas
Arkansas
Arkansas is a state located in the southern region of the United States. Its name is an Algonquian name of the Quapaw Indians. Arkansas shares borders with six states , and its eastern border is largely defined by the Mississippi River...
, United States
United States
The United States of America is a federal constitutional republic comprising fifty states and a federal district...
. It is Arkansas' largest commercial service airport, serving more than 2.1 million passengers in the year measured from March 2009 through February 2010. The airport attracts passengers from a large part of Arkansas as well as a number of surrounding states.

Although the airport does not have direct international passenger flights, there are more than 150 flight arrivals and departures at Little Rock each day, with non-stop jet service to 18 national/international gateway cities.

The regional jet made its first appearance at Little Rock National in 1997, with three daily flights by Delta Connection
Delta Connection
Delta Connection is the name under which a number of individually owned regional airlines and one wholly owned regional carrier operate short and medium haul routes in association with Delta Air Lines Inc...
carrier, Comair
Comair
Comair is a wholly owned subsidiary of Delta Air Lines headquartered on the grounds of Cincinnati-Northern Kentucky International Airport in unincorporated Boone County, Kentucky, United States, west of Erlanger, and south of Cincinnati, Ohio...
, to Cincinnati. Comair has now been joined by other Delta Connection carriers as well as American Eagle
American Eagle Airlines
American Eagle Airlines is a brand name used by American Eagle Airlines, Inc. , based in Fort Worth, Texas, and Executive Airlines based in San Juan, Puerto Rico, in the operation of passenger air service as regional affiliates of American Airlines. All three airlines are wholly owned subsidiaries...
, Continental Express
Continental Express
Continental Express is the operating brand name used by a number of independently owned regional airlines providing regional jet feeder service under agreement with Continental Airlines...
, United Express
United Express
United Express is a brand name under which eight regional airlines operate feeder flights for United Airlines. They primarily connect smaller cities with United's domestic hub airports and “focus cities,” although they offer some point-to-point service such as Sacramento to Eureka.As of Sept...
, and US Airways Express
US Airways Express
US Airways Express is an airline brand name, rather than a fully certified airline, and as such, the US Airways Express name is used by several individually owned airlines or airline holding companies which provide regional airline and commuter service for US Airways.Operations are conducted from...
in operating the regional jet at Little Rock.

In 1972, the airport unveiled its current 12-gate terminal.

In August 2008 the airport announced that it had approved a plan to renovate the terminal over a 15-year period. The central component of the plan would be to expand the terminal from 12 to 16 gates.

Adams Field covers an area of 2000 acres (809.4 ha) which contains three runway
Runway
According to ICAO a runway is a "defined rectangular area on a land aerodrome prepared for the landing and take-off of aircraft." Runways may be a man-made surface or a natural surface .- Orientation and dimensions :Runways are named by a number between 01 and 36, which is generally one tenth...
s and one helipad
Helipad
Helipad is a common abbreviation for helicopter landing pad, a landing area for helicopters. While helicopters are able to operate on a variety of relatively flat surfaces, a fabricated helipad provides a clearly marked hard surface away from obstacles where a helicopter can safely...
.

For the 12-month period ending December 31, 2005, the airport had 167,880 aircraft operations, an average of 459 per day: 42% general aviation
General aviation
General aviation is one of the two categories of civil aviation. It refers to all flights other than military and scheduled airline and regular cargo flights, both private and commercial. General aviation flights range from gliders and powered parachutes to large, non-scheduled cargo jet flights...
, 23% air taxi
Air taxi
An air taxi is an air charter passenger or cargo aircraft which operates on an on-demand basis.-Regulation:In the United States, air taxi and air charter operations are governed by Part 135 of the Federal Aviation Regulations , unlike the larger scheduled air carriers which are governed by more...
, 15% scheduled commercial
Airline
An airline provides air transport services for traveling passengers and freight. Airlines lease or own their aircraft with which to supply these services and may form partnerships or alliances with other airlines for mutual benefit...
and 20% military
Military aviation
Military aviation is the use of aircraft and other flying machines for the purposes of conducting or enabling warfare, including national airlift capacity to provide logistical supply to forces stationed in a theater or along a front. Air power includes the national means of conducting such...
. At that time there were 152 aircraft based at this airport: 45% single-engine
Aircraft engine
An aircraft engine is the component of the propulsion system for an aircraft that generates mechanical power. Aircraft engines are almost always either lightweight piston engines or gas turbines...
, 32% multi-engine, 22% jet
Jet aircraft
A jet aircraft is an aircraft propelled by jet engines. Jet aircraft generally fly much faster than propeller-powered aircraft and at higher altitudes – as high as . At these altitudes, jet engines achieve maximum efficiency over long distances. The engines in propeller-powered aircraft...
and 1% helicopter
Helicopter
A helicopter is a type of rotorcraft in which lift and thrust are supplied by one or more engine-driven rotors. This allows the helicopter to take off and land vertically, to hover, and to fly forwards, backwards, and laterally...
.

The airport has a single, elongated terminal building with 12 gates. Six gates are located along the length of the terminal (three on either side) and a circular area at the end has six more gates.

The terminal handles more passenger traffic than it was originally designed for. Nineteen planes are berthed every night, and the circular area - where Southwest Airlines
Southwest Airlines
Southwest Airlines Co. is an American low-cost airline based in Dallas, Texas. Southwest is the largest airline in the United States, based upon domestic passengers carried,...
, the airport's largest carrier, controls three gates - is especially vulnerable to crowds and long lines.
Public transportation to and from the airport is provided by Central Arkansas Transit Authority (CATA) bus #12.http://www.cat.org/bus/routes/12_east_sixth.html 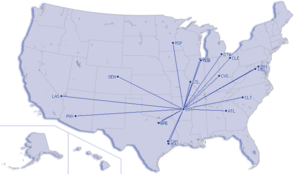