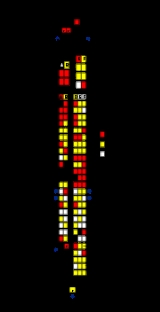 The pilots of flight 1420 were Captain
Pilot in command
The pilot in command of an aircraft is the person aboard the aircraft who is ultimately responsible for its operation and safety during flight. This would be the "captain" in a typical two- or three-pilot flight crew, or "pilot" if there is only one certified and qualified pilot at the controls of...
Richard Buschmann and First Officer Michael Origel.

As the aircraft approached Runway 4R, a severe thunderstorm
Thunderstorm
A thunderstorm, also known as an electrical storm, a lightning storm, thundershower or simply a storm is a form of weather characterized by the presence of lightning and its acoustic effect on the Earth's atmosphere known as thunder. The meteorologically assigned cloud type associated with the...
arrived over the airport. The controller's last report, prior to the landing, stated that the winds were 330 degrees at 28 knots. That exceeded the MD-82's crosswind limit for landing in reduced visibility on a wet runway. With that information, plus two wind shear reports, the approach should have been abandoned at that point, but Captain Buschmann decided to continue his approach to Runway 4R.

During their rush to land as soon as possible, both pilots became overloaded with multiple necessary tasks. That led to errors and omissions, which proved to be the final links in the accident chain
Chain of events (aviation)
In aviation, a chain of events, often called the error chain, is a term referring to the concept that many contributing factors typically lead to an accident, rather than one single event. These contributing actions typically stem from human factor-related mistakes and pilot error, rather than...
. Consequently they failed to arm the automatic ground spoiler
Spoiler (aeronautics)
In aeronautics, a spoiler is a device intended to reduce lift in an aircraft. Spoilers are plates on the top surface of a wing which can be extended upward into the airflow and spoil it. By doing so, the spoiler creates a carefully controlled stall over the portion of the wing behind it, greatly...
system (hinged panels on top of the wings). The smooth airflow over the top of the wing
Wing
A wing is an appendage with a surface that produces lift for flight or propulsion through the atmosphere, or through another gaseous or liquid fluid...
s is disrupted when the spoilers deploy automatically, as the wheels touch the runway. This negates the lifting ability of the wings, thereby making the wheel brakes more effective by transferring the weight of the aircraft from the wings to its wheels.

The pilots also failed to arm the auto braking system. Both automatic deployment of the ground spoilers and automatic engagement of the brakes are essential to ensure the plane's ability to stop within the confines of a wet runway, especially one that is being subjected to strong and gusting winds.

After landing, First Officer Origel stated, "We're down. We're sliding." The captain then said " Oh No!" Neither pilot observed that the spoilers did not deploy, so there was no attempt to activate them manually. The result was almost no braking at all, since only about 15 percent of the airplane's weight was supported by the main landing gear.

Directional control was lost when Captain Buschmann applied too much reverse thrust, in contradiction to the limits stated in the flight manual.

The aircraft skidded off the far end of the runway at high speed, slammed into a steel walkway with the landing lights for runway 22L and finally came to a stop on the banks of the Arkansas River
Arkansas River
The Arkansas River is a major tributary of the Mississippi River. The Arkansas generally flows to the east and southeast as it traverses the U.S. states of Colorado, Kansas, Oklahoma, and Arkansas. The river's initial basin starts in the Western United States in Colorado, specifically the Arkansas...
.

"After departing the end of the runway, the airplane struck several tubes extending outward from the left edge of the instrument landing system (ILS) localizer array, located 411 feet beyond the end of the runway; passed through a chain link security fence and over a rock embankment to a flood plain, located approximately 15 feet below the runway elevation; and collided with the structure supporting the runway 22L approach lighting system."


Such structures are usually frangible - i.e. designed to shear off on impact - but because the approach lights were located on the unstable river bank, they were firmly anchored and the impact destroyed the aircraft. It broke into three pieces and ignited
Fire
Fire is the rapid oxidation of a material in the chemical process of combustion, releasing heat, light, and various reaction products. Slower oxidative processes like rusting or digestion are not included by this definition....
.

Rachel Fuller, a passenger who sustained severe burns, died on June 16, following the amputation of her leg.

Of the cabin crew :

Of the surviving passengers :

After the accident American Airlines revised its checklist so that pilots would confirm that the spoilers are armed. 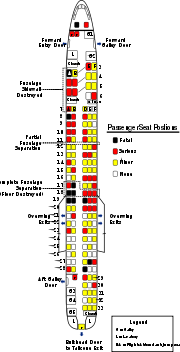 Experts from the Massachusetts Institute of Technology (MIT)
Massachusetts Institute of Technology
The Massachusetts Institute of Technology is a private research university located in Cambridge, Massachusetts. MIT has five schools and one college, containing a total of 32 academic departments, with a strong emphasis on scientific and technological education and research.Founded in 1861 in...
created a study recording behavior of pilots landing at Dallas/Fort Worth Airport; the researchers checked to see whether pilots land in thunderstorms. Within a total of two thousand thunderstorm encounters, two out of three pilots landed in a thunderstorm. The study states that pilots exhibited more recklessness when they fell behind schedule, if they landed during the night, and if aircraft in front of them also landed in bad weather. Greg Feith
Greg Feith
Gregory "Greg" Feith is a former American Senior Air Safety Investigator with the National Transportation Safety Board. During his time at the NTSB, Feith worked as an Air Safety Investigator Unit Supervisor, Regional Director, and Senior Air Safety Investigator. Feith was also the U.S...
, the lead NTSB investigator, said he felt surprised that pilots exhibited this behavior. The MIT study illustrated the industry-wide trends that factored into the Flight 1420 crash. Feith added that the pilots may have exhibited "get there-itis" as the pilots knew that they were approaching their 14 hour duty limits.

Multiple lawsuits were filed after the crash and on December 15, 1999, the Judicial Panel on Multidistrict Litigation consolidated the various federal lawsuits over the crash for consolidated and coordinated pretrial proceedings and assigned the case to the late United States District Court Senior Judge Henry Woods
Henry Woods (judge)
Henry Woods was a United States federal judge.Born in Abbeville, Mississippi, Woods received a B.A. from the University of Arkansas at Fayetteville in 1938 and a J.D. from the University of Arkansas School of Law in 1940. He was an FBI special agent from 1941 to 1946...
of the Eastern District of Arkansas. In the lawsuits the passengers sought compensatory and punitive damages from American Airlines.

Meanwhile, the National Transportation Safety Board ruled the probable cause of the crash was: "The flight crew's failure to discontinue the approach when severe thunderstorms and their associated hazards to flight operations had moved into the airport area and the crew's failure to ensure that the spoilers had extended after touchdown. Contributing to the accident were the flight crew's (1) impaired performance resulting from fatigue and the situational stress associated with the intent to land under the circumstances, (2) continuation of the approach to a landing when the company's maximum crosswind component was exceeded, and (3) use of reverse thrust greater than 1.3 engine pressure ratio after landing."

"Three compensatory damages trials involving domestic Plaintiffs were ultimately tried to a jury and awards of $ 5.7 million, $ 3.4 million and $ 4.2 million were made." These three Plaintiffs pursued but ultimately lost their claims for punitive damages. The District Court granted summary judgment in American Airlines' favor on punitive damages, finding under Arkansas law the evidence was insufficient to submit the issue to a jury to decide. This ruling was later upheld on appeal.

In upholding summary judgment for American Airlines on punitive damages the United States Court of Appeals for the Eighth Circuit explained:
In the only liability trial arising out of the crash of flight 1420, a federal jury in Little Rock awarded Captain Buschmann's family $2 million in wrongful death damages in a lawsuit they filed against the Little Rock National Airport. The jury decided Captain Buschmann's death occurred because the aircraft collided with illegal non-frangible approach light supports erected in what should have been the Runway Safety Area. It was concluded that Little Rock National Airport failed to comply with airport safety standards. The Captain's estate presented evidence the spoilers were deployed and malfunctioned (not the captain's fault), and that the aircraft was not in turbulence. The jury rejected the airport's argument that Captain Buschmann was at fault in causing his own death.

It has been stated the jury verdict completely absolved Captain Buschmann of all fault for the crash. However, 1) the National Transportation Safety Board has not changed its probable cause ruling and 2) American Airlines admitted liability for the crash and "paid many millions of dollars in damages to the passengers and their families."

According to a comment made about 10 years after the crash by David Rapoport, a lawyer who was a member of the PSC, "after all these years [whether Captain Buschmann was "absolved" of all responsibility for the crash] is still a matter reasonable people who are fully informed may disagree on", however, there should be consensus "flight operations should not be conducted in the terminal area when thunderstorms are on the flight path; and non-frangible objects should not be placed where it is foreseeable an aircraft may go."

The story of the disaster was featured on the first episode of the Canadian National Geographic Channel
National Geographic Channel
National Geographic Channel, also commercially abbreviated and trademarked as Nat Geo, is a subscription television channel that airs non-fiction television programs produced by the National Geographic Society. Like History and the Discovery Channel, the channel features documentaries with factual...
show Mayday
Mayday (TV series)
Mayday, also known as Air Crash Investigation in the United Kingdom, Australia and Asia and Air Emergency and Air Disasters in the United States, is a Canadian documentary television programme produced by Cineflix investigating air crashes, near-crashes and other disasters...
(known as Air Emergency in the US, Mayday in Ireland and Air Crash Investigation in the UK and the rest of world) entitled "Racing the Storm" or "Fatal Landing". The Weather Channel
The Weather Channel
The Weather Channel is a US cable and satellite television network since May 2, 1982, that broadcasts weather forecasts and weather-related news, along with entertainment programming related to weather 24 hours a day...
also detailed the story of the flight on an episode of Storm Stories, as did bio.
The Biography Channel
The Biography Channel is an American digital cable television channel owned by A&E and based on the television series of the same name. A version of the channel also airs on ONO and Telefónica in Spain and on Sky Digital and cable television in the United Kingdom, a version of the channel also...
on the show Flightmares.

A 2004 memorial ceremony was held adjacent to the airport. Jeana Varnell, one of the survivors, attended the ceremony and in a newspaper article, strongly objected to the memorializing of Captain Buschmann.