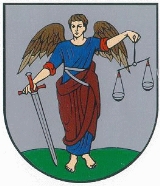 As German Wirballen, Polish Wierzbołów, or Russian Verzhbolovo , it is frequently mentioned in historical as well in modern literature. It was the site of the formation of the Wierzbołów Confederation by Paweł Jan Sapieha
Paweł Jan Sapieha
Paweł Jan Sapieha was a Polish-Lithuanian nobleman .Paweł Jan became a Hussar Rotmistrz in 1633, courtier in 1635, Obozny of Lithuania in 1638, Podstoli of Lithuania in 1645, voivode of the Witebsk Voivodeship in 1646, voivode of the Vilnius Voivodeship and Great Hetman of Lithuania in 1656.He...
in 1655 during the Deluge (part of the Second Northern War
Second Northern War
The Second Northern War was fought between Sweden and its adversaries the Polish–Lithuanian Commonwealth , Russia , Brandenburg-Prussia , the Habsburg Monarchy and Denmark–Norway...
). Later it was the first station for stagecoach
Stagecoach
A stagecoach is a type of covered wagon for passengers and goods, strongly sprung and drawn by four horses, usually four-in-hand. Widely used before the introduction of railway transport, it made regular trips between stages or stations, which were places of rest provided for stagecoach travelers...
es and later the first railway station in the Russian Empire
Russian Empire
The Russian Empire was a state that existed from 1721 until the Russian Revolution of 1917. It was the successor to the Tsardom of Russia and the predecessor of the Soviet Union...
when leaving Germany.

When in 1861 a branch of the Saint Petersburg – Warsaw Railway was built from Vilnius
Vilnius
Vilnius is the capital of Lithuania, and its largest city, with a population of 560,190 as of 2010. It is the seat of the Vilnius city municipality and of the Vilnius district municipality. It is also the capital of Vilnius County...
to the Prussia
Prussia
Prussia was a German kingdom and historic state originating out of the Duchy of Prussia and the Margraviate of Brandenburg. For centuries, the House of Hohenzollern ruled Prussia, successfully expanding its size by way of an unusually well-organized and effective army. Prussia shaped the history...
n border, where it was linked to the Prussian Eastern Railway, the Russian border station near the village of Kybartai
Kybartai
Kybartai is a city in the Marijampolė County, Lithuania. It is located west of Vilkaviškis and is on the border of Kaliningrad Oblast, Russia....
was named after the neighbouring town of Verzhbolovo. Meanwhile Kybartai has become a town bigger than Virbalis, and the Lithuanian border station station is now called Kybartai, too. The German station of the Prussian Eastern Railway on the western side of the frontier was Eydtkuhnen; today it is the Russian border station and called Chernyshevskoye
Chernyshevskoye
Chernyshevskoye is a settlement in Nesterovsky District in the eastern part of Kaliningrad Oblast, Russia, on the border with Lithuania.Between Chernyshevskoye and Lithuanian Kybartai is an important 24-hour border crossing point on the A229 principal road and the railway route connecting...
.
The source of this article is wikipedia, the free encyclopedia.  The text of this article is licensed under the GFDL.