World War I
World War I
World War I , which was predominantly called the World War or the Great War from its occurrence until 1939, and the First World War or World War I thereafter, was a major war centred in Europe that began on 28 July 1914 and lasted until 11 November 1918...
, which lasted from August 1914 to November 1918, was, at the time, the largest single war ever to have occurred. There was a large number of allies on each side of the conflict, and their geographical location and that of their imperial provinces meant that parts of the war were fought all over Europe
Europe
Europe is, by convention, one of the world's seven continents. Comprising the westernmost peninsula of Eurasia, Europe is generally 'divided' from Asia to its east by the watershed divides of the Ural and Caucasus Mountains, the Ural River, the Caspian and Black Seas, and the waterways connecting...
, and in other places such as North Africa
North Africa
North Africa or Northern Africa is the northernmost region of the African continent, linked by the Sahara to Sub-Saharan Africa. Geopolitically, the United Nations definition of Northern Africa includes eight countries or territories; Algeria, Egypt, Libya, Morocco, South Sudan, Sudan, Tunisia, and...
and the Middle East
Middle East
The Middle East is a region that encompasses Western Asia and Northern Africa. It is often used as a synonym for Near East, in opposition to Far East...
. A battle
Battle
Generally, a battle is a conceptual component in the hierarchy of combat in warfare between two or more armed forces, or combatants. In a battle, each combatant will seek to defeat the others, with defeat determined by the conditions of a military campaign...
is a smaller conflict between two military enemies that often makes up part of a war. This is a list (though not exhaustive) of the battles of World War I, in chronological order. They are organised as to the opening date of the battle. 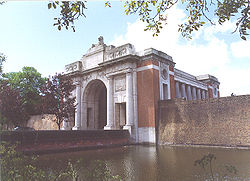 1 Battle of Coronel
Battle of Coronel
The First World War naval Battle of Coronel took place on 1 November 1914 off the coast of central Chile near the city of Coronel. German Kaiserliche Marine forces led by Vice-Admiral Graf Maximilian von Spee met and defeated a Royal Navy squadron commanded by Rear-Admiral Sir Christopher...
3 Raid on Yarmouth
Raid on Yarmouth
The Raid on Yarmouth, which took place on 3 November 1914, was an attack by the German Navy on the British North Sea port and town of Great Yarmouth. Little damage was done to the town since shells only landed on the beach after German ships laying mines offshore were interrupted by British...
3 Battle of Kilimanjiro
3 Battle of Tanga
Battle of Tanga
The Battle of Tanga, sometimes also known as the Battle of the Bees, was the unsuccessful attack by the British Indian Expeditionary Force “B” under Major General A.E. Aitken to capture German East Africa during World War I in concert with the invasion Force “C” near Longido on the slopes of...
5 Capture of Basra
11 Battle of Lodz
Battle of Lódz
In the history of warfare there were two battles fought in the vicinity of the city of Łódź:# Battle of Łódź during World War I# Battle of Łódź during the Invasion of Poland...

25 Battle of Loos
Battle of Loos
The Battle of Loos was one of the major British offensives mounted on the Western Front in 1915 during World War I. It marked the first time the British used poison gas during the war, and is also famous for the fact that it witnessed the first large-scale use of 'new' or Kitchener's Army...
28 Kut-al-Amara
28 Battle of Es Sinn

1 Battle of the Somme 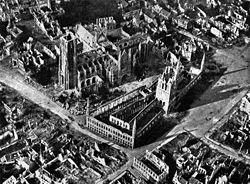 9 Battle of the Lys/Operation Georgette
23 Raid on Zeebrugge

4 Battle of Hamel
Battle of Hamel
The Battle of Hamel was a successful attack launched by the Australian Corps of the Australian Imperial Force and several American units against German positions in and around the town of Hamel in northern France during World War I....
14 Battle of Abu Tellul
Battle of Abu Tellul
The Battle of Abu Tellul was fought on 14 July 1918 during the Sinai and Palestine Campaign of World War I between German and Ottoman Empire forces which attacked the front line of the British Empire garrison protecting their occupation of the Jordan Valley...
15 Second Battle of the Marne
Second Battle of the Marne
The Second Battle of the Marne , or Battle of Reims was the last major German Spring Offensive on the Western Front during the First World War. The German attack failed when an Allied counterattack led by France overwhelmed the Germans, inflicting severe casualties...
18 Battle of Soissons
Battle of Soissons (1918)
The Battle of Soissons was a World War I battle, waged during 18 July to 22 July 1918, between the French and the German armies....
21 Attack on Orleans

12 Battle of Havrincourt
Battle of Havrincourt
- Notes :# - a mistake on the part either of Byng or of Repington, as it was actually the 62nd Division....
12 Battle of Saint-Mihiel
Battle of Saint-Mihiel
The Battle of Saint-Mihiel was a World War I battle fought between September 12–15, 1918, involving the American Expeditionary Force and 48,000 French troops under the command of U.S. general John J. Pershing against German positions...
18 Battle of Epehy
Battle of Epéhy
The Battle of Épehy was a World War I battle fought on 18 September 1918, involving the British Fourth Army against German outpost positions in front of the Hindenburg Line.- Prelude :...
19 Battle of Megiddo
Battle of Megiddo (1918)
The Battle of Megiddo took place between 19 September and 1 October 1918, in what was then the northern part of Ottoman Palestine and parts of present-day Syria and Jordan...
26 Battle of the Argonne Forest
Meuse-Argonne Offensive
The Meuse-Argonne Offensive, or Maas-Argonne Offensive, also called the Battle of the Argonne Forest, was a part of the final Allied offensive of World War I that stretched along the entire western front.-Overview:...
27 Battle of the Canal du Nord
Battle of the Canal du Nord
The Battle of Canal du Nord was part of a general Allied offensive against German positions on the Western Front during the Hundred Days Offensive of World War I. The battle took place in the Nord-Pas-de-Calais region of France, along an incomplete portion of the Canal du Nord and on the outskirts...
29 Battle of St. Quentin Canal