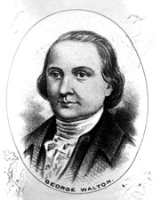 Encyclopedia
The Governor of Georgia is the head of the executive branch of Georgia's
Georgia (U.S. state)
Georgia is a state located in the southeastern United States. It was established in 1732, the last of the original Thirteen Colonies. The state is named after King George II of Great Britain. Georgia was the fourth state to ratify the United States Constitution, on January 2, 1788...
government
Government of Georgia (U.S. state)
The state government of Georgia is the U.S. state governmental body established by the Georgia State Constitution. It is a republican government with three branches: the legislature, executive, and judiciary...
and the commander-in-chief of the U.S. state
U.S. state
A U.S. state is any one of the 50 federated states of the United States of America that share sovereignty with the federal government. Because of this shared sovereignty, an American is a citizen both of the federal entity and of his or her state of domicile. Four states use the official title of...
's military forces
Georgia National Guard
The Georgia National Guard is the National Guard of the U.S state of Georgia consists of the Georgia Army National Guard and the Georgia Air National Guard...
.

For the period before independence, see the list of colonial governors of Georgia.


Georgia was one of the original Thirteen Colonies
Thirteen Colonies
The Thirteen Colonies were English and later British colonies established on the Atlantic coast of North America between 1607 and 1733. They declared their independence in the American Revolution and formed the United States of America...
and ratified the Constitution of the United States on January 2, 1788. Before it declared its independence, Georgia was a colony
Province of Georgia
The Province of Georgia was one of the Southern colonies in British America. It was the last of the thirteen original colonies established by Great Britain in what later became the United States...
of the Kingdom of Great Britain
Kingdom of Great Britain
The former Kingdom of Great Britain, sometimes described as the 'United Kingdom of Great Britain', That the Two Kingdoms of Scotland and England, shall upon the 1st May next ensuing the date hereof, and forever after, be United into One Kingdom by the Name of GREAT BRITAIN. was a sovereign...
. Like most early states, Georgia had claims to western areas, but did not cede
State cessions
The state cessions are those areas of the United States that the separate states ceded to the federal government in the late 18th and early 19th century...
its claims during the formation of the country like the other states. It sold this area, the Yazoo Lands
Yazoo lands
The Yazoo lands were the sparsely-populated central and western areas of the U.S. state of Georgia, when its western border stretched back to the Mississippi River. It was named for the Yazoo tribe of Native Americans. Several other places and things were named Yazoo, either for or along with the...
, to the federal government on April 24, 1802, when it was assigned to Mississippi Territory
Mississippi Territory
The Territory of Mississippi was an organized incorporated territory of the United States that existed from April 7, 1798, until December 10, 1817, when the final extent of the territory was admitted to the Union as the state of Mississippi....
.

In the Rules and Regulations of 1776, considered by some to be the first constitution, the chief executive was a president chosen by the legislature every six months. This was quickly superseded by the 1777 constitution, which called for a governor to be chosen by the legislature each year, with a term limited to one year out of every three. In the event of a vacancy, the president of the executive council acted as governor. The governor's term was lengthened to two years in the 1789 constitution. The 1798 constitution modified succession so that the president of the senate would act as governor should that office become vacant. An 1818 amendment to that constitution extended the line of succession to the speaker of the house, and an 1824 amendment provided for popular election of the governor.

While the 1861 secessionist constitution kept the office the same, the other constitutions surrounding the American Civil War
American Civil War
The American Civil War was a civil war fought in the United States of America. In response to the election of Abraham Lincoln as President of the United States, 11 southern slave states declared their secession from the United States and formed the Confederate States of America ; the other 25...
brought lots of changes. The 1865 constitution, following Georgia's surrender, limited governors to two consecutive terms, allowing them to serve again after a gap of four years. The Reconstruction constitution of 1868 increased the governor's term to four years. The 1877 constitution, after local rule was re-established, returned the office to the provisions of the 1865 constitution. An amendment in 1941 lengthened terms to 4 years, but governors could no longer succeed themselves, having to wait four years to serve again.

This is a table of congressional seats, other federal offices, and Confederate offices held by governors. All representatives and senators mentioned represented Georgia. * denotes those offices which the governor resigned to take.

, six former governors were alive, the oldest being Jimmy Carter
Jimmy Carter
James Earl "Jimmy" Carter, Jr. is an American politician who served as the 39th President of the United States and was the recipient of the 2002 Nobel Peace Prize, the only U.S. President to have received the Prize after leaving office...
(1971–1975, born 1924).