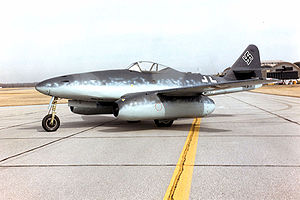 Jet aircraft
Jet aircraft
A jet aircraft is an aircraft propelled by jet engines. Jet aircraft generally fly much faster than propeller-powered aircraft and at higher altitudes – as high as . At these altitudes, jet engines achieve maximum efficiency over long distances. The engines in propeller-powered aircraft...
made their World War II
World War II
World War II, or the Second World War , was a global conflict lasting from 1939 to 1945, involving most of the world's nations—including all of the great powers—eventually forming two opposing military alliances: the Allies and the Axis...
combat debut when Leutnant
Second Lieutenant
Second lieutenant is a junior commissioned officer military rank in many armed forces.- United Kingdom and Commonwealth :The rank second lieutenant was introduced throughout the British Army in 1871 to replace the rank of ensign , although it had long been used in the Royal Artillery, Royal...
Alfred Schreiber
Alfred Schreiber
Alfred Schreiber , nicknamed "Bubi", was a German Luftwaffe fighter ace. He is noted for claiming the first aerial victory by a jet fighter in aviation history. He was born in Keplachowitz....
, flying Messerschmitt Me 262 A-1a
Messerschmitt Me 262
The Messerschmitt Me 262 Schwalbe was the world's first operational jet-powered fighter aircraft. Design work started before World War II began, but engine problems prevented the aircraft from attaining operational status with the Luftwaffe until mid-1944...
W.Nr. 130 017 (German language
German language
German is a West Germanic language, related to and classified alongside English and Dutch. With an estimated 90 – 98 million native speakers, German is one of the world's major languages and is the most widely-spoken first language in the European Union....
: Werknummer - factory number), attacked a No. 540 Squadron
No. 540 Squadron RAF
No. 540 Squadron RAF was a photo-reconnasissance squadron of the Royal Air Force from 1942 to 1956.-Formation and World War II:The squadron was formed on 19 October 1942 from 'H' and 'L' flights of No...
Royal Air Force
Royal Air Force
The Royal Air Force is the aerial warfare service branch of the British Armed Forces. Formed on 1 April 1918, it is the oldest independent air force in the world...
Mosquito PR XVI
De Havilland Mosquito
The de Havilland DH.98 Mosquito was a British multi-role combat aircraft that served during the Second World War and the postwar era. It was known affectionately as the "Mossie" to its crews and was also nicknamed "The Wooden Wonder"...
(a photo-reconnaissance aircraft
Reconnaissance aircraft
A reconnaissance aircraft is a manned military aircraft designed, or adapted, to carry out aerial reconnaissance.-History:The majority of World War I aircraft were reconnaissance designs...
) over the Alps
Alps
The Alps is one of the great mountain range systems of Europe, stretching from Austria and Slovenia in the east through Italy, Switzerland, Liechtenstein and Germany to France in the west....
on 26 July 1944.

Although often referred to as the first aerial victory by a jet fighter in aviation history, the damaged Mosquito managed to return to an Allied
Allies of World War II
The Allies of World War II were the countries that opposed the Axis powers during the Second World War . Former Axis states contributing to the Allied victory are not considered Allied states...
airfield in Italy
Italy
Italy , officially the Italian Republic languages]] under the European Charter for Regional or Minority Languages. In each of these, Italy's official name is as follows:;;;;;;;;), is a unitary parliamentary republic in South-Central Europe. To the north it borders France, Switzerland, Austria and...
. The first jet victory was therefore the confirmed destruction of another No. 540 Squadron reconnaissance Mosquito PR XVI, which was shot down by Leutnant Joachim Weber over Ohlstadt
Ohlstadt
Ohlstadt is a municipality in the district of Garmisch-Partenkirchen, in Bavaria, Germany.-External links:*...
on 8 August 1944.

By 1944-45 the German
Germany
Germany , officially the Federal Republic of Germany , is a federal parliamentary republic in Europe. The country consists of 16 states while the capital and largest city is Berlin. Germany covers an area of 357,021 km2 and has a largely temperate seasonal climate...
Luftwaffe
Luftwaffe
Luftwaffe is a generic German term for an air force. It is also the official name for two of the four historic German air forces, the Wehrmacht air arm founded in 1935 and disbanded in 1946; and the current Bundeswehr air arm founded in 1956....
committed three new types of jet- or rocket-propelled fighters to combat operations. Besides the Me 262, the rocket propelled Me 163 "Komet"
Messerschmitt Me 163
The Messerschmitt Me 163 Komet, designed by Alexander Lippisch, was a German rocket-powered fighter aircraft. It is the only rocket-powered fighter aircraft ever to have been operational. Its design was revolutionary, and the Me 163 was capable of performance unrivaled at the time. Messerschmitt...
and the He 162 "Volksjäger"
Heinkel He 162
The Heinkel He 162 Volksjäger was a German single-engine, jet-powered fighter aircraft fielded by the Luftwaffe in World War II. Designed and built quickly, and made primarily of wood as metals were in very short supply and prioritised for other aircraft, the He 162 was nevertheless the fastest of...
had become operational. Although a few claims were made by pilots of the Me 163 and He 162, no pilot achieved ace status on either of these two types.

The list is initially sorted by the number of jet victories claimed.

Kurt Welter is credited in excess of 20 aerial victories while flying the Me 262, but the exact number is disputed.