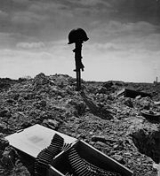 Encyclopedia
Killed in action is a casualty
Casualty (person)
A casualty is a person who is the victim of an accident, injury, or trauma. The word casualties is most often used by the news media to describe deaths and injuries resulting from wars or disasters...
classification generally used by militaries
Military
A military is an organization authorized by its greater society to use lethal force, usually including use of weapons, in defending its country by combating actual or perceived threats. The military may have additional functions of use to its greater society, such as advancing a political agenda e.g...
to describe the deaths of their own forces at the hands of hostile forces. The United States
United States
The United States of America is a federal constitutional republic comprising fifty states and a federal district...
Department of Defense
United States Department of Defense
The United States Department of Defense is the U.S...
, for example, says that those declared KIA need not have fired their weapons but have been killed due to hostile attack. KIAs do not come from incidents such as accidental vehicle crashes and other "non-hostile" events or terrorism. KIA can be applied both to front-line combat troops and to naval, air and support troops. Someone who is killed in action during a particular event is denoted with a † beside their name to signify their death in that event.

Further, KIA denotes one to have been killed in action on the battlefield whereas died of wounds (or DOW) relates to someone who survived to reach a medical treatment facility. The North Atlantic Treaty Organization (NATO) also uses DWRIA, rather than DOW, for "died of wounds received in action." However, historically, militaries and historians have used the former acronym.

KIFA means 'killed in flight accident'. This term is used when personnel are killed in an aerial mishap that did not result from hostile action.

Many societies venerate those killed in action. They set aside days of remembrance for their militaries and combat dead, and they build memorials and cenotaph
Cenotaph
A cenotaph is an "empty tomb" or a monument erected in honour of a person or group of people whose remains are elsewhere. It can also be the initial tomb for a person who has since been interred elsewhere. The word derives from the Greek κενοτάφιον = kenotaphion...
s in honor of their fallen. The families of those who die in combat, especially their next-of-kin, sometimes receive preferential treatment, such as military honors, exemption from taxes, and financial awards. National militaries also distinguish those killed in action with ceremonies
Ceremony
A ceremony is an event of ritual significance, performed on a special occasion. The word may be of Etruscan origin.-Ceremonial occasions:A ceremony may mark a rite of passage in a human life, marking the significance of, for example:* birth...
and awards. They also build walls and memorials to honor those who died.
Other awards are posthumously given, such as Purple Hearts, promotions, and other such medals.

The city of Irvine, CA erected the nation's first and only memorial to ongoing wars. This was dedicated in 2010 and was more than half filled (capacity: 8000 names) at dedication. See Irvine Long War Memorial. It will be updated annually as more deaths occur.

NATO defines a battle casualty as when a soldier is killed outright or who dies as a result of wounds or other injuries before reaching a medical treatment facility.