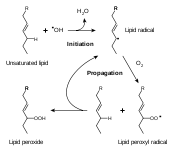 Lipid peroxidation refers to the oxidative
Redox
Redox reactions describe all chemical reactions in which atoms have their oxidation state changed....
degradation of lipid
Lipid
Lipids constitute a broad group of naturally occurring molecules that include fats, waxes, sterols, fat-soluble vitamins , monoglycerides, diglycerides, triglycerides, phospholipids, and others...
s. It is the process in which free radicals
Radical (chemistry)
Radicals are atoms, molecules, or ions with unpaired electrons on an open shell configuration. Free radicals may have positive, negative, or zero charge...
"steal" electrons from the lipids in cell membranes, resulting in cell damage. This process proceeds by a free radical chain reaction
Chemical reaction
A chemical reaction is a process that leads to the transformation of one set of chemical substances to another. Chemical reactions can be either spontaneous, requiring no input of energy, or non-spontaneous, typically following the input of some type of energy, such as heat, light or electricity...
mechanism. It most often affects polyunsaturated fatty acids, because they contain multiple double bonds in between which lie methylene
Methylene
Methylene is a chemical species in which a carbon atom is bonded to two hydrogen atoms. Three different possibilities present themselves:* the -CH2- substituent group: e.g., dichloromethane ....
-CH2- groups that possess especially reactive hydrogen
Hydrogen
Hydrogen is the chemical element with atomic number 1. It is represented by the symbol H. With an average atomic weight of , hydrogen is the lightest and most abundant chemical element, constituting roughly 75% of the Universe's chemical elemental mass. Stars in the main sequence are mainly...
s. As with any radical reaction, the reaction consists of three major steps: initiation, propagation, and termination.

The fatty acid radical
Acid radical
An acid radical is an anion left after removal of hydrogen atoms from an acid, for example NO3- and SO4-.-External links:*...
is not a very stable molecule
Molecule
A molecule is an electrically neutral group of at least two atoms held together by covalent chemical bonds. Molecules are distinguished from ions by their electrical charge...
, so it reacts readily with molecular oxygen, thereby creating a peroxyl-fatty acid radical. This too is an unstable species that reacts with another free fatty acid, producing a different fatty acid radical and a lipid peroxide, or a cyclic peroxide if it had reacted with itself. This cycle continues, as the new fatty acid radical reacts in the same way.

When a radical reacts with a non-radical, it always produces another radical, which is why the process is called a "chain reaction mechanism." The radical reaction stops when two radicals react and produce a non-radical species. This happens only when the concentration of radical species is high enough for there to be a high probability of collision of two radicals. Living organisms have evolved different molecules that speed up termination by catching free radicals and, therefore, protecting the cell membrane. One important such antioxidant
Antioxidant
An antioxidant is a molecule capable of inhibiting the oxidation of other molecules. Oxidation is a chemical reaction that transfers electrons or hydrogen from a substance to an oxidizing agent. Oxidation reactions can produce free radicals. In turn, these radicals can start chain reactions. When...
is vitamin E
Vitamin E
Vitamin E is used to refer to a group of fat-soluble compounds that include both tocopherols and tocotrienols. There are many different forms of vitamin E, of which γ-tocopherol is the most common in the North American diet. γ-Tocopherol can be found in corn oil, soybean oil, margarine and dressings...
. Other anti-oxidants made within the body include the enzymes superoxide dismutase
Superoxide dismutase
Superoxide dismutases are a class of enzymes that catalyze the dismutation of superoxide into oxygen and hydrogen peroxide. As such, they are an important antioxidant defense in nearly all cells exposed to oxygen...
, catalase
Catalase
Catalase is a common enzyme found in nearly all living organisms that are exposed to oxygen, where it catalyzes the decomposition of hydrogen peroxide to water and oxygen...
, and peroxidase
Peroxidase
Peroxidases are a large family of enzymes that typically catalyze a reaction of the form:For many of these enzymes the optimal substrate is hydrogen peroxide, but others are more active with organic hydroperoxides such as lipid peroxides...
.

If not terminated fast enough, there will be damage to the cell membrane
Cell membrane
The cell membrane or plasma membrane is a biological membrane that separates the interior of all cells from the outside environment. The cell membrane is selectively permeable to ions and organic molecules and controls the movement of substances in and out of cells. It basically protects the cell...
, which consists mainly of lipids. Phototherapy may cause hemolysis
Hemolysis
Hemolysis —from the Greek meaning "blood" and meaning a "loosing", "setting free" or "releasing"—is the rupturing of erythrocytes and the release of their contents into surrounding fluid...
by rupturing red blood cell
Red blood cell
Red blood cells are the most common type of blood cell and the vertebrate organism's principal means of delivering oxygen to the body tissues via the blood flow through the circulatory system...
cell membranes in this way

In addition, end-products of lipid peroxidation may be mutagenic and carcinogenic. For instance, the end-product malondialdehyde
Malondialdehyde
Malondialdehyde is the organic compound with the formula CH22. The structure of this species is more complex than this formula suggests. This reactive species occurs naturally and is a marker for oxidative stress.- Structure and synthesis :...
reacts with deoxyadenosine
Deoxyadenosine
Deoxyadenosine is a deoxyribonucleoside. It is a derivative of the nucleoside adenosine, differing from the latter by the replacement of a hydroxyl group by hydrogen at the 2' position of its ribose sugar moiety. Deoxyadenosine is the DNA nucleoside A, which pairs with deoxythymidine in...
and deoxyguanosine
Deoxyguanosine
Deoxyguanosine is composed of the purine nucleoside guanine linked by its N9 nitrogen to the C1 carbon of deoxyribose. It is similar to guanosine, but with one hydroxyl group removed from the 2' position of the ribose sugar . If a phosphate group is attached at the 5' position, it becomes...
in DNA, forming DNA adducts to them, primarily M1G
M1G
M1G is a heterocyclic compound which is a by-product of base excision repair of a specific type of DNA adduct called M1dG. The M1dG adduct in turn is formed by a condensation reaction between guanosine nucleotides in DNA and either malondialdehyde or base propenal...
.

Certain diagnostic tests are available for the quantification of the end-products of lipid peroxidation, to be specific, malondialdehyde
Malondialdehyde
Malondialdehyde is the organic compound with the formula CH22. The structure of this species is more complex than this formula suggests. This reactive species occurs naturally and is a marker for oxidative stress.- Structure and synthesis :...
(MDA) The most commonly used test is called a TBARS Assay (thiobarbituric acid
Thiobarbituric acid
Thiobarbituric acid is an organic compound and a heterocycle. It is used as a reagent in assaying malondialdehyde .TBARS are higher in people who have headaches...
reactive substances assay). Thiobarbituric acid reacts with malondialdehyde to yield a fluorescent product. However, there are other sources of malondialdehyde, so this test is not completely specific for lipid peroxidation. TBARS levels are higher in people who have headaches
The source of this article is wikipedia, the free encyclopedia.  The text of this article is licensed under the GFDL.