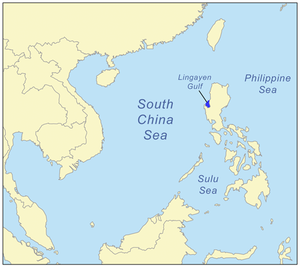 The Lingayen Gulf is an extension of the South China Sea
South China Sea
The South China Sea is a marginal sea that is part of the Pacific Ocean, encompassing an area from the Singapore and Malacca Straits to the Strait of Taiwan of around...
on Luzon
Luzon
Luzon is the largest island in the Philippines. It is located in the northernmost region of the archipelago, and is also the name for one of the three primary island groups in the country centered on the Island of Luzon...
in the Philippines
Philippines
The Philippines , officially known as the Republic of the Philippines , is a country in Southeast Asia in the western Pacific Ocean. To its north across the Luzon Strait lies Taiwan. West across the South China Sea sits Vietnam...
stretching 56 km (34.8 mi). It is framed by the provinces of Pangasinan
Pangasinan
Pangasinan is a province of the Republic of the Philippines. The provincial capital is Lingayen. Pangasinan is located on the west central and peripheral area of the island of Luzon along the Lingayen Gulf, with the total land area being 5,368.82 square kilometers . According to the latest census,...
and La Union
La Unión
La Union or La Unión may refer to:-Colombia:*La Unión, Antioquia*La Unión, Nariño*La Unión, Sucre*La Unión, Valle del Cauca-Peru:*La Unión Province, Peru...
and sits between the Zambales Mountains
Zambales Mountains
The Zambales Mountains is a mountain range located on western Luzon island in the Philippines. The mountains separate Luzon's central plain from the South China Sea. Its most prominent section is known as the Tri-Cabusilan Mountain Range composed of Mt. Pinatubo, Mount Negron and Mount Cuadrado...
and the Cordillera Central
Cordillera Central, Luzon
The Cordillera Central is a massive mountain range situated in the northern central part of the island of Luzon, in the Philippines. Several provinces bound it, namely Benguet, Abra, Kalinga, Apayao, Mountain Province, Ifugao, and Baguio, a chartered city located entirely within Benguet...
. The Agno River
Agno River
Agno River is a river in the Philippine island of Luzon, in the province of Pangasinan. It is the fifth largest river system in the country with drainage area of 5,952 km². It originates in the Cordillera Mountains and empties into the South China Sea via the Cordillera Mountains...
drains into Lingayen Gulf.

At 09:30 on 9 January 1945, the U.S. 6th Army conducted an amphibious landing on the gulf, following a devastating naval bombardment, with 68,000 troops landing on the first day alone and a total of 203,608 in subsequent landings along a 20 mi (32.2 km) beachhead, stretching from Sual, Lingayen and Dagupan (XIV Corps) to the west, and San Fabian (I Corps) in to the east. The total number of troops under the command of MacArthur was reported to have even exceeded the number that Eisenhower
Dwight D. Eisenhower
Dwight David "Ike" Eisenhower was the 34th President of the United States, from 1953 until 1961. He was a five-star general in the United States Army...
controlled in Europe.

Despite their success in driving out the Japanese army stationed there, they suffered relatively heavy losses, particularly to their convoys due to kamikaze
Kamikaze
The were suicide attacks by military aviators from the Empire of Japan against Allied naval vessels in the closing stages of the Pacific campaign of World War II, designed to destroy as many warships as possible....
suicide attacks. From 4–12 January, a total of 24 ships were sunk and 67 damaged by kamikaze planes, including the battleship
Battleship
A battleship is a large armored warship with a main battery consisting of heavy caliber guns. Battleships were larger, better armed and armored than cruisers and destroyers. As the largest armed ships in a fleet, battleships were used to attain command of the sea and represented the apex of a...
s and (accidentally hit by friendly fire), light cruiser
Light cruiser
A light cruiser is a type of small- or medium-sized warship. The term is a shortening of the phrase "light armored cruiser", describing a small ship that carried armor in the same way as an armored cruiser: a protective belt and deck...
, and minesweeper
Minesweeper (ship)
A minesweeper is a small naval warship designed to counter the threat posed by naval mines. Minesweepers generally detect then neutralize mines in advance of other naval operations.-History:...
s and . Following the landings, the Lingayen Gulf was turned into a vast supply depot for the rest of the war to support the American and Filipino assault on Manila
Manila
Manila is the capital of the Philippines. It is one of the sixteen cities forming Metro Manila.Manila is located on the eastern shores of Manila Bay and is bordered by Navotas and Caloocan to the north, Quezon City to the northeast, San Juan and Mandaluyong to the east, Makati on the southeast,...
.

On January 9, 2008, Gov. Amado Espino, Jr. and Vice Gov. Marlyn Primicias-Agabas institutionalized the commemoration to honor the war veterans. The resolution named January 9 as Pangasinan
Pangasinan
Pangasinan is a province of the Republic of the Philippines. The provincial capital is Lingayen. Pangasinan is located on the west central and peripheral area of the island of Luzon along the Lingayen Gulf, with the total land area being 5,368.82 square kilometers . According to the latest census,...
Veterans’ Day. In the 63rd anniversary commemoration of the Lingayen Gulf Landing
Invasion of Lingayen Gulf
The Liberation of Lingayen Gulf was an Allied amphibious operation in the Philippines during World War II. In the early morning of 9 January 1945, an Allied force commanded by Admiral Jesse B. Oldendorf began approaching the shores of Lingayen. U.S...
, President Fidel Ramos appealed to U.S. President George W. Bush
George W. Bush
George Walker Bush is an American politician who served as the 43rd President of the United States, from 2001 to 2009. Before that, he was the 46th Governor of Texas, having served from 1995 to 2000....
for 24,000 surviving war veterans, to pass two legislative bills pending since 1968 at the US House of Representatives — the Filipino Veterans’ Equity Act of 2006 and the Filipino Veterans’ Equity of 2005 sponsored by former Senator Daniel Inouye
Daniel Inouye
Daniel Ken "Dan" Inouye is the senior United States Senator from Hawaii, a member of the Democratic Party, and the President pro tempore of the United States Senate making him the highest-ranking Asian American politician in American history. Inouye is the chairman of the United States Senate...
.

Fishing
Fishing
Fishing is the activity of trying to catch wild fish. Fish are normally caught in the wild. Techniques for catching fish include hand gathering, spearing, netting, angling and trapping....
and salt
Salt
In chemistry, salts are ionic compounds that result from the neutralization reaction of an acid and a base. They are composed of cations and anions so that the product is electrically neutral...
-making are the primary industries on Lingayen Gulf. In fact, the name Pangasinan literally means “place where salt is made”. Salt is collected from seawater
Seawater
Seawater is water from a sea or ocean. On average, seawater in the world's oceans has a salinity of about 3.5% . This means that every kilogram of seawater has approximately of dissolved salts . The average density of seawater at the ocean surface is 1.025 g/ml...
through evaporation, leaving the crystalline salt behind.
The source of this article is wikipedia, the free encyclopedia.  The text of this article is licensed under the GFDL.