Encyclopedia
The ligand cone angle is a measure of the size of a ligand
Ligand
In coordination chemistry, a ligand is an ion or molecule that binds to a central metal atom to form a coordination complex. The bonding between metal and ligand generally involves formal donation of one or more of the ligand's electron pairs. The nature of metal-ligand bonding can range from...
. It is defined as the solid angle
Solid angle
The solid angle, Ω, is the two-dimensional angle in three-dimensional space that an object subtends at a point. It is a measure of how large that object appears to an observer looking from that point...
formed with the metal at the vertex and the hydrogen atoms at the perimeter of the cone (see figure). Tertiary phosphine ligands are commonly classified using this parameter, but the method can be applied to any ligand. The term cone angle was introduced by Chadwick A. Tolman
Chadwick A. Tolman
Chadwick A. Tolman is an American chemist. He obtained his B.S. in Chemistry from Massachusetts Institute of Technology. He earned his Ph.D. in Chemistry as a microwave spectroscopist from U.C. Berkeley under the guidance of Professor William Gwinn.He joined DuPont Central Research in 1965. ...
, a research chemist at Dupont. Originally applied to phosphines, these cone angles were originally determined by building scale models of these phosphines, and physically measuring the angle of the cone by a home-made device. 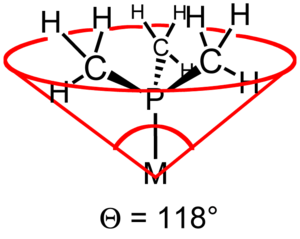 The concept of cone angle is most easily visualized with symmetrical ligands, e.g. PR3. But the approach has been refined to include less symmetrical ligands of the type PRR'R" as well as diphosphines. In such asymmetric cases the substituent angles half angles, θi/2, are averaged and then doubled to find the total cone angle, θ. In the case of diphosphines the θi/2 of the backbone is approximated as half the chelate bite angle
Bite angle
The bite angle is a geometric parameter used to classify chelating ligands in inorganic and organometallic chemistry. Together with ligand cone angle, this parameter is relevant to diphosphine ligands, which are used in industrial processes such as hydroformylation and hydrocyanation...
assuming a bite angle of 74, 85, 90 deg. for diphosphines with methylene, ethylene, and propylene back bones respectively.

The Tolman cone angles assume empirical bond data and defines the perimeter as the maximum possible circumscription of an idealized free spinning substituent. In contrast the solid-angle concept derives both bond length and the perimeter form empirical solid state crystal structures. There are advantages to each system.