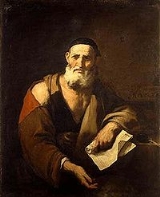 Encyclopedia
Leucippus or Leukippos (Greek:
Greek language
Greek is an independent branch of the Indo-European family of languages. Native to the southern Balkans, it has the longest documented history of any Indo-European language, spanning 34 centuries of written records. Its writing system has been the Greek alphabet for the majority of its history;...
, first half of 5th century BCE) was one of the earliest Greeks to develop the theory of atomism
Atomism
Atomism is a natural philosophy that developed in several ancient traditions. The atomists theorized that the natural world consists of two fundamental parts: indivisible atoms and empty void.According to Aristotle, atoms are indestructible and immutable and there are an infinite variety of shapes...
— the idea that everything is composed entirely of various imperishable, indivisible elements called atom
Atom
The atom is a basic unit of matter that consists of a dense central nucleus surrounded by a cloud of negatively charged electrons. The atomic nucleus contains a mix of positively charged protons and electrically neutral neutrons...
s — which was elaborated in greater detail by his pupil and successor, Democritus
Democritus
Democritus was an Ancient Greek philosopher born in Abdera, Thrace, Greece. He was an influential pre-Socratic philosopher and pupil of Leucippus, who formulated an atomic theory for the cosmos....
. A possible earlier candidate for atomism is Mochus
Mochus
Mochus a Phoenician, is listed, along with Zalmoxis and Atlas, by Diogenes Laërtius as a proto-philosopher. Athenaeus claimed that he authored a work on the history of Phoenicia. Strabo, on the authority of Posidonius, speaks of one Mochus or Moschus of Sidon as the author of the atomic theory and...
of Sidon
Sidon
Sidon or Saïda is the third-largest city in Lebanon. It is located in the South Governorate of Lebanon, on the Mediterranean coast, about 40 km north of Tyre and 40 km south of the capital Beirut. In Genesis, Sidon is the son of Canaan the grandson of Noah...
, from the Trojan War
Trojan War
In Greek mythology, the Trojan War was waged against the city of Troy by the Achaeans after Paris of Troy took Helen from her husband Menelaus, the king of Sparta. The war is among the most important events in Greek mythology and was narrated in many works of Greek literature, including the Iliad...
era (13th or 12th century BCE).

He was most likely born in Miletus
Miletus
Miletus was an ancient Greek city on the western coast of Anatolia , near the mouth of the Maeander River in ancient Caria...
, although Abdera
Abdera, Thrace
Abdera was a city-state on the coast of Thrace 17 km east-northeast of the mouth of the Nestos, and almost opposite Thasos. The site now lies in the Xanthi peripheral unit of modern Greece. The municipality of Abdera, or Ávdira , has 18,573 inhabitants...
and Elea
Velia
Velia is the Italian name of the ancient town of Elea located on the territory of the comune of Ascea, Salerno, Campania, Italy in a geographical sub-area named Cilento...
are also mentioned as possible birth-places.

Leucippus is a shadowy figure, as his dates are not recorded and he is often mentioned in conjunction with his more well-known pupil Democritus, who replaced indeterminism
Indeterminism
Indeterminism is the concept that events are not caused, or not caused deterministically by prior events. It is the opposite of determinism and related to chance...
with determinism
Determinism
Determinism is the general philosophical thesis that states that for everything that happens there are conditions such that, given them, nothing else could happen. There are many versions of this thesis. Each of them rests upon various alleged connections, and interdependencies of things and...
as the ontological cause of atomic movement. It is therefore difficult to determine which contributions come from Democritus and which come from Leucippus.

In his Corpus Democriteum, Thrasyllus of Alexandria, an astrologer and writer living under the emperor Tiberius
Tiberius
Tiberius , was Roman Emperor from 14 AD to 37 AD. Tiberius was by birth a Claudian, son of Tiberius Claudius Nero and Livia Drusilla. His mother divorced Nero and married Augustus in 39 BC, making him a step-son of Octavian...
(14-37 CE) compiled a list of writings traditionally attributed to Democritus to the exclusion of Leucippus.

Leucippus was an Ionian Greek (Ionia
Ionia
Ionia is an ancient region of central coastal Anatolia in present-day Turkey, the region nearest İzmir, which was historically Smyrna. It consisted of the northernmost territories of the Ionian League of Greek settlements...
, now part of western Turkey), as was Anaxagoras
Anaxagoras
Anaxagoras was a Pre-Socratic Greek philosopher. Born in Clazomenae in Asia Minor, Anaxagoras was the first philosopher to bring philosophy from Ionia to Athens. He attempted to give a scientific account of eclipses, meteors, rainbows, and the sun, which he described as a fiery mass larger than...
. And he was a contemporary of Zeno of Elea
Zeno of Elea
Zeno of Elea was a pre-Socratic Greek philosopher of southern Italy and a member of the Eleatic School founded by Parmenides. Aristotle called him the inventor of the dialectic. He is best known for his paradoxes, which Bertrand Russell has described as "immeasurably subtle and profound".- Life...
and Empedocles
Empedocles
Empedocles was a Greek pre-Socratic philosopher and a citizen of Agrigentum, a Greek city in Sicily. Empedocles' philosophy is best known for being the originator of the cosmogenic theory of the four Classical elements...
(Magna Graecia
Magna Graecia
Magna Græcia is the name of the coastal areas of Southern Italy on the Tarentine Gulf that were extensively colonized by Greek settlers; particularly the Achaean colonies of Tarentum, Crotone, and Sybaris, but also, more loosely, the cities of Cumae and Neapolis to the north...
, now part of southern Italy). He belonged to the same Ionian School of naturalistic philosophy
Natural philosophy
Natural philosophy or the philosophy of nature , is a term applied to the study of nature and the physical universe that was dominant before the development of modern science...
as Thales
Thales
Thales of Miletus was a pre-Socratic Greek philosopher from Miletus in Asia Minor, and one of the Seven Sages of Greece. Many, most notably Aristotle, regard him as the first philosopher in the Greek tradition...
, Anaximander
Anaximander
Anaximander was a pre-Socratic Greek philosopher who lived in Miletus, a city of Ionia; Milet in modern Turkey. He belonged to the Milesian school and learned the teachings of his master Thales...
, Anaximenes
Anaximenes
Anaximenes may refer to:*Anaximenes of Lampsacus , Greek rhetorician and historian*Anaximenes of Miletus , Greek pre-Socratic philosopher*Anaximenes , a lunar crater...
, and he was interested in reality
Realism
Realism, Realist or Realistic are terms that describe any manifestation of philosophical realism, the belief that reality exists independently of observers, whether in philosophy itself or in the applied arts and sciences. In this broad sense it is frequently contrasted with Idealism.Realism in the...
and not idealism
Idealism
In philosophy, idealism is the family of views which assert that reality, or reality as we can know it, is fundamentally mental, mentally constructed, or otherwise immaterial. Epistemologically, idealism manifests as a skepticism about the possibility of knowing any mind-independent thing...
as the Italic Eleatics
Eleatics
The Eleatics were a school of pre-Socratic philosophers at Elea , a Greek colony in Campania, Italy. The group was founded in the early fifth century BCE by Parmenides. Other members of the school included Zeno of Elea and Melissus of Samos...
were. Later stories about the influence of Zeno have been questioned by modern studies, also because the ontological conception of being
Being
Being , is an English word used for conceptualizing subjective and objective aspects of reality, including those fundamental to the self —related to and somewhat interchangeable with terms like "existence" and "living".In its objective usage —as in "a being," or "[a] human being" —it...
of the Eleatics is static, monistic and deterministic, while Leucippus' is dynamic, pluralistic and indeterministic
Indeterminism
Indeterminism is the concept that events are not caused, or not caused deterministically by prior events. It is the opposite of determinism and related to chance...
.

Around 440 or 430 BCE Leucippus founded a school at Abdera, which his pupil, Democritus, was closely associated with. His fame was so completely overshadowed by that of Democritus, who systematized his views on atoms, that Epicurus
Epicurus
Epicurus was an ancient Greek philosopher and the founder of the school of philosophy called Epicureanism.Only a few fragments and letters remain of Epicurus's 300 written works...
doubted his very existence.

However, Aristotle
Aristotle
Aristotle was a Greek philosopher and polymath, a student of Plato and teacher of Alexander the Great. His writings cover many subjects, including physics, metaphysics, poetry, theater, music, logic, rhetoric, linguistics, politics, government, ethics, biology, and zoology...
and Theophrastus
Theophrastus
Theophrastus , a Greek native of Eresos in Lesbos, was the successor to Aristotle in the Peripatetic school. He came to Athens at a young age, and initially studied in Plato's school. After Plato's death he attached himself to Aristotle. Aristotle bequeathed to Theophrastus his writings, and...
explicitly credit Leucippus with the invention of Atomism. Leucippus agreed with the Eleatic argument that true being does not admit of vacuum, and there can be no movement in the absence of vacuum. Leucippus contended that since movement exists, there has to be vacuum. However, he concludes that vacuum is identified with non-being, since it cannot really be. Leucippus differed from the Eleatics in not being encumbered by the conceptual intermingling of being and non-being. Plato
Plato
Plato , was a Classical Greek philosopher, mathematician, student of Socrates, writer of philosophical dialogues, and founder of the Academy in Athens, the first institution of higher learning in the Western world. Along with his mentor, Socrates, and his student, Aristotle, Plato helped to lay the...
made the necessary distinction between grades of being and types of negation.

The most famous among Leucippus' lost works were titled Megas Diakosmos (The Great Order of the Universe or The great world-system and is not to confuse with Micros Diakosmos (Little Cosmology) of Democritus) and Peri Nou (On mind)).

Fragments and doxographical reports about Leucippus were collected by Hermann Diels (1848–1922), firstly in Doxographi Graeci (Berlin, 1879, reprint Berlin: de Gruyter, 1929) and then in Die Fragmente der Vorsokratiker, Berlin, 1903, 6th ed., rev. by Walther Kranz (Berlin: Weidmann, 1952; the editions after the 6th are mainly reprints with little or no change.) The probably true fragment of Leucippus is the Great Cosmology fragment that says: "The cosmos, then, became like a spherical form in this way: the atoms being submitted to a casual and unpredictable movement, quickly and incessantly." (24, I, 1)