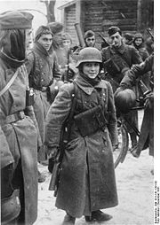 The Legion of French Volunteers was mainly made up of right-wing Frenchmen and French prisoners of war who preferred fighting to forced labor in Germany. Another unit formed in France, the Tricolor Regiment (La Légion Tricolore) was absorbed into the LVF six months later.

In October 1941, a French infantry regiment, 2,452 men strong, crossed the frontier of the Soviet Union
Soviet Union
The Soviet Union , officially the Union of Soviet Socialist Republics , was a constitutionally socialist state that existed in Eurasia between 1922 and 1991....
as part of the foreign contingent of the German invasion force.

During the spring of 1942, the Legion of French Volunteers was reorganized with only the 1st and 3rd battalions and spent the rest of its tour of duty on the Eastern Front fighting partisans
Partisan (military)
A partisan is a member of an irregular military force formed to oppose control of an area by a foreign power or by an army of occupation by some kind of insurgent activity...
in the rear areas.

In June 1943, the two independent battalions were again united in a single regiment and continued fighting partisans in Ukraine
Ukraine
Ukraine is a country in Eastern Europe. It has an area of 603,628 km², making it the second largest contiguous country on the European continent, after Russia...
.

On 1 September 1944, the Legion of French Volunteers was officially disbanded. It merged with the Milice
Milice
The Milice française , generally called simply Milice, was a paramilitary force created on January 30, 1943 by the Vichy Regime, with German aid, to help fight the French Resistance. The Milice's formal leader was Prime Minister Pierre Laval, though its chief of operations, and actual leader, was...
to create the SS Charlemagne Division
33rd Waffen Grenadier Division of the SS Charlemagne (1st French)
The 33. Waffen-Grenadier-Division der SS Charlemagne and Charlemagne Regiment are collective names used for units of French volunteers in the Wehrmacht and later Waffen-SS during World War II...
.

Though the French civil authority handed out many death sentences and prison terms to collaborators after the war, some Frenchmen who had fought for the Germans were given the option to redeem themselves by serving in the Foreign Legion
French Foreign Legion
The French Foreign Legion is a unique military service wing of the French Army established in 1831. The foreign legion was exclusively created for foreign nationals willing to serve in the French Armed Forces...
in French Indochina. Some of the higher ranking officers, however, were still executed, while rank-and-file members were given prison terms.

French volunteers wore German uniforms. But, like other foreign volunteers, the French were allowed to wear their national colors on the right sleeve of their German uniform and on the Stahlhelm
Stahlhelm
Stahlhelm is German for "steel helmet". The Imperial German Army began to replace the traditional boiled-leather Pickelhaube with the Stahlhelm during World War I in 1916...
. Both German and French decorations were worn.
The source of this article is wikipedia, the free encyclopedia.  The text of this article is licensed under the GFDL.