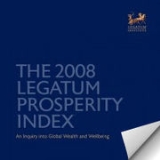 Encyclopedia
The Legatum Prosperity Index is an annual ranking developed by the Legatum Institute
Legatum
LEGATUM is a privately owned, international investment organisation, headquartered in Dubai, part of the United Arab Emirates. Legatum's mission is to find ways to generate and allocate the capital and ideas that help people live more prosperous lives....
of 110 countries. The ranking is based according to a variety of factors including wealth, economic growth, personal wellbeing, and quality of life. Norway
Norway
Norway , officially the Kingdom of Norway, is a Nordic unitary constitutional monarchy whose territory comprises the western portion of the Scandinavian Peninsula, Jan Mayen, and the Arctic archipelago of Svalbard and Bouvet Island. Norway has a total area of and a population of about 4.9 million...
topped the lists of the the last two reports, those of 2010 and 2011. 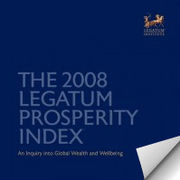 The 2010 Legatum Prosperity Index is based on 89 different variables analysed across 110 nations around the world. Source data includes Gallup World Poll, WTO, World Development Indicators
World Development Indicators
The World Development Indicators is the primary World Bank collection of development indicators, compiled from officially-recognized international sources. It presents the most current and accurate global development data available, and includes national, regional and global estimates. This...
, GDP, World Intellectual Property Organization
World Intellectual Property Organization
The World Intellectual Property Organization is one of the 17 specialized agencies of the United Nations. WIPO was created in 1967 "to encourage creative activity, to promote the protection of intellectual property throughout the world"....
, UN Human Development Report
Human Development Report
The Human Development Report is an annual milestone publication by the Human Development Report Office of the United Nations Development Programme .-History:...
, World Bank
World Bank
The World Bank is an international financial institution that provides loans to developing countries for capital programmes.The World Bank's official goal is the reduction of poverty...
, OECD, World Values Survey
World Values Survey
The World Values Survey is a global research project that explores people’s values and beliefs, how they change over time and what social and political impact they have. It is carried out by a worldwide network of social scientists who, since 1981, have conducted representative national surveys in...
. The 89 variables are grouped into 8 sub-indexes which are averaged using equal weights. The 8 sub-indexes are:


For example, Personal Freedom includes freedom of speech and religion, national tolerance for immigrants and ethnic and racial minorities. The Social Capital sub-index includes the percentage of citizens who volunteer, give to charity, help strangers, and who feel they can rely on family and friends.

The Legatum Institute, the publisher of the index, is a privately-funded think-tank founded in 2007 and located in Mayfair
Mayfair
Mayfair is an area of central London, within the City of Westminster.-History:Mayfair is named after the annual fortnight-long May Fair that took place on the site that is Shepherd Market today...
, London
London
London is the capital city of :England and the :United Kingdom, the largest metropolitan area in the United Kingdom, and the largest urban zone in the European Union by most measures. Located on the River Thames, London has been a major settlement for two millennia, its history going back to its...
. It is funded by the Legatum Group, which includes Legatum Capital, a portfolio investment fund manager; Legatum Ventures a double bottom line
Double bottom line
Double bottom line is a business term used in socially responsible enterprise and investment.While all businesses have a conventional bottom line to measure their fiscal performance—financial profit or loss—enterprises which seek a second bottom line look to measure their performance in...
investment fund, the Legatum Foundation, a philanthropic organisation; and the Legatum Center for Development And Entrepreneurship at Massachusetts Institute of Technology, a collaboration with MIT that funds graduate student entrepreneurs from developing markets.

One of the main authors of the 2007 report, Will Inboden, was a senior white-house official in the administration of George W. Bush
George W. Bush
George Walker Bush is an American politician who served as the 43rd President of the United States, from 2001 to 2009. Before that, he was the 46th Governor of Texas, having served from 1995 to 2000....
. Ryan Streeter
Ryan Streeter
Ryan Streeter is currently Editor of ConservativeHomeUSA, the U.S. edition of the British political site of the same name. He is also a Nonresident Transatlantic Fellow of the German Marshall Fund, a Distinguished Visiting Fellow at the Sagamore Institute, a Nonresident Scholar at the Institute...
, a senior fellow at the institute, was the director of HUD's Center for Faith Based and Community Initiatives in the same administration.