Encyclopedia
Mayfair is an area of central London
Central London
Central London is the innermost part of London, England. There is no official or commonly accepted definition of its area, but its characteristics are understood to include a high density built environment, high land values, an elevated daytime population and a concentration of regionally,...
, within the City of Westminster
City of Westminster
The City of Westminster is a London borough occupying much of the central area of London, England, including most of the West End. It is located to the west of and adjoining the ancient City of London, directly to the east of the Royal Borough of Kensington and Chelsea, and its southern boundary...
. 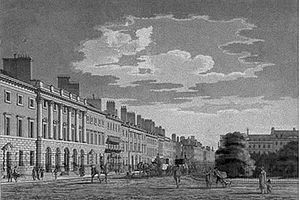 Mayfair is named after the annual fortnight
Fortnight
The fortnight is a unit of time equal to fourteen days, or two weeks. The word derives from the Old English fēowertyne niht, meaning "fourteen nights"....
-long May Fair that took place on the site that is Shepherd Market
Shepherd Market
Shepherd Market is a small square in the Mayfair area of central London, England. It is located between Piccadilly and Curzon Street and has a village-like atmosphere.- History :...
today (from 1686 until it was banned in that location in 1764). Until 1686, the May Fair was held in Haymarket, and after 1764, it moved to Fair Field in Bow
Bow, London
Bow is an area of London, England, United Kingdom in the London Borough of Tower Hamlets. It is a built-up, mostly residential district located east of Charing Cross, and is a part of the East End.-Bridges at Bowe:...
because the well-to-do residents of the area felt the fair lowered the tone of the neighbourhood.

Mayfair was traditionally bordered by Hyde Park to the west, Oxford Street to the north, Piccadilly to the south and Bond Street to the east, although the eastern boundary has been stretched in recent years to Regent Street. The old telephone district of MAYfair (later 629) changed east of Bond Street to REGent (later 734). Most of the area was first developed between the mid 17th century and the mid 18th century as a fashionable residential district, by a number of landlords, the most important of them being the Dukes of Westminster, the Grosvenor family. The Rothschild family
Rothschild family
The Rothschild family , known as The House of Rothschild, or more simply as the Rothschilds, is a Jewish-German family that established European banking and finance houses starting in the late 18th century...
bought up large areas of Mayfair in the 19th century. The freehold
Fee simple
In English law, a fee simple is an estate in land, a form of freehold ownership. It is the most common way that real estate is owned in common law countries, and is ordinarily the most complete ownership interest that can be had in real property short of allodial title, which is often reserved...
of a large section of Mayfair also belongs to the Crown Estate
Crown Estate
In the United Kingdom, the Crown Estate is a property portfolio owned by the Crown. Although still belonging to the monarch and inherent with the accession of the throne, it is no longer the private property of the reigning monarch and cannot be sold by him/her, nor do the revenues from it belong...
.

The district is now mainly commercial, with many offices in converted houses and new buildings, including major corporate headquarters, a concentration of hedge funds, real estate businesses and many different embassy offices, namely the U.S.'s large office taking up all the west side of Grosvenor Square. Rents are among the highest in London and the world. There remains a substantial quantity of residential property as well as some exclusive shopping and London's largest concentration of luxury hotels
Hotels in London
This article describes the hotels in London, England. Hotels are an important part of London's tourism industry.-History:Before the 19th century there were few if any large hotels in London. British country landowners often lived in London for part of the year but they usually rented a house, if...
and many restaurants. Buildings in Mayfair include both the Canadian High Commission and the United States
United States
The United States of America is a federal constitutional republic comprising fifty states and a federal district...
embassy in Grosvenor Square
Grosvenor Square
Grosvenor Square is a large garden square in the exclusive Mayfair district of London, England. It is the centrepiece of the Mayfair property of the Duke of Westminster, and takes its name from their surname, "Grosvenor".-History:...
, the Royal Academy of Arts, The Handel House Museum
Handel House Museum
The Handel House Museum is a museum in Mayfair, London dedicated to the life and works of the German born baroque composer George Frideric Handel, who made his home in London in 1712 and eventually became a British citizen in 1727. Handel was the first occupant of 25 Brook Street, which he rented...
, the Grosvenor House Hotel
Grosvenor House Hotel
Grosvenor House is a large and luxurious hotel. The iconic Mayfair, London hotel is owned by the Sahara Group. The name has also been licensed to a property in Dubai....
, Claridge's
Claridge's
Claridge's is a luxury hotel in Mayfair, central London. It is located at the corner of Brook Street and Davies Street.-History:Claridge's is a traditional grand hotel. Its extensive and old connections with royalty have led to it being referred to as an "extension to Buckingham Palace"...
and The Dorchester.

The renown and prestige of Mayfair could have grown in the popular mind because it is the most expensive property on the British
United Kingdom
The United Kingdom of Great Britain and Northern IrelandIn the United Kingdom and Dependencies, other languages have been officially recognised as legitimate autochthonous languages under the European Charter for Regional or Minority Languages...
Monopoly
Monopoly (game)
Marvin Gardens, the leading yellow property on the board shown, is actually a misspelling of the original location name, Marven Gardens. The misspelling was said to be introduced by Charles Todd and passed on when his home-made Monopoly board was copied by Charles Darrow and thence to Parker...
set.

Mayfair has become an attractive location away from the City of London for private banks, hedge funds and wealth managers.
The Egyptian Education Bureau, is located in Chesterfield Gardens. EasyGroup
EasyGroup
EasyGroup , founded in 1998, is a conglomerate & the holding company controlling the "easy" ventures; it is privately owned by Stelios Haji-Ioannou....
has its head office in Mayfair.

The City of Westminster operates the Mayfair Library as a local library.