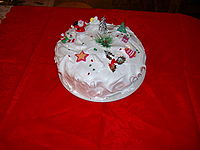 A layer cake is a cake
Cake
Cake is a form of bread or bread-like food. In its modern forms, it is typically a sweet and enriched baked dessert. In its oldest forms, cakes were normally fried breads or cheesecakes, and normally had a disk shape...
consisting of multiple layers, usually held together by frosting
Icing (food)
Icing, also called frosting in the United States, is a sweet often creamy glaze made of sugar with a liquid such as water or milk, that is often enriched with ingredients such as butter, egg whites, cream cheese, or flavorings and is used to cover or decorate baked goods, such as cakes or cookies...
or another type of filling, such as jam or other preserves. Most cake recipes can be made into layer cakes; butter cake
Butter cake
A butter cake is a cake in which one of the main ingredients is butter. Butter cakes consist of taking the most basic of ingredients butter, sugar, eggs, flour, and a leavening agent and transforming them into a baked good....
s and sponge cake
Sponge cake
Sponge cake is a cake based on flour , sugar, and eggs, sometimes leavened with baking powder which has a firm, yet well aerated structure, similar to a sea sponge. A sponge cake may be produced by either the batter method, or the foam method. Typicially the batter method in the U.S. is known as a...
s are common choices. Frequently, the cake is covered with icing
Cake decorating
Cake decorating is one of the sugar arts that uses icing or frosting and other edible decorative elements to make otherwise plain cakes more visually interesting...
, but sometimes, the sides are left undecorated, so that the filling and the number of layers are visible.

Popular flavor combinations include the German chocolate cake
German chocolate cake
In US German chocolate cake, originally known as German's chocolate cake, is a layered chocolate cake filled and topped with a coconut-pecan frosting. It owes its name to American Sam German, who developed a brand of dark baking chocolate used for the cake. Sweet baking chocolate is traditionally...
, red velvet cake
Red velvet cake
A red velvet cake is a cake with a dark red, bright red or red-brown color. It is usually prepared as a layer cake with either a vanilla, or chocolate flavor, topped with a creamy white icing or a cookie dough filling...
, Black Forest cake, and carrot cake
Carrot cake
Carrot cake is a cake which consists of grated carrots mixed with batter. The carrot softens in the cooking process, and the cake usually has a soft, dense texture...
with cream cheese
Cream cheese
Cream cheese is a soft, mild-tasting, white cheese with a high fat content. Traditionally, it is made from unskimmed milk enriched with additional cream....
icing. Many wedding cakes are decorated layer cakes.

In the mid-19th century, modern cakes were first described in English. One of the first recipes for layer cakes was published in Cassell's New Universal Cookery Book, published in London in 1894.

An older form of layer cake is common in southern and eastern Europe. In Ukraine and Russia, people still make these cakes in the old traditional way. The cake batter is baked in a frying pan in thin layers, about a centimeter thick in the finished stack. These layers are then covered with a thin layer of cream and/or jam and stacked 7 or 8 layers high. This stack, which is the same height as the typical Western layer cake, is then frosted so that the structure is not visible. At first glance, these cakes look much like a German konditorei
Konditorei
Konditorei is the German word for a pâtisserie and confectionery shop. A Konditorei typically offers a wide variety of pastries and is like a little café. In Germany and Austria it is a very popular custom to go to a Konditorei to have a cake and some coffee or hot chocolate mid-afternoon...
style cake such as the Black Forest cake.

Layer cakes always serve multiple people, so they are larger than cupcake
Cupcake
A cupcake is a small cake designed to serve one person, frequently baked in a small, thin paper or aluminum cup...
s, petit fours, or other individual pastries. A common layer cake size, which is baked in nine-inch round cake pans, typically serves about 16 people.

Unlike the Vietnamese Bánh da lợn or Swiss roll
Swiss roll
A Swiss roll or jelly roll is a type of sponge cake roll. The thin cake is made of eggs, flour and sugar and baked in a very shallow rectangular baking tray, called a sheet pan. The cake is removed from the pan and spread with jam or buttercream, rolled up, and served in circular slices.The...
s, layer cake is assembled from several separate pieces of cake. A sheet cake
Sheet cake
A sheet cake is a cake baked in a large, flat rectangular pan such as a sheet pan or a jelly roll pan. These single-layer cakes are almost always frosted, and may be decorated on the flat surface on the top...
can become a layer cake if it is cut into pieces and reassembled with frosting or other filling to form layers.
The source of this article is wikipedia, the free encyclopedia.  The text of this article is licensed under the GFDL.