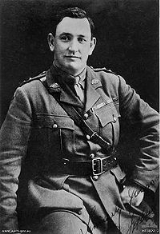 Private
Private (rank)
A Private is a soldier of the lowest military rank .In modern military parlance, 'Private' is shortened to 'Pte' in the United Kingdom and other Commonwealth countries and to 'Pvt.' in the United States.Notably both Sir Fitzroy MacLean and Enoch Powell are examples of, rare, rapid career...
McCarthy was posted to the 16th Battalion
Battalion
A battalion is a military unit of around 300–1,200 soldiers usually consisting of between two and seven companies and typically commanded by either a Lieutenant Colonel or a Colonel...
where his large build earned him the nickname "Fats". The battalion landed at Gallipoli
Gallipoli
The Gallipoli peninsula is located in Turkish Thrace , the European part of Turkey, with the Aegean Sea to the west and the Dardanelles straits to the east. Gallipoli derives its name from the Greek "Καλλίπολις" , meaning "Beautiful City"...
on 26 April 1915 and McCarthy remained on the peninsula until illness forced his evacuation in September. By then he had been promoted to sergeant
Sergeant
Sergeant is a rank used in some form by most militaries, police forces, and other uniformed organizations around the world. Its origins are the Latin serviens, "one who serves", through the French term Sergent....
. He returned to duty in November and was among the last in his battalion to leave Gallipoli on 20 December.

By June 1916 the 16th Battalion were in France
France
The French Republic , The French Republic , The French Republic , (commonly known as France , is a unitary semi-presidential republic in Western Europe with several overseas territories and islands located on other continents and in the Indian, Pacific, and Atlantic oceans. Metropolitan France...
where they took part in the fighting at Pozières
Pozières
Pozières is a commune in the Somme department in Picardie in northern France.-Geography:The commune is situated on the D929 road, some northeast of Amiens between Albert and Bapaume, on the Pozières ridge.-Population:-History:...
and Mouquet Farm in August. McCarthy was promoted to company sergeant major
Company Sergeant Major
A company sergeant major is the senior non-commissioned soldier of a company in the armies of many Commonwealth countries, responsible for standards and discipline. In combat, his prime responsibility is the supply of ammunition to the company...
in March 1917 and the following month was commissioned as a second lieutenant
Second Lieutenant
Second lieutenant is a junior commissioned officer military rank in many armed forces.- United Kingdom and Commonwealth :The rank second lieutenant was introduced throughout the British Army in 1871 to replace the rank of ensign , although it had long been used in the Royal Artillery, Royal...
. The day after receiving his commission, McCarthy was wounded at Bullecourt
Bullecourt
Bullecourt is a commune in the Pas-de-Calais department in the Nord-Pas-de-Calais region in France.-Geography:Bullecourt lies on the Upper Cretaceous plain of Artois between Arras and Bapaume and east of the A1 motorway. This shows Bullecourt just north of centre. Quéant is the larger of the two...
and evacuated to England
England
England is a country that is part of the United Kingdom. It shares land borders with Scotland to the north and Wales to the west; the Irish Sea is to the north west, the Celtic Sea to the south west, with the North Sea to the east and the English Channel to the south separating it from continental...
where he spent three months in hospital and convalescing. In November he was promoted to lieutenant
Lieutenant
A lieutenant is a junior commissioned officer in many nations' armed forces. Typically, the rank of lieutenant in naval usage, while still a junior officer rank, is senior to the army rank...
and was awarded the French Croix de Guerre
Croix de guerre
The Croix de guerre is a military decoration of France. It was first created in 1915 and consists of a square-cross medal on two crossed swords, hanging from a ribbon with various degree pins. The decoration was awarded during World War I, again in World War II, and in other conflicts...
. He spent the months between February and August 1918 training troops in England, before rejoining his battalion in time for the offensive that began on 8 August.

Just over two weeks later, on 23 August 1918, McCarthy performed what some regarded as the most effective piece of individual fighting in the history of the AIF next to Albert Jacka
Albert Jacka
Albert Jacka VC, MC & Bar was an Australian recipient of the Victoria Cross, the highest decoration for gallantry "in the face of the enemy" that can be awarded to members of the British and Commonwealth armed forces...
's Military Cross
Military Cross
The Military Cross is the third-level military decoration awarded to officers and other ranks of the British Armed Forces; and formerly also to officers of other Commonwealth countries....
winning feat at Pozières. Near Madam Wood, east of Vermandovillers
Vermandovillers
Vermandovillers is a commune in the Somme department in Picardie in northern France.-Geography:Vermandovillers is situated east of Amiens, on the D143 and D79 roads.-World War I – Battles at Vermandovillers:...
, France
France
The French Republic , The French Republic , The French Republic , (commonly known as France , is a unitary semi-presidential republic in Western Europe with several overseas territories and islands located on other continents and in the Indian, Pacific, and Atlantic oceans. Metropolitan France...
, the battalion was heavily opposed by well-posted machine-guns. Lieutenant McCarthy, realizing the situation, dashed across the open ground with two men to the nearest post, where, having out-distanced his companions, he put the gun out of action, then continued fighting his way down the trench. Later, having been joined by one of his men, together they bombed their way along the trench until contact was established with an adjoining unit. During this action Lieutenant McCarthy had killed 22 of the enemy, taken 50 prisoners and captured 5 machine-guns. 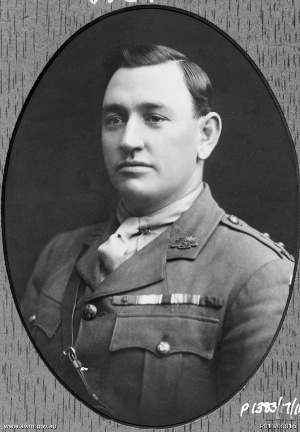 For this McCarthy was awarded the Victoria Cross that, within his battalion and in some quarters of the London press, came to be known as the "super-VC".

Ten days after the war ended, on 21 November 1918, McCarthy was evacuated to England with influenza
Influenza
Influenza, commonly referred to as the flu, is an infectious disease caused by RNA viruses of the family Orthomyxoviridae , that affects birds and mammals...
. He returned to Australia
Australia
Australia , officially the Commonwealth of Australia, is a country in the Southern Hemisphere comprising the mainland of the Australian continent, the island of Tasmania, and numerous smaller islands in the Indian and Pacific Oceans. It is the world's sixth-largest country by total area...
in December 1919, having married Florence Norville the previous January. Their only son, Lawrence, was killed in action on Bougainville
Bougainville Island
Bougainville Island is the main island of the Autonomous Region of Bougainville of Papua New Guinea. This region is also known as Bougainville Province or the North Solomons. The population of the province is 175,160 , which includes the adjacent island of Buka and assorted outlying islands...
in 1945. McCarthy was demobilised in August 1920. He returned to Western Australia but moved to Victoria in 1926. He gained employment with the Sunshine Harvester Works remaining with them until 1934 when the company was forced to lay off staff during the Great Depression
Great Depression
The Great Depression was a severe worldwide economic depression in the decade preceding World War II. The timing of the Great Depression varied across nations, but in most countries it started in about 1929 and lasted until the late 1930s or early 1940s...
. He found new work the following year with the Trustees, Executors & Agency Co., and remained with that company until his retirement in 1969.