Encyclopedia
Lauca National Park is located in Chile's far north
Norte Grande, Chile
The Norte Grande is one of the five natural regions into which CORFO divided continental Chile in 1950. It borders Peru to the north, the Pacific Ocean to the west, the Altiplano, Bolivia and Argentina to the east, and the Copiapó River to the south, beyond which lies the Norte Chico natural...
, in the Andean range. It encompasses an area of 1,379 km² of altiplano
Altiplano
The Altiplano , in west-central South America, where the Andes are at their widest, is the most extensive area of high plateau on Earth outside of Tibet...
and mountains, the latter consisting mainly of enormous volcanoes. Las Vicuñas National Reserve
Las Vicuñas National Reserve
Las Vicuñas National Reserve is a nature reserve located in the Parinacota Province, Arica and Parinacota Region, Chile. The reserve lies immediately south of Lauca National Park and in its southern portion is contiguous to Salar de Surire Natural Monument, all of which form Lauca Biosphere Reserve...
is its neighbour to the south. Both protected areas, along with Salar de Surire Natural Monument
Salar de Surire Natural Monument
Salar de Surire Natural Monument is a Chilean Natural Monument located in the Andes, in the Arica and Parinacota Region. It consists mainly of a salt flat and a number of small salt lakes, sheltering several Andean species of wildlife and plants...
, form Lauca Biosphere Reserve
Lauca
Lauca is a Biosphere Reserve, located in northern Chile, in Arica and Parinacota Region. The reserve comprises three protected areas: Lauca National Park, Las Vicuñas National Reserve and Salar de Surire Natural Monument. This zone was declared a Biosphere Reserve by UNESCO in 1981.-References and...
. The park borders Sajama National Park
Sajama National Park
Sajama National Park is a national park located in the Oruro Department, Bolivia. It borders Lauca National Park in Chile.The park lies within the Central Andean dry puna ecoregion.. It features a spectacular Andean landscape, with elevations ranging from . It contains the snowy cone of Nevado...
in Bolivia
Bolivia
Bolivia officially known as Plurinational State of Bolivia , is a landlocked country in central South America. It is the poorest country in South America...
.

One of the main attractions of the park is the small lacustrine area formed by Chungará and Cotacotani
Laguna de Cotacotani
Laguna de Cotacotani is a lake located in the Andean altiplano of the Parinacota Province, Arica-Parinacota Region, Chile. It lies 4 km northwest of Chungará Lake, which is one of the highest lakes in the world and is surrounded by several volcanoes, such as the group formed by the Nevados de...
lakes, which lies at the foothills of the Nevados de Payachata
Nevados de Payachata
Nevados de Payachata is a north-south trending complex of potentially active volcanos on the border of Bolivia and Chile, directly north of Chungará Lake. The complex contains two peaks, Pomerape to the north and Parinacota to the south. According to helium surface dating, Parinacota has erupted...
. Other majestic volcanoes forming part of the national park are the Guallatiri
Guallatiri
Guallatiri is one of the most active volcanoes in northern Chile. It is just west of the border with Bolivia and at the southwestern end of the Nevados de Quimsachata. It is a symmetrical 6,071 m high ice-clad stratovolcano...
and the Acotango
Acotango
Volcán Acotango - is the central and highest of a group of stratovolcanoes straddling the border of Bolivia and Chile. The group is known as Nevados de Quimsachata and consists, apart of Acotango, of Volcán Humarata - to its north and Cerro Capurata - on its south.The group lies along a...
. Lauca features include archaeological sites, lava fields and volcanic calderas. Within the park is located the town of Parinacota
Parinacota, Chile
Parinacota is a small Chilean hamlet in Putre, Parinacota Province, Arica and Parinacota Region.-Location:It is situated on the highlands at a height of 4,400 m in Lauca National Park near the small town of Putre and had 29 inhabitants as of 2002.-Church:The church was built in the 17th century in...
with its colonial church.

The headwaters of Lauca River
Lauca River
The Lauca River is a binational river. It originates from Chilean Altiplano of the Tarapacá Region, crosses the Andes and empties into Coipasa Lake, in Bolivia....
are also found within the park and bordering it to the west is Lluta River
Lluta River
The Lluta River is a river located in the northern part of the Arica and Parinacota Region of Chile. Its headwaters are on the western flanks of the Andes of the Parinacota Province, just a few kilometers south of the border with Peru, and empties into Pacific Ocean about 4 km north of the city of...
.

The international Route CH-11 passes through this protected area. It runs from the Pan-American Highway
Pan-American Highway
The Pan-American Highway is a network of roads measuring about in total length. Except for an rainforest break, called the Darién Gap, the road links the mainland nations of the Americas in a connected highway system. According to Guinness World Records, the Pan-American Highway is the world's...
in the vicinity of Arica
Arica, Chile
Arica is a commune and a port city with a population of 185,269 in the Arica Province of northern Chile's Arica and Parinacota Region, located only south of the border with Peru. The city is the capital of both the Arica Province and the Arica and Parinacota Region...
to Tambo Quemado Pass
Chungara–Tambo Quemado
Chungara–Tambo Quemado is a mountain pass through the Cordillera Occidental of the Andes along the border between Chile and Bolivia. Chungara–Tambo Quemado is one of the principal Chile-Bolivia passes in the central Andes as it connects La Paz with its nearest seaport Arica....
and provides the main access to the park.

Several species of animals and plants can be found in the park. Mammals in the area include Vicuña
Vicuña
The vicuña or vicugna is one of two wild South American camelids, along with the guanaco, which live in the high alpine areas of the Andes. It is a relative of the llama, and is now believed to share a wild ancestor with domesticated alpacas, which are raised for their fibre...
s, Llama
Llama
The llama is a South American camelid, widely used as a meat and pack animal by Andean cultures since pre-Hispanic times....
s, Alpaca
Alpaca
An alpaca is a domesticated species of South American camelid. It resembles a small llama in appearance.Alpacas are kept in herds that graze on the level heights of the Andes of southern Peru, northern Bolivia, Ecuador, and northern Chile at an altitude of to above sea level, throughout the year...
s, Guanacos, Taruca
Taruca
The Taruca , or North Andean Deer, is a species of deer that ranges across the Andes of Peru and Bolivia and the north of Chile and the northwest of Argentina...
s, Cougars and Vizcachas.

There are over 140 bird species, making it one of the best national parks for birding in Chile. Those include Puna Ibis
Puna Ibis
The Puna Ibis is a species of bird in the Threskiornithidae family. It is found in Argentina, Bolivia, Chile, and Peru. Its natural habitat is swamps.-References:* BirdLife International 2004. . Downloaded on 24 July 2007....
, Andean Goose
Andean Goose
The Andean Goose, Chloephaga melanoptera, is a member of the duck, goose and swan family Anatidae. It is in the shelduck subfamily Tadorninae.It is resident around lakes and marshes in the high Andes, usually well above 3000 m...
, Giant Coot
Giant Coot
The Giant Coot is a species of bird found at lakes in the altiplano from central Peru, through western Bolivia, to north-eastern Chile and extreme north-western Argentina. With a total length of 48–64 cm , it is the second largest extant member of the Rallidae family, after the Takahe, and...
, Puna Tinamou
Puna Tinamou
The Puna Tinamou, Tinamotis pentlandii also known as Pentland’s Tinamou is a member of the most ancient groups of bird families, the tinamous. This species is native to southern South America.-Taxonomy:...
, Silvery Grebe
Silvery Grebe
The Silvery Grebe is a species of grebe in the Podicipedidae family.It is found in Argentina, Chile, the Falkland Islands and Paraguay as well as Andean regions of Bolivia, Colombia, Ecuador and Peru. It is a vagrant to Brazil....
, Crested Duck
Crested Duck
The Crested Duck is a species of duck native to South America, the only member of the monotypic genus Lophonetta. It is sometimes included in Anas, but it belongs to a South American clade that diverged early in dabbling duck evolution . There are two subspecies: L...
, Puna Teal
Puna Teal
The Puna Teal is a species of dabbling duck in the genus Anas. It was previously regarded as a subspecies of the Silver Teal....
, Andean Condor
Andean Condor
The Andean Condor is a species of South American bird in the New World vulture family Cathartidae and is the only member of the genus Vultur...
and Chilean Flamingo
Chilean Flamingo
The Chilean Flamingo is a large species closely related to Caribbean Flamingo and Greater Flamingo, with which it was sometimes considered conspecific...
.

Over 400 species of vascular plant
Vascular plant
Vascular plants are those plants that have lignified tissues for conducting water, minerals, and photosynthetic products through the plant. Vascular plants include the clubmosses, Equisetum, ferns, gymnosperms and angiosperms...
s grow in Lauca National Park. The park's vegetation is adapted to the harsh puna environment, as are the bofedales, llaretales
Yareta
Yareta is a tiny flowering plant in the family Apiaceae native to South America, occurring in the Puna grasslands of the Andes in Peru, Bolivia, the north of Chile and the west of Argentina at between 3200 and 4500 metres altitude.Yareta is an evergreen perennial being in leaf...
and Andean steppes. 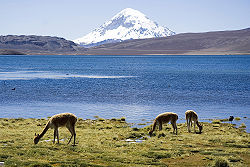