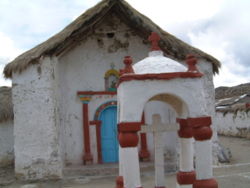 It is situated on the highlands at a height of 4,400 m in Lauca National Park
Lauca National Park
Lauca National Park is located in Chile's far north, in the Andean range. It encompasses an area of 1,379 km² of altiplano and mountains, the latter consisting mainly of enormous volcanoes. Las Vicuñas National Reserve is its neighbour to the south. Both protected areas, along with Salar de Surire...
near the small town of Putre
Putre
Putre is a Chilean town and commune, capital of the Parinacota Province in the Arica-Parinacota Region. It is located east of Arica, at an altitude of...
and had 29 inhabitants as of 2002.

The church was built in the 17th century in the form of a central nave with two side chapels. The walls are made of stone and clay and are supported by exterior arches of stones without mortar. The floor is made of bricks with a central band of stones. Originally there was no choir. A choir without railing was built later on whereas one of the most interesting frescoes of the area, the "Last Judgment" was destroyed. The atrium is surrounded by a clay wall on which are situated several figures made of red stone: A bishop, lilies, phalli and others. The square tower was rebuilt in 1789 and painted with white lime.

Noteworthy are the frescoes in the interior which were painted in water colors by Indians in the Andean baroque of the 17th century. The "Last Judgment" suggests that only women were condemned. The archangel St. Michael weighs a nude woman on a scale and there are trails to get to the purgatory, over clouds to heaven as well as stairs to the mouth of a dragon which leads to hell, where there are several torture instruments. The condemned women walk or are dragged by the hair or are ridden by demons. One of them leads the helpers of evil with a broad smile, not knowing what is expecting her.
The source of this article is wikipedia, the free encyclopedia.  The text of this article is licensed under the GFDL.