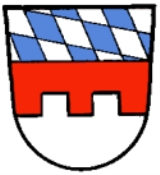 The city of Landshut was founded in 1204 by the ruling Wittelsbach
Wittelsbach
The Wittelsbach family is a European royal family and a German dynasty from Bavaria.Members of the family served as Dukes, Electors and Kings of Bavaria , Counts Palatine of the Rhine , Margraves of Brandenburg , Counts of Holland, Hainaut and Zeeland , Elector-Archbishops of Cologne , Dukes of...
family of Bavaria. Since then the region has always been a part of Bavaria.

Many residents work at the Dingolfing
Dingolfing
Dingolfing is a town in Southern Bavaria, Germany. It is the seat of the Landkreis Dingolfing-Landau.- History :The area now called Dingolfing was first mentioned in Tinguluinga in the year 833....
BMW
BMW
Bayerische Motoren Werke AG is a German automobile, motorcycle and engine manufacturing company founded in 1916. It also owns and produces the Mini marque, and is the parent company of Rolls-Royce Motor Cars. BMW produces motorcycles under BMW Motorrad and Husqvarna brands...
(formerly Glas
Glas
Hans Glas GmbH is a former German automotive company, which was based in Dingolfing. Originally a maker of farm machinery, Glas evolved first into a producer of motor scooters, then automobiles...
) car plant which expanded massively during the 1970s. Others commute daily to Munich
Munich
Munich The city's motto is "" . Before 2006, it was "Weltstadt mit Herz" . Its native name, , is derived from the Old High German Munichen, meaning "by the monks' place". The city's name derives from the monks of the Benedictine order who founded the city; hence the monk depicted on the city's coat...
, which is about 46 miles (74km) to the southwest.