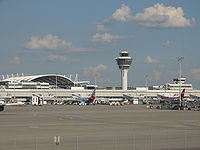 This is a controversial charge
Charge (heraldry)
In heraldry, a charge is any emblem or device occupying the field of an escutcheon . This may be a geometric design or a symbolic representation of a person, animal, plant, object or other device...
in the Coat of Arms
Coat of arms
A coat of arms is a unique heraldic design on a shield or escutcheon or on a surcoat or tabard used to cover and protect armour and to identify the wearer. Thus the term is often stated as "coat-armour", because it was anciently displayed on the front of a coat of cloth...
, which could represent one of many different persons:


It is important to note the crown on the moor's head
Maure
A Maure, since the 11th century, is the symbol of an African head. The term has Phoenician and Greek origins; see Moors.- U Moru :The main symbol in the coat of arms in Corsica is U Moru, Corsican for "The Moor", originally a female Moor blindfolded and wearing a necklace made of beads...
, which probably indicated that the territory of the Bishop of Freising was autonomous.