Encyclopedia
Land-use planning is the term used for a branch of public policy
Public policy
Public policy as government action is generally the principled guide to action taken by the administrative or executive branches of the state with regard to a class of issues in a manner consistent with law and institutional customs. In general, the foundation is the pertinent national and...
encompassing various disciplines which seek to order and regulate land use
Land use
Land use is the human use of land. Land use involves the management and modification of natural environment or wilderness into built environment such as fields, pastures, and settlements. It has also been defined as "the arrangements, activities and inputs people undertake in a certain land cover...
in an efficient and ethical way, thus preventing land-use conflicts. Governments use land-use planning to manage the development of land within their jurisdictions. In doing so, the governmental unit can plan for the needs of the community while safeguarding natural resources. To this end, it is the systematic assessment of land and water potential, alternatives for land use, and economic and social conditions in order to select and adopt the best land-use options. Often one element of a comprehensive plan, a land-use plan provides a vision for the future possibilities of development in neighborhoods, districts, cities, or any defined planning area.

In the United States, the terms land-use planning, regional planning
Regional planning
Regional planning deals with the efficient placement of land use activities, infrastructure, and settlement growth across a larger area of land than an individual city or town. The related field of urban planning deals with the specific issues of city planning...
, urban planning
Urban planning
Urban planning incorporates areas such as economics, design, ecology, sociology, geography, law, political science, and statistics to guide and ensure the orderly development of settlements and communities....
, and urban design
Urban design
Urban design concerns the arrangement, appearance and functionality of towns and cities, and in particular the shaping and uses of urban public space. It has traditionally been regarded as a disciplinary subset of urban planning, landscape architecture, or architecture and in more recent times has...
are often used interchangeably, and will depend on the state, county, and/or project in question. Despite confusing nomenclature, the essential function of land-use planning remains the same whatever term is applied. The Canadian Institute of Planners
Canadian Institute of Planners
The Canadian Institute of Planners is a professional organization in Canada for those involved in land use planning.Founded in 1919, its primary aim is "the advancement of responsible planning throughout Canada"....
offers a definition that land-use planning means the scientific, aesthetic, and orderly disposition of land, resources, facilities and services with a view to securing the physical, economic and social efficiency, health and well-being of urban and rural communities. The American Planning Association states that the goal of land-use planning is to further the welfare of people and their communities by creating convenient, equitable, healthful, efficient, and attractive environments for present and future generations.

Land-use planning often leads to land-use regulations, also known as zoning
Zoning
Zoning is a device of land use planning used by local governments in most developed countries. The word is derived from the practice of designating permitted uses of land based on mapped zones which separate one set of land uses from another...
, but they are not one and the same. As a tool for implementing land-use plans, zoning regulates the types of activities that can be accommodated on a given piece of land, the amount of space devoted to those activities and the ways that buildings may be placed and shaped.

The ambiguous nature of the term “planning”, as it relates to land use, is historically tied to the practice of zoning. Zoning in the US came about in the late 19th and early 20th centuries to protect the interests of property owners. The practice was found to be constitutionally sound by the Supreme Court decision of Village of Euclid v. Ambler Realty Co. in 1926. Soon after, the Standard State Zoning Enabling Act gave authority to the states to regulate land use. Even so, the practice remains controversial today.

The “taking clause” of the Fifth Amendment to the United States Constitution
Fifth Amendment to the United States Constitution
The Fifth Amendment to the United States Constitution, which is part of the Bill of Rights, protects against abuse of government authority in a legal procedure. Its guarantees stem from English common law which traces back to the Magna Carta in 1215...
prohibits the government from taking private property for public use without just compensation. One interpretation of the taking clause is that any restriction on the development potential of land through zoning regulation is a “taking”. A deep-rooted anti-zoning sentiment exists in America, that no one has the right to tell another what he can or cannot do with his land. Ironically, although people are often averse to being told how to develop their own land, they tend to expect the government to intervene when a proposed land use is undesirable.

Conventional zoning has not typically regarded the manner in which buildings relate to one another or the public spaces around them, but rather has provided a pragmatic system for mapping jurisdictions according to permitted land use. This system, combined with the interstate highway system
Interstate Highway System
The Dwight D. Eisenhower National System of Interstate and Defense Highways, , is a network of limited-access roads including freeways, highways, and expressways forming part of the National Highway System of the United States of America...
, widespread availability of mortgage loans, growth in the automobile industry, and the over-all post-World War II economic expansion
Post-World War II economic expansion
The post–World War II economic expansion, also known as the postwar economic boom, the long boom, and the Golden Age of Capitalism, was a period of economic prosperity in the mid 20th century, which occurred mainly in western countries, followed the end of World War II in 1945, and lasted until the...
, destroyed most of the character that gave distinctiveness to American cities. The urban sprawl
Urban sprawl
Urban sprawl, also known as suburban sprawl, is a multifaceted concept, which includes the spreading outwards of a city and its suburbs to its outskirts to low-density and auto-dependent development on rural land, high segregation of uses Urban sprawl, also known as suburban sprawl, is a...
that most US cities began to experience in the mid-twentieth century was, in part, created by a flat approach to land-use regulations. Zoning without planning created unnecessarily exclusive zones. Thoughtless mapping of these zones over large areas was a big part of the recipe for suburban sprawl. It was from the deficiencies of this practice that land-use planning developed, to envision the changes that development would cause and mitigate the negative effects of such change.

As America grew and sprawl was rampant, the much-loved America of the older towns, cities, or streetcar suburbs essentially became illegal through zoning. Unparalleled growth and unregulated development changed the look and feel of landscapes and communities. They strained commercial corridors and affected housing prices, causing citizens to fear a decline in the social, economic and environmental attributes that defined their quality of life. Zoning regulations became politically contentious as developers, legislators, and citizens struggled over altering zoning maps in a way that was acceptable to all parties. Land use planning practices evolved as an attempt to overcome these challenges. It engages citizens and policy-makers to plan for development with more intention, foresight, and community focus than had been previously used.

Various types of planning have emerged over the course of the 20th century. Below are the six main typologies of planning, as defined by David Walters in his book Designing Communities.

Systems planning: 1950s–1970s, resulting from the failure of comprehensive planning to deal with the unforeseen growth of post WWII America. More analytical view of the planning area as a set of complex processes, less interested in a physical plan.

Democratic planning: 1960s. Result of societal loosening of class and race barriers. Gave more citizens a voice in planning for future of community.

Environmental planning: 1960s-present. Developed as many of the ecological and social implications of global development were first widely understood.

Today, successful planning involves a balanced mix of analysis of the existing conditions and constraints; extensive public engagement; practical planning and design; and financially and politically feasible strategies for implementation.

Current processes include a combination of strategic and environmental planning. It is becoming more widely understood that any sector of land has a certain capacity for supporting human, animal, and vegetative life in harmony, and that upsetting this balance has dire consequences on the environment. Planners and citizens often take on an advocacy role during the planning process in an attempt to influence public policy.Due to a host of political and economic factors, governments are slow to adopt land use policies that are congruent with scientific data supporting more environmentally sensitive regulations. 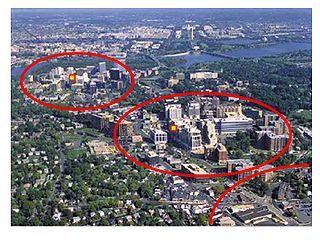 Smart growth supports the integration of mixed land uses into communities as a critical component of achieving better places to live. Putting uses in close proximity to one another has benefits for transportation alternatives to driving, security, community cohesiveness, local economies, and general quality of life issues. Smart growth strives to provide a means for communities to alter the planning context which currently renders mixed land uses illegal in most of the country.

Professional planners work in the public sector for governmental and non-profit agencies, and in the private sector for businesses related to land, community, and economic development. Through research, design, and analysis of data, a planner's work is to create a plan for some aspect of a community. This process typically involves gathering public input to develop the vision and goals for the community.

A charrette
Charrette
A charrette , is often Anglicized to charette and sometimes called a design charrette. It consists of an intense period of design activity.-Charrettes in general:...
is a facilitated planning workshop often used by professional planners to gather information from their clients and the public about the project at hand. Charettes involve a diverse set of stakeholders in the planning process, to ensure that the final plan comprehensively addresses the study area.

Geographic Information Systems, or GIS, is a very useful and important tool in land-use planning. It uses aerial photography to show land parcels, topography, street names, and other pertinent information. GIS systems contain layers of graphic information and their relational databases that may be projected into maps that allow the user to view a composite of a specific area, adding an array of graphically-oriented decision making tools to the planning process.

A transect
Transect
A transect is a path along which one records and counts occurrences of the phenomena of study .It requires an observer to move along a fixed path and to count occurrences along the path and, at the same time, obtain the distance of the object from the path...
, as used in planning, is a hierarchical scale of environmental zones that define a land area by its character, ranging from rural, preserved land to urban centers. As a planning methodology, the transect is used as a tool for managing growth and sustainability by planning land use around the physical character of the land. This allows a community to plan for growth while preserving the natural and historical nature of their environment.