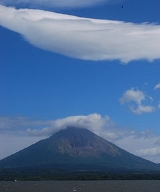 Encyclopedia
Lake Nicaragua or Cocibolca or Granada or is a vast freshwater
Freshwater
Fresh water is naturally occurring water on the Earth's surface in ice sheets, ice caps, glaciers, bogs, ponds, lakes, rivers and streams, and underground as groundwater in aquifers and underground streams. Fresh water is generally characterized by having low concentrations of dissolved salts and...
lake
Lake
A lake is a body of relatively still fresh or salt water of considerable size, localized in a basin, that is surrounded by land. Lakes are inland and not part of the ocean and therefore are distinct from lagoons, and are larger and deeper than ponds. Lakes can be contrasted with rivers or streams,...
in Nicaragua
Nicaragua
Nicaragua is the largest country in the Central American American isthmus, bordered by Honduras to the north and Costa Rica to the south. The country is situated between 11 and 14 degrees north of the Equator in the Northern Hemisphere, which places it entirely within the tropics. The Pacific Ocean...
of tectonic origin. With an area of 8264 km² (3,190.7 sq mi), it is the largest lake in Central America
Central America
Central America is the central geographic region of the Americas. It is the southernmost, isthmian portion of the North American continent, which connects with South America on the southeast. When considered part of the unified continental model, it is considered a subcontinent...
, the 19th largest lake in the world (by area) and the 9th largest in the Americas
Americas
The Americas, or America , are lands in the Western hemisphere, also known as the New World. In English, the plural form the Americas is often used to refer to the landmasses of North America and South America with their associated islands and regions, while the singular form America is primarily...
. It is slightly smaller than Lake Titicaca
Lake Titicaca
Lake Titicaca is a lake located on the border of Peru and Bolivia. It sits 3,811 m above sea level, making it the highest commercially navigable lake in the world...
. With an elevation of 32.7 metres (107.3 ft) above sea level, the lake reaches a depth of 26 metres (85.3 ft). It is intermittently joined by the Tipitapa River to Lake Managua
Lake Managua
Lake Managua is a lake in Nicaragua. The Spanish name is Lago de Managua or Lago Xolotlán. At 1,042 km², it is approximately long and wide. Similarly to the name of Lake Nicaragua, its name was coined by the Spanish conquerors from "Mangue" and agua...
.

Before construction of the Panama Canal, a stagecoach line owned by Cornelius Vanderbilt
Cornelius Vanderbilt
Cornelius Vanderbilt , also known by the sobriquet Commodore, was an American entrepreneur who built his wealth in shipping and railroads. He was also the patriarch of the Vanderbilt family and one of the richest Americans in history...
's Accessory Transit Company
Accessory Transit Company
The Accessory Transit Company was a company set up by Cornelius Vanderbilt and others during the California Gold Rush in the 1850s, to transport would-be prospectors from the east coast of the United States to the west coast....
connected the lake with the Pacific across the low hills of the narrow Isthmus of Rivas
Rivas
Rivas is a city and municipality in southwestern Nicaragua on the Isthmus of the same name. The city proper is the capital of the Department of Rivas and administrative centre for the surrounding municipality of the same name.-Overview:...
. Plans were made to take advantage of this route to build an interoceanic canal, the Nicaragua Canal
Nicaragua Canal
The Inter-Oceanic Nicaragua Canal was a proposed waterway through Nicaragua to connect the Caribbean Sea and Atlantic Ocean with the Pacific Ocean...
, but the Panama Canal
Panama Canal
The Panama Canal is a ship canal in Panama that joins the Atlantic Ocean and the Pacific Ocean and is a key conduit for international maritime trade. Built from 1904 to 1914, the canal has seen annual traffic rise from about 1,000 ships early on to 14,702 vessels measuring a total of 309.6...
was built instead. In order to quell competition with the Panama Canal, the U.S.
United States
The United States of America is a federal constitutional republic comprising fifty states and a federal district...
secured all rights to a canal along this route in the Bryan-Chamorro Treaty
Bryan-Chamorro Treaty
The Bryan-Chamorro Treaty was signed on August 5, 1914 under the approval of the Taft administration. The Wilson administration changed the treaty by adding a provision similar in language to that of the Platt Amendment, which would have authorized U.S. military intervention in Nicaragua...
of 1916. However, since this treaty was mutually rescinded by the United States and Nicaragua in 1970, the idea of another canal in Nicaragua still periodically resurfaces. Ecocanal
Ecocanal
The Nicaraguan Ecocanal is a project under construction in Nicaragua to build deepwater port facilities on the Atlantic Ocean coast, to link to the existing seaport of Corinto on the Pacific Ocean. They would be connected by a rail system to transport containerized and bulk cargo overland...
is one of these projects.

Lake Nicaragua, despite being a freshwater lake, has sawfish
Large-tooth sawfish
The large-tooth sawfish, Pristis perotteti, is a sawfish of the family Pristidae, found in tropical and subtropical parts of the Atlantic and east Pacific, but possibly now extirpated from most of the east Atlantic. As its relatives, it also enters freshwater, and there are records as far inland...
, tarpon
Atlantic tarpon
The Atlantic tarpon, Megalops atlanticus, inhabits coastal waters, estuaries, lagoons, and rivers. Tarpons feed almost exclusively on schooling fish and occasionally crabs. Tarpons are capable of filling their swim bladder with air, like a primitive lung. This gives Tarpons a predatory advantage...
, and shark
Shark
Sharks are a type of fish with a full cartilaginous skeleton and a highly streamlined body. The earliest known sharks date from more than 420 million years ago....
s. Initially, scientists thought the sharks in the lake belonged to an endemic species, the Lake Nicaragua Shark (Carcharhinus nicaraguensis). In 1961, following comparisons of specimen
Specimen
A specimen is a portion/quantity of material for use in testing, examination, or study.BiologyA laboratory specimen is an individual animal, part of an animal, a plant, part of a plant, or a microorganism, used as a representative to study the properties of the whole population of that species or...
s, the Lake Nicaragua Shark was synonymized
Synonym (taxonomy)
In scientific nomenclature, a synonym is a scientific name that is or was used for a taxon of organisms that also goes by a different scientific name. For example, Linnaeus was the first to give a scientific name to the Norway spruce, which he called Pinus abies...
with the widespread Bull shark
Bull shark
The bull shark, Carcharhinus leucas, also known as Zambezi shark or unofficially known as Zambi in Africa and Nicaragua shark in Nicaragua, is a shark common worldwide in warm, shallow waters along coasts and in rivers...
(C. leucas), a species also known for entering freshwater elsewhere around the world. It had been presumed that the sharks were trapped within the lake, but this was found to be incorrect in the late 1960s, when it was discovered that they were able to jump along the rapids of the San Juan River
San Juan River (Nicaragua)
The San Juan River , also known as El Desaguadero , is a 192.06 km river that flows east out of Lake Nicaragua into the Caribbean Sea. A large section of the border between Nicaragua and Costa Rica runs on the right bank of the river...
(which connects Lake Nicaragua and the Caribbean Sea
Caribbean Sea
The Caribbean Sea is a sea of the Atlantic Ocean located in the tropics of the Western hemisphere. It is bounded by Mexico and Central America to the west and southwest, to the north by the Greater Antilles, and to the east by the Lesser Antilles....
), almost like salmon
Salmon
Salmon is the common name for several species of fish in the family Salmonidae. Several other fish in the same family are called trout; the difference is often said to be that salmon migrate and trout are resident, but this distinction does not strictly hold true...
. As evidence of these movements, bull sharks tagged inside the lake have later been caught in the open ocean (and vice versa), with some taking as little as 7–11 days to complete the journey. Numerous other species of fish live in the lake, including at least 16 species of endemic cichlid
Cichlid
Cichlids are fishes from the family Cichlidae in the order Perciformes. Cichlids are members of a group known as the Labroidei along with the wrasses , damselfish , and surfperches . This family is both large and diverse. At least 1,300 species have been scientifically described, making it one of...
s. A non-native cichlid, a Tilapia
Tilapia
Tilapia , is the common name for nearly a hundred species of cichlid fish from the tilapiine cichlid tribe. Tilapia inhabit a variety of fresh water habitats, including shallow streams, ponds, rivers and lakes. Historically, they have been of major importance in artisan fishing in Africa and the...
, is used widely in aquaculture
Aquaculture
Aquaculture, also known as aquafarming, is the farming of aquatic organisms such as fish, crustaceans, molluscs and aquatic plants. Aquaculture involves cultivating freshwater and saltwater populations under controlled conditions, and can be contrasted with commercial fishing, which is the...
within the lake. Owing to the large amount of waste they produce, and the risk of introducing disease
Disease
A disease is an abnormal condition affecting the body of an organism. It is often construed to be a medical condition associated with specific symptoms and signs. It may be caused by external factors, such as infectious disease, or it may be caused by internal dysfunctions, such as autoimmune...
s to which the native fish species have no resistance
Immune system
An immune system is a system of biological structures and processes within an organism that protects against disease by identifying and killing pathogens and tumor cells. It detects a wide variety of agents, from viruses to parasitic worms, and needs to distinguish them from the organism's own...
, they are potentially a serious threat to the lake's ecosystem
Ecosystem
An ecosystem is a biological environment consisting of all the organisms living in a particular area, as well as all the nonliving , physical components of the environment with which the organisms interact, such as air, soil, water and sunlight....
.

Nicaraguans call the Lake Lago Cocibolca or Mar Dulce (literally, Sweet Sea; in Spanish, freshwater is agua dulce). The lake has sizeable waves driven by the easterly winds blowing west to the Pacific Ocean
Pacific Ocean
The Pacific Ocean is the largest of the Earth's oceanic divisions. It extends from the Arctic in the north to the Southern Ocean in the south, bounded by Asia and Australia in the west, and the Americas in the east.At 165.2 million square kilometres in area, this largest division of the World...
. The lake holds Ometepe
Ometepe
Ometepe is an island formed by two volcanoes rising from Lake Nicaragua in the Republic of Nicaragua. Its name derives from the Nahuatl words ome and tepetl , meaning two mountains...
and Zapatera which are both volcanic islands, as well as the archipelago
Archipelago
An archipelago , sometimes called an island group, is a chain or cluster of islands. The word archipelago is derived from the Greek ἄρχι- – arkhi- and πέλαγος – pélagos through the Italian arcipelago...
of the Solentiname Islands
Solentiname Islands
The Solentiname Islands are an archipelago towards the southern end of Lake Nicaragua in the Nicaraguan department of Río San Juan...
. The lake has a reputation for periodically powerful, unnavigable storms.