Encyclopedia
Lake Nemi is a small circular volcanic lake in the Lazio region of Italy
Italy
Italy , officially the Italian Republic languages]] under the European Charter for Regional or Minority Languages. In each of these, Italy's official name is as follows:;;;;;;;;), is a unitary parliamentary republic in South-Central Europe. To the north it borders France, Switzerland, Austria and...
30 km (18.6 mi) south of Rome
Rome
Rome is the capital of Italy and the country's largest and most populated city and comune, with over 2.7 million residents in . The city is located in the central-western portion of the Italian Peninsula, on the Tiber River within the Lazio region of Italy.Rome's history spans two and a half...
, taking its name from Nemi
Nemi
Nemi is a town and comune in the province of Rome , in the Alban Hills overlooking Lake Nemi, a volcanic crater lake. It is 6 km NW of Velletri and about 30 km southeast of Rome....
, the largest town in the area, that overlooks it from a height.

The lake is most famous for its sunken Roman ships
Nemi ships
The Nemi Ships were ships built by the Roman emperor Caligula in the 1st century AD at Lake Nemi. Although the purpose of the ships is only speculated on, the larger ship was essentially an elaborate floating palace, which contained quantities of marble, mosaic floors, heating and plumbing such as...
. These ships were very large and technologically advanced for their time.

The lake is sacred to the goddess Diana
Diana (mythology)
In Roman mythology, Diana was the goddess of the hunt and moon and birthing, being associated with wild animals and woodland, and having the power to talk to and control animals. She was equated with the Greek goddess Artemis, though she had an independent origin in Italy...
and the site of the festival Nemoralia
Nemoralia
The festival of Nemoralia was celebrated by the ancient Romans either on the 13-15 August or on the August Full Moon, in honor of the goddess Diana...
. Emperors Caligula
Caligula
Caligula , also known as Gaius, was Roman Emperor from 37 AD to 41 AD. Caligula was a member of the house of rulers conventionally known as the Julio-Claudian dynasty. Caligula's father Germanicus, the nephew and adopted son of Emperor Tiberius, was a very successful general and one of Rome's most...
and Tiberius
Tiberius
Tiberius , was Roman Emperor from 14 AD to 37 AD. Tiberius was by birth a Claudian, son of Tiberius Claudius Nero and Livia Drusilla. His mother divorced Nero and married Augustus in 39 BC, making him a step-son of Octavian...
sailed Lake Nemi not merely to cool off in summer, but to assert themselves as Nemorensis, rulers aligning with the Stars, wedded to Earth's perpetual life-force.

At the Hotel Diana on the Western edge of the crater at Via Nemorense, there is a fine exhibit of the archeological excavation of the late 1920s which exposed the enormous structure which Caligula had ordered built.


The lake in art and literature 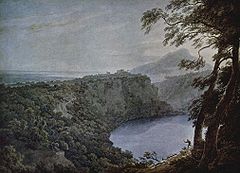