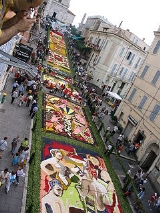 Encyclopedia
Genzano di Roma is a town and comune
Comune
In Italy, the comune is the basic administrative division, and may be properly approximated in casual speech by the English word township or municipality.-Importance and function:...
in the province of Rome
Province of Rome
The Province of Rome , is a province in the Lazio region of Italy. The province can be viewed as the extended metropolitan area of the city of Rome, although in its more peripheral portions, especially to the north, it comprises towns surrounded by rural landscape.-Geography:The Province of Rome...
, in the Lazio region of central Italy
Italy
Italy , officially the Italian Republic languages]] under the European Charter for Regional or Minority Languages. In each of these, Italy's official name is as follows:;;;;;;;;), is a unitary parliamentary republic in South-Central Europe. To the north it borders France, Switzerland, Austria and...
. It is one of the Castelli Romani
Castelli Romani
The Castelli Romani is a group of communes in the province of Rome, Italy. They are located at short distance south-east to Rome, at the feet of the Alban Hills.-Overview:...
, at a distance of 29 km from Rome
Rome
Rome is the capital of Italy and the country's largest and most populated city and comune, with over 2.7 million residents in . The city is located in the central-western portion of the Italian Peninsula, on the Tiber River within the Lazio region of Italy.Rome's history spans two and a half...
, on the Alban Hills
Alban Hills
The Alban Hills are the site of a quiescent volcanic complex in Italy, located southeast of Rome and about north of Anzio.The dominant peak is Monte Cavo. There are two small calderas which contain lakes, Lago Albano and Lake Nemi...
.

The origin of the name Genzano is still disputed. According to a version, the hill overlooking the Lake of Nemi on which the city is situated was once devoted to the goddess Cynthia, whose cult was associated to that of Diana Nemorensis
Diana (mythology)
In Roman mythology, Diana was the goddess of the hunt and moon and birthing, being associated with wild animals and woodland, and having the power to talk to and control animals. She was equated with the Greek goddess Artemis, though she had an independent origin in Italy...
. Another version relates its origin to the Gentiani family. For others the presence on the hills, at that time of the "tribus or gens Cynthia" originators and custodians of the cult of courage, in "Castrum Gentianum" from them the derivation of the name Genzano.
During the Roman empire the area was inhabited by wealthy Roman citizens who wished to benefit from the cleaner air, uncontaminated water and cooler temperatures during the hot summer months. The remains of many ancient Roman villas are to be found everywhere in the surroundings. The most impressive being the walls of the "villa of the Antonini" where the later Roman emperor Antoninus Pius (138 -161 AD.) was born. The Herculean Sarcophagus of Genzano
Herculean Sarcophagus of Genzano
The Herculean Sarcophagus of Genzano is a Roman Sarcophagus from Genzano which is in store at the British Museum. It features the Twelve Labours of Hercules. It has been dated to about AD 150-180...
, currently in the British Museum
British Museum
The British Museum is a museum of human history and culture in London. Its collections, which number more than seven million objects, are amongst the largest and most comprehensive in the world and originate from all continents, illustrating and documenting the story of human culture from its...
was found here.

In the 12th century a tower of the Gandolfi
Gandolfi
Gandolfi is an Italian surname, from a Lombardic given name Gundulf.people called Gandolfi:* Ubaldo Gandolfi , an Italian painter* Gaetano Gandolfi , an Italian painter* Mauro Gandolfi , an Italian painter and printmaker...
family, lord of Castel Gandolfo
Castel Gandolfo
Castel Gandolfo is a small Italian town or comune in Lazio that occupies a height overlooking Lake Albano about 15 miles south-east of Rome, on the Alban Hills. It is best known as the summer residence of the Pope. It is an Italian town with the population of 8834...
, existed in the site. In 1183 Pope Lucius III
Pope Lucius III
Pope Lucius III , born Ubaldo, was pope from 1 September 1181 to his death.A native of the independent republic of Lucca, he was born ca. 1100 as Ubaldo, son of Orlando. He is commonly referred to as a member of the aristocratic family of Allucingoli, but this is not proven...
gave it to the Cistercian monks of St. Anastasius of Aquae Salviae in Rome
Rome
Rome is the capital of Italy and the country's largest and most populated city and comune, with over 2.7 million residents in . The city is located in the central-western portion of the Italian Peninsula, on the Tiber River within the Lazio region of Italy.Rome's history spans two and a half...
. In 1235 they built a large castle around which the town later grew. In 1378 the Popes assigned it to Giordano Orsini
Giordano Orsini
Giordano Orsini was an Italian cardinal who enjoyed an extensive career in the early fifteenth century. He was a member of the powerful Roman family of the Orsini.-Biography:...
. The Cistercians and the Colonna alternatively ruled Genzano until 1563, when the castle was ceded for 150,000 scudo
Italian scudo
The scudo was the name for a number of coins used in Italy until the 19th century. The name, like that of the French écu and the Spanish and Portuguese escudo, was derived from the Latin scutum . From the 16th century, the name was used in Italy for large silver coins...
s to the Massimi, from which it was bought by Giuliano Cesarini.

In 1873 it was decided that the name of the town should be changed to Genzano di Roma to avoid confusion within the postal service as there are two towns in Italy called Genzano.

In the 19th and early 20th century it was seat of numerous peasant revolts; during World War II
World War II
World War II, or the Second World War , was a global conflict lasting from 1939 to 1945, involving most of the world's nations—including all of the great powers—eventually forming two opposing military alliances: the Allies and the Axis...
it suffered heavy damage under Allied bombings, 90% of its buildings being destroyed. 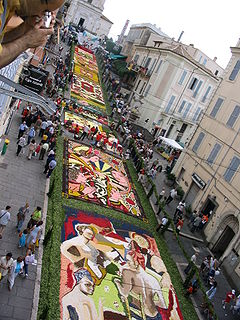 In June, a great folkloristic and religious exhibition, the "Infiorata". A whole street (Via Italo Belardi) is covered with allegorical carpets of flowers and a masked parade walk on these, with medieval and traditional clothes realized by town's women. For more than 2 centuries (from 1778) on Sunday and Monday following Corpus Christus feast the Infiorata a most suggestive manifestation of art, pride of the artists of Genzano has taken place . Each year the artists suggestions must conform to a previously agreed upon theme, such as The Colours of Michelangelo, or The Designs of Bernini. In the spring it has recently become tradition to have a "mini Infiorata" made by the children from the local schools.

Poets and writers wrote about the Infiorata:

Châtillon
Châtillon, Hauts-de-Seine
Châtillon is a commune in the southwestern suburbs of Paris, France. It is located from the center of Paris.The town was formerly named Châtillon-sous-Bagneux, and a relic of this denomination remains in at least one road sign in Vanves Châtillon is a commune in the southwestern suburbs of...
, France
France
The French Republic , The French Republic , The French Republic , (commonly known as France , is a unitary semi-presidential republic in Western Europe with several overseas territories and islands located on other continents and in the Indian, Pacific, and Atlantic oceans. Metropolitan France...
Merseburg
Merseburg
Merseburg is a town in the south of the German state of Saxony-Anhalt on the river Saale, approx. 14 km south of Halle . It is the capital of the Saalekreis district. It had a diocese founded by Archbishop Adalbert of Magdeburg....
, Germany
Germany
Germany , officially the Federal Republic of Germany , is a federal parliamentary republic in Europe. The country consists of 16 states while the capital and largest city is Berlin. Germany covers an area of 357,021 km2 and has a largely temperate seasonal climate...
Mokotów
Mokotów
Mokotów is a dzielnica of Warsaw, the capital of Poland. Mokotów is densely populated. It is a seat to many foreign embassies and companies...
, Poland
Poland
Poland , officially the Republic of Poland , is a country in Central Europe bordered by Germany to the west; the Czech Republic and Slovakia to the south; Ukraine, Belarus and Lithuania to the east; and the Baltic Sea and Kaliningrad Oblast, a Russian exclave, to the north...