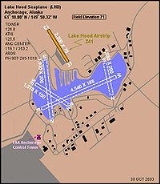 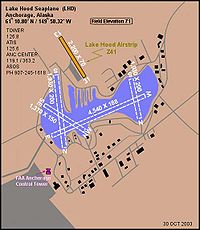 Lake Hood Seaplane Base is a state-owned seaplane
Seaplane
A seaplane is a fixed-wing aircraft capable of taking off and landing on water. Seaplanes that can also take off and land on airfields are a subclass called amphibian aircraft...
base located three nautical miles (6 km) southwest of the central business district
Central business district
A central business district is the commercial and often geographic heart of a city. In North America this part of a city is commonly referred to as "downtown" or "city center"...
of Anchorage
Anchorage, Alaska
Anchorage is a unified home rule municipality in the southcentral part of the U.S. state of Alaska. It is the northernmost major city in the United States...
in the U.S. state
U.S. state
A U.S. state is any one of the 50 federated states of the United States of America that share sovereignty with the federal government. Because of this shared sovereignty, an American is a citizen both of the federal entity and of his or her state of domicile. Four states use the official title of...
of Alaska
Alaska
Alaska is the largest state in the United States by area. It is situated in the northwest extremity of the North American continent, with Canada to the east, the Arctic Ocean to the north, and the Pacific Ocean to the west and south, with Russia further west across the Bering Strait...
. The Lake Hood Strip
Lake Hood Strip
Lake Hood Strip is a state-owned public-use general aviation airstrip adjacent to the Lake Hood Seaplane Base , three miles southwest of downtown Anchorage in the U.S. state of Alaska...
is a gravel runway located adjacent to the seaplane base.

Although most U.S. airports use the same three-letter location identifier
Location identifier
A location identifier is a symbolic representation for the name and the location of an airport, navigation aid, or weather station, and is used for manned air traffic control facilities in air traffic control, telecommunications, computer programming, weather reports, and related services.-ICAO...
for the FAA
Federal Aviation Administration
The Federal Aviation Administration is the national aviation authority of the United States. An agency of the United States Department of Transportation, it has authority to regulate and oversee all aspects of civil aviation in the U.S...
and IATA
International Air Transport Association
The International Air Transport Association is an international industry trade group of airlines headquartered in Montreal, Quebec, Canada, where the International Civil Aviation Organization is also headquartered. The executive offices are at the Geneva Airport in SwitzerlandIATA's mission is to...
, Lake Hood is assigned LHD by the FAA but has no designation from the IATA. The airport's ICAO
International Civil Aviation Organization
The International Civil Aviation Organization , pronounced , , is a specialized agency of the United Nations. It codifies the principles and techniques of international air navigation and fosters the planning and development of international air transport to ensure safe and orderly growth...
identifier is PALH.

Lake Hood Strip has one runway
Runway
According to ICAO a runway is a "defined rectangular area on a land aerodrome prepared for the landing and take-off of aircraft." Runways may be a man-made surface or a natural surface .- Orientation and dimensions :Runways are named by a number between 01 and 36, which is generally one tenth...
designated 13/31 with a gravel
Gravel
Gravel is composed of unconsolidated rock fragments that have a general particle size range and include size classes from granule- to boulder-sized fragments. Gravel can be sub-categorized into granule and cobble...
surface measuring 2,200 by 75 feet (671 x 23 m).

For 12-month period ending August 1, 2005, the seaplane base had 69,400 aircraft operations, an average of 190 per day: 88% general aviation
General aviation
General aviation is one of the two categories of civil aviation. It refers to all flights other than military and scheduled airline and regular cargo flights, both private and commercial. General aviation flights range from gliders and powered parachutes to large, non-scheduled cargo jet flights...
, 12% air taxi
Air taxi
An air taxi is an air charter passenger or cargo aircraft which operates on an on-demand basis.-Regulation:In the United States, air taxi and air charter operations are governed by Part 135 of the Federal Aviation Regulations , unlike the larger scheduled air carriers which are governed by more...
and <1% military. There are 781 aircraft based at this seaplane base: 97% single engine
Aircraft engine
An aircraft engine is the component of the propulsion system for an aircraft that generates mechanical power. Aircraft engines are almost always either lightweight piston engines or gas turbines...
and 3% multi-engine.