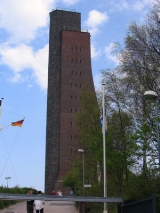 Encyclopedia
The Laboe Naval Memorial is a memorial
Memorial
A memorial is an object which serves as a focus for memory of something, usually a person or an event. Popular forms of memorials include landmark objects or art objects such as sculptures, statues or fountains, and even entire parks....
located in Laboe
Laboe
Laboe is a municipality in the district of Plön, in Schleswig-Holstein, Germany. It is situated on the Baltic Sea coast, approximately 10 km northeast of Kiel. The Laboe Naval Memorial is located within the municipality, as is the submarine U-995....
, near Kiel
Kiel
Kiel is the capital and most populous city in the northern German state of Schleswig-Holstein, with a population of 238,049 .Kiel is approximately north of Hamburg. Due to its geographic location in the north of Germany, the southeast of the Jutland peninsula, and the southwestern shore of the...
, in Schleswig-Holstein
Schleswig-Holstein
Schleswig-Holstein is the northernmost of the sixteen states of Germany, comprising most of the historical duchy of Holstein and the southern part of the former Duchy of Schleswig...
, Germany
Germany
Germany , officially the Federal Republic of Germany , is a federal parliamentary republic in Europe. The country consists of 16 states while the capital and largest city is Berlin. Germany covers an area of 357,021 km2 and has a largely temperate seasonal climate...
. Started in 1927 and completed in 1936, the monument originally memorialized the World War I
World War I
World War I , which was predominantly called the World War or the Great War from its occurrence until 1939, and the First World War or World War I thereafter, was a major war centred in Europe that began on 28 July 1914 and lasted until 11 November 1918...
war dead of the Kaiserliche Marine
Kaiserliche Marine
The Imperial German Navy was the German Navy created at the time of the formation of the German Empire. It existed between 1871 and 1919, growing out of the small Prussian Navy and Norddeutsche Bundesmarine, which primarily had the mission of coastal defense. Kaiser Wilhelm II greatly expanded...
, with the Kriegsmarine
Kriegsmarine
The Kriegsmarine was the name of the German Navy during the Nazi regime . It superseded the Kaiserliche Marine of World War I and the post-war Reichsmarine. The Kriegsmarine was one of three official branches of the Wehrmacht, the unified armed forces of Nazi Germany.The Kriegsmarine grew rapidly...
dead of World War II
World War II
World War II, or the Second World War , was a global conflict lasting from 1939 to 1945, involving most of the world's nations—including all of the great powers—eventually forming two opposing military alliances: the Allies and the Axis...
being added after 1945. In 1954, it was rededicated to commemorate the sailors of all nationalities who died during the World Wars.

The monument consists of a 72-metre high tower
Tower
A tower is a tall structure, usually taller than it is wide, often by a significant margin. Towers are distinguished from masts by their lack of guy-wires....
with an observation deck
Observation deck
__FORCETOC__ An observation deck, observation platform or viewing platform is an elevated sightseeing platform usually situated upon a tall architectural structure such as a skyscraper or observation tower...
atop the tower. The deck stands a total 85 m above sea level. A hall of remembrance and World War II-era German submarine U-995, which houses a technical museum, both sit near the foot of the monument, and the site is a popular tourist venue. U-995 is the world's only remaining Type VII U-boat.

The tower was designed by architect Gustav August Munzer
Gustav August Munzer
Gustav August Munzer was a German architect. Munzer grew up on a farm near Föritz in southern Thuringia. He received his basic education in the small settlement of Mupperg, and later became a bricklayer, working on several construction sites in the area. After becoming a trained stonecutter he...
, who stated that the form was not meant to represent anything specific but was to inspire positive feelings in those who look at it. It is frequently associated with the stem of a viking
Viking
The term Viking is customarily used to refer to the Norse explorers, warriors, merchants, and pirates who raided, traded, explored and settled in wide areas of Europe, Asia and the North Atlantic islands from the late 8th to the mid-11th century.These Norsemen used their famed longships to...
ship or the conning tower of a submarine.

The Monument to Italian Sailors in Brindisi
Brindisi
Brindisi is a city in the Apulia region of Italy, the capital of the province of Brindisi, off the coast of the Adriatic Sea.Historically, the city has played an important role in commerce and culture, due to its position on the Italian Peninsula and its natural port on the Adriatic Sea. The city...
, Italy
Italy
Italy , officially the Italian Republic languages]] under the European Charter for Regional or Minority Languages. In each of these, Italy's official name is as follows:;;;;;;;;), is a unitary parliamentary republic in South-Central Europe. To the north it borders France, Switzerland, Austria and...
(begun in 1932, dedicated in 1933) bears a resemblance to the Laboe tower.