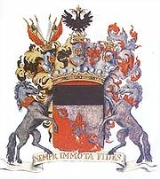 Encyclopedia
Vorontsov, also Woronzow, Woroncow is a celebrated Russian family, which attained the dignity of Count
Count
A count or countess is an aristocratic nobleman in European countries. The word count came into English from the French comte, itself from Latin comes—in its accusative comitem—meaning "companion", and later "companion of the emperor, delegate of the emperor". The adjective form of the word is...
s of the Holy Roman Empire
Holy Roman Empire
The Holy Roman Empire was a realm that existed from 962 to 1806 in Central Europe.It was ruled by the Holy Roman Emperor. Its character changed during the Middle Ages and the Early Modern period, when the power of the emperor gradually weakened in favour of the princes...
in 1744 and Serene Princes of the Russian Empire
Russian Empire
The Russian Empire was a state that existed from 1721 until the Russian Revolution of 1917. It was the successor to the Tsardom of Russia and the predecessor of the Soviet Union...
in 1852. 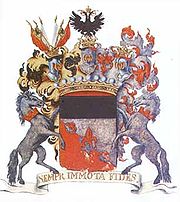 Most likely, the Vorontsovs represent a collateral branch of the great Velyaminov family of Muscovite boyar
Boyar
A boyar, or bolyar , was a member of the highest rank of the feudal Moscovian, Kievan Rus'ian, Bulgarian, Wallachian, and Moldavian aristocracies, second only to the ruling princes , from the 10th century through the 17th century....
s, which claimed male-line descent from a Varangian noble named Šimon
Šimon
Šimon was a Varangian whose story is related in the Kievan Patericon and his story concerns the creation of the Kievan cave monastery, where he is reported to have been its most important donor.-Story:...
. The Velyaminovs were hereditary mayor
Mayor
In many countries, a Mayor is the highest ranking officer in the municipal government of a town or a large urban city....
s of Moscow
Moscow
Moscow is the capital, the most populous city, and the most populous federal subject of Russia. The city is a major political, economic, cultural, scientific, religious, financial, educational, and transportation centre of Russia and the continent...
, until the office was abolished by Dmitry Donskoy, whose own mother came from this family.

During the reign of Peter III of Russia
Peter III of Russia
Peter III was Emperor of Russia for six months in 1762. He was very pro-Prussian, which made him an unpopular leader. He was supposedly assassinated as a result of a conspiracy led by his wife, who succeeded him to the throne as Catherine II.-Early life and character:Peter was born in Kiel, in...
, Vorontsov was the most powerful man in Russia, as his niece Elisabeth
Elizaveta Vorontsova
Elizaveta Romanovna Vorontsova was a mistress of Emperor Peter III of Russia. During their affair, Peter was rumored to have intentions of divorcing his wife Catherine to marry Vorontsova....
became the Emperor's mistress. Empress Catherine
Catherine II of Russia
Catherine II, also known as Catherine the Great , Empress of Russia, was born in Stettin, Pomerania, Prussia on as Sophie Friederike Auguste von Anhalt-Zerbst-Dornburg...
, alarmed by Peter's plans to divorce her and marry Vorontsova, deposed her husband, with a great help from her bosom friend, Ekaterina Vorontsova, the wife of Prince Dashkov. Ekaterina's brothers Alexander
Alexander Vorontsov
Count Alexander Romanovich Vorontsov was the Russian imperial chancellor during the early years of Alexander I's reign....
and Semyon Romanovich were both notable diplomats, and the latter's son Mikhail Semyonovich Vorontsov
Mikhail Semyonovich Vorontsov
Prince Mikhail Semyonovich Vorontsov , was a Russian prince and field-marshal, renowned for his success in the Napoleonic wars, and most famous for his participation in the Caucasian War from 1844 to 1853....
was a prominent general who led the Russian invasion of Caucasus
Caucasus
The Caucasus, also Caucas or Caucasia , is a geopolitical region at the border of Europe and Asia, and situated between the Black and the Caspian sea...
and colonisation of New Russia. The Vorontsovs from this branch were inveterate Anglophiles and entertained many English servants, painters, and architects.

Having no children, the last Prince Dashkov, son of Yekaterina Romanovna Vorontsova-Dashkova
Yekaterina Romanovna Vorontsova-Dashkova
Princess Yekaterina Romanovna Vorontsova-Dashkova was the closest female friend of Empress Catherine the Great and a major figure of the Russian Enlightenment...
, bequeathed his vast possessions and the Vorontsov-Dashkov surname to his maternal cousin, who formed a junior branch of the Vorontsov family with the distinct surname. Its most notable representative was Count Illarion Ivanovich Vorontsov-Dashkov (1837–1916), who served as Minister of Imperial Properties in 1881–97 and the General Governor of Caucasus
Caucasus
The Caucasus, also Caucas or Caucasia , is a geopolitical region at the border of Europe and Asia, and situated between the Black and the Caspian sea...
in 1905–15. He was officially in charge of the victorious Russian forces in the Battle of Sarikamis
Battle of Sarikamis
The Battle of Sarikamish was an engagement between the Russian and Ottoman empires during World War I. It took place from December 22, 1914 to January 17, 1915 as part of the Caucasus Campaign. The outcome was a Russian victory. The Ottomans employed a strategy which demanded that their troops be...
during the early months of World War I
World War I
World War I , which was predominantly called the World War or the Great War from its occurrence until 1939, and the First World War or World War I thereafter, was a major war centred in Europe that began on 28 July 1914 and lasted until 11 November 1918...
.