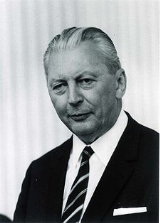 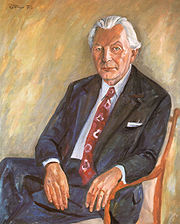 Kurt Georg Kiesinger (ˈkʊʁt ˈɡeːɔʁk ˈkiːzɪŋɐ; 6 April 1904–9 March 1988) was a German
Germany
Germany , officially the Federal Republic of Germany , is a federal parliamentary republic in Europe. The country consists of 16 states while the capital and largest city is Berlin. Germany covers an area of 357,021 km2 and has a largely temperate seasonal climate...
politician affiliated with the CDU
Christian Democratic Union (Germany)
The Christian Democratic Union of Germany is a Christian democratic and conservative political party in Germany. It is regarded as on the centre-right of the German political spectrum...
and Chancellor of West Germany
West Germany
West Germany is the common English, but not official, name for the Federal Republic of Germany or FRG in the period between its creation in May 1949 to German reunification on 3 October 1990....
from 1 December 1966 until 21 October 1969.

Born in Ebingen
Ebingen
Ebingen is a town in the large district of Albstadt, district Zollernalbkreis, in the German state of Baden-Württemberg. It is located on the river Schmiecha, a left-hand tributary of the Danube, south of Tübingen and west of Ulm.- History :...
, Kingdom of Württemberg
Kingdom of Württemberg
The Kingdom of Württemberg was a state that existed from 1806 to 1918, located in present-day Baden-Württemberg, Germany. It was a continuation of the Duchy of Württemberg, which came into existence in 1495...
(now Baden-Württemberg
Baden-Württemberg
Baden-Württemberg is one of the 16 states of Germany. Baden-Württemberg is in the southwestern part of the country to the east of the Upper Rhine, and is the third largest in both area and population of Germany's sixteen states, with an area of and 10.7 million inhabitants...
), Kiesinger was educated in Berlin
Berlin
Berlin is the capital city of Germany and is one of the 16 states of Germany. With a population of 3.45 million people, Berlin is Germany's largest city. It is the second most populous city proper and the seventh most populous urban area in the European Union...
and became a lawyer
Lawyer
A lawyer, according to Black's Law Dictionary, is "a person learned in the law; as an attorney, counsel or solicitor; a person who is practicing law." Law is the system of rules of conduct established by the sovereign government of a society to correct wrongs, maintain the stability of political...
. As a student, he joined the (non-couleur
Couleur
Couleur is the expression used in European Studentenverbindungen for the headgears and ribbons worn by members of these student societies....
wearing) Roman Catholic corporation
Kartellverband katholischer deutscher Studentenvereine
The Kartellverband katholischer deutscher Studentenvereine) is a German academic corporate association with ninety member corporations in Germany, Austria and Switzerland...
s Alamannia Tübingen and Askania-Burgundia Berlin. He became a member of the Nazi Party in 1933. From 1940 on, Kiesinger worked at the German foreign ministry's radio propaganda
Propaganda
Propaganda is a form of communication that is aimed at influencing the attitude of a community toward some cause or position so as to benefit oneself or one's group....
department where he was responsible for that ministry's connection with the propaganda ministry. After the war, he was interned and spent 18 months in the Ludwigsburg camp
Stalag V-A
Stalag V-A was a German prisoner of war camp located on the southern outskirts of Ludwigsburg, Germany, during World War II.-Operation:The prison camp had been constructed on the site of a former German military installation, which had once billeted German cavalry troops and their horses...
before being released as a case of mistaken identity.
During the controversies of 1966 the magazine Der Spiegel
Der Spiegel
Der Spiegel is a German weekly news magazine published in Hamburg. It is one of Europe's largest publications of its kind, with a weekly circulation of more than one million.-Overview:...
unearthed a Nazi-era protocol of the SS-Reichssicherheitshauptamt that noted that he was hampering anti-Jewish actions in his department.

By the time the first national elections were held in the Federal Republic in 1949, Kiesinger had joined the Christian Democratic Union (CDU) and won a seat in the Bundestag
Bundestag
The Bundestag is a federal legislative body in Germany. In practice Germany is governed by a bicameral legislature, of which the Bundestag serves as the lower house and the Bundesrat the upper house. The Bundestag is established by the German Basic Law of 1949, as the successor to the earlier...
, the West German parliament. In 1951 he became a member of the CDU executive board. During that time, he became known for his rhetorical brilliance, as well as his in-depth knowledge of foreign affairs. However, despite the recognition he enjoyed within the Christian Democrat parliamentary faction, he was passed over during various cabinet reshuffles. Consequently, he decided to switch from federal to state politics: He was appointed Prime Minister (Ministerpräsident) of the state of Baden-Württemberg
Baden-Württemberg
Baden-Württemberg is one of the 16 states of Germany. Baden-Württemberg is in the southwestern part of the country to the east of the Upper Rhine, and is the third largest in both area and population of Germany's sixteen states, with an area of and 10.7 million inhabitants...
on 17 December 1958, an office in which he served until 1 December 1966.

In 1966 following the collapse of the existing CDU/CSU
CDU/CSU
CDU/CSU, unofficially also referred to as the Union parties or the Union, is the name of the Bundestag parliamentary faction comprising the Christian Democratic Union of Germany and the Christian Social Union of Bavaria , considered to be sister parties...
-FDP coalition Kiesinger was elected to replace Ludwig Erhard
Ludwig Erhard
Ludwig Wilhelm Erhard was a German politician affiliated with the CDU and Chancellor of West Germany from 1963 until 1966. He is notable for his leading role in German postwar economic reform and economic recovery , particularly in his role as Minister of Economics under Chancellor Konrad Adenauer...
as Chancellor, heading a new CDU/CSU-SPD
Social Democratic Party of Germany
The Social Democratic Party of Germany is a social-democratic political party in Germany...
alliance. The government formed by Kiesinger remained in power for nearly three years with the SPD leader Willy Brandt
Willy Brandt
Willy Brandt, born Herbert Ernst Karl Frahm , was a German politician, Mayor of West Berlin 1957–1966, Chancellor of West Germany 1969–1974, and leader of the Social Democratic Party of Germany 1964–1987....
as Deputy Federal Chancellor and Foreign Minister. Kiesinger reduced tensions with the Soviet bloc nations establishing diplomatic relations with Czechoslovakia
Czechoslovakia
Czechoslovakia or Czecho-Slovakia was a sovereign state in Central Europe which existed from October 1918, when it declared its independence from the Austro-Hungarian Empire, until 1992...
, Romania
Romania
Romania is a country located at the crossroads of Central and Southeastern Europe, on the Lower Danube, within and outside the Carpathian arch, bordering on the Black Sea...
and Yugoslavia
Socialist Federal Republic of Yugoslavia
The Socialist Federal Republic of Yugoslavia was the Yugoslav state that existed from the abolition of the Yugoslav monarchy until it was dissolved in 1992 amid the Yugoslav Wars. It was a socialist state and a federation made up of six socialist republics: Bosnia and Herzegovina, Croatia,...
but he opposed any major conciliatory moves.

One of his low points as Chancellor was in 1968 when Nazi-hunter Beate Klarsfeld, who campaigns with her husband Serge Klarsfeld against Nazi criminals, publicly slapped him in the face during the 1968 Christian Democrat convention, while calling him a Nazi
Nazism
Nazism, the common short form name of National Socialism was the ideology and practice of the Nazi Party and of Nazi Germany...
. She did so in French and - whilst being dragged out of the room by two ushers - repeated her words in German saying "Kiesinger! Nazi! Abtreten!" ("Kiesinger! Nazi! Step down!") Kiesinger, holding his left cheek, did not respond. Up to his death he refused to comment on the incident. Other prominent critics included the writers Heinrich Böll
Heinrich Böll
Heinrich Theodor Böll was one of Germany's foremost post-World War II writers. Böll was awarded the Georg Büchner Prize in 1967 and the Nobel Prize for Literature in 1972.- Biography :...
and Günter Grass
Günter Grass
Günter Wilhelm Grass is a Nobel Prize-winning German author, poet, playwright, sculptor and artist.He was born in the Free City of Danzig...
, who wrote a 1966 open letter urging him not to accept the chancellorship, and the philosopher Karl Jaspers
Karl Jaspers
Karl Theodor Jaspers was a German psychiatrist and philosopher who had a strong influence on modern theology, psychiatry and philosophy. After being trained in and practicing psychiatry, Jaspers turned to philosophical inquiry and attempted to discover an innovative philosophical system...
, already a resident of Switzerland, who surrendered his German passport in protest.

After the election of 1969, the SPD preferred to form a coalition with the FDP, ending the uninterrupted post-war reign of the CDU chancellors. Kiesinger was succeeded as Chancellor by Willy Brandt
Willy Brandt
Willy Brandt, born Herbert Ernst Karl Frahm , was a German politician, Mayor of West Berlin 1957–1966, Chancellor of West Germany 1969–1974, and leader of the Social Democratic Party of Germany 1964–1987....
. Kiesinger continued to head the CDU/CSU in opposition until July 1971 and remained a member of the Bundestag until 1980. Of his memoirs only part one (Dark and Bright Years) was completed, covering the years up to 1958. He died in Tübingen
Tübingen
Tübingen is a traditional university town in central Baden-Württemberg, Germany. It is situated south of the state capital, Stuttgart, on a ridge between the Neckar and Ammer rivers.-Geography:...
. After a requiem mass in Stuttgart
Stuttgart
Stuttgart is the capital of the state of Baden-Württemberg in southern Germany. The sixth-largest city in Germany, Stuttgart has a population of 600,038 while the metropolitan area has a population of 5.3 million ....
's St. Eberhard church, his funeral procession was followed by protesters (mainly students) who wanted his entire legacy remembered - even after his death - especially his former membership in the Nazi Party.