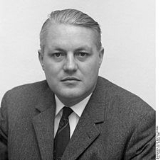 Encyclopedia
Gerhard Stoltenberg was a German
Germany
Germany , officially the Federal Republic of Germany , is a federal parliamentary republic in Europe. The country consists of 16 states while the capital and largest city is Berlin. Germany covers an area of 357,021 km2 and has a largely temperate seasonal climate...
politician (CDU) and minister in the cabinets of Ludwig Erhard
Ludwig Erhard
Ludwig Wilhelm Erhard was a German politician affiliated with the CDU and Chancellor of West Germany from 1963 until 1966. He is notable for his leading role in German postwar economic reform and economic recovery , particularly in his role as Minister of Economics under Chancellor Konrad Adenauer...
, Kurt Georg Kiesinger
Kurt Georg Kiesinger
Kurt Georg Kiesinger was a German politician affiliated with the CDU and Chancellor of West Germany from 1 December 1966 until 21 October 1969.-Early career and wartime activities:...
and Helmut Kohl
Helmut Kohl
Helmut Josef Michael Kohl is a German conservative politician and statesman. He was Chancellor of Germany from 1982 to 1998 and the chairman of the Christian Democratic Union from 1973 to 1998...
. He served as minister-president
Minister-President
A minister-president is the head of government in a number of European countries or subnational governments, in which a parliamentary or semi-presidential system of government prevails, who presides over the council of ministers...
of the German state (Land
States of Germany
Germany is made up of sixteen which are partly sovereign constituent states of the Federal Republic of Germany. Land literally translates as "country", and constitutionally speaking, they are constituent countries...
) of Schleswig-Holstein
Schleswig-Holstein
Schleswig-Holstein is the northernmost of the sixteen states of Germany, comprising most of the historical duchy of Holstein and the southern part of the former Duchy of Schleswig...
from 1971 to 1982 and as such as President
President of the German Bundesrat
In Germany, the President of the Bundesrat or President of the Federal Council is the chairperson or speaker of the Bundesrat . The presidency of the Bundesrat rotates among the heads of government of each of the states on an annual basis...
of the Bundesrat
Bundesrat of Germany
The German Bundesrat is a legislative body that represents the sixteen Länder of Germany at the federal level...
in 1977/78.

Stoltenberg was born in northern Germany in Kiel
Kiel
Kiel is the capital and most populous city in the northern German state of Schleswig-Holstein, with a population of 238,049 .Kiel is approximately north of Hamburg. Due to its geographic location in the north of Germany, the southeast of the Jutland peninsula, and the southwestern shore of the...
. In 1944 he became a soldier of the Wehrmacht
Wehrmacht
The Wehrmacht – from , to defend and , the might/power) were the unified armed forces of Nazi Germany from 1935 to 1945. It consisted of the Heer , the Kriegsmarine and the Luftwaffe .-Origin and use of the term:...
. After the war, when he was no longer a prisoner of war
Prisoner of war
A prisoner of war or enemy prisoner of war is a person, whether civilian or combatant, who is held in custody by an enemy power during or immediately after an armed conflict...
, he finished school in 1949 (Abitur
Abitur
Abitur is a designation used in Germany, Finland and Estonia for final exams that pupils take at the end of their secondary education, usually after 12 or 13 years of schooling, see also for Germany Abitur after twelve years.The Zeugnis der Allgemeinen Hochschulreife, often referred to as...
). Stoltenberg began to study history, sociology and philosophy at the University of Kiel. In 1954 he graduated as a Doctor of Philosophy
Doctor of Philosophy
Doctor of Philosophy, abbreviated as Ph.D., PhD, D.Phil., or DPhil , in English-speaking countries, is a postgraduate academic degree awarded by universities...
and worked as a scientist
Scientist
A scientist in a broad sense is one engaging in a systematic activity to acquire knowledge. In a more restricted sense, a scientist is an individual who uses the scientific method. The person may be an expert in one or more areas of science. This article focuses on the more restricted use of the word...
in Kiel. In 1960 he became a professor
Professor
A professor is a scholarly teacher; the precise meaning of the term varies by country. Literally, professor derives from Latin as a "person who professes" being usually an expert in arts or sciences; a teacher of high rank...
. In the years 1965 and again 1969/1970 Stoltenberg was the director of the company Friedrich Krupp
Friedrich Krupp
Friedrich Krupp was a German steel manufacturer and founder of the Krupp family commercial empire that is now subsumed into ThyssenKrupp AG. He launched the family's metal-based activities, building a small steel-foundry in Essen in 1811. He was the father of the arms manufacturer Alfred Krupp....
in Essen. In 2001 he died in Bad Godesberg
Bad Godesberg
Bad Godesberg is a municipal district of Bonn, southern North Rhine-Westphalia, Germany. From 1949 till 1990 , the majority of foreign embassies to Germany were located in Bad Godesberg...
.

Stoltenberg was married and had two children. He was member of the Lutheran church.

Stoltenberg was member of the state parliament of Schleswig-Holstein from 1954 to 1957 and from 1971 to 1982. From 1957 to 1971 and from 1983 until 1998, Stoltenberg also served as a member of the federal German legislature, the Bundestag
Bundestag
The Bundestag is a federal legislative body in Germany. In practice Germany is governed by a bicameral legislature, of which the Bundestag serves as the lower house and the Bundesrat the upper house. The Bundestag is established by the German Basic Law of 1949, as the successor to the earlier...
. As a junior MP and member of the budget committee he was the first to introduce to the 1959 federal budget a flat grant of DM 5,000,000 for political education (training of party activists) to be transferred to federal party headquarters.

Gerhard Stoltenberg looked destined for West Germany's highest office as he made a brilliant start to his political career.
On May 24, 1971, Stoltenberg was elected minister-president of the state of Schleswig-Holstein and remained in this position until 1982.
In 1982, he became federal minister of finance under chancellor Helmut Kohl
Helmut Kohl
Helmut Josef Michael Kohl is a German conservative politician and statesman. He was Chancellor of Germany from 1982 to 1998 and the chairman of the Christian Democratic Union from 1973 to 1998...
. He left this position when he was appointed as minister of defence from 1989 on. He resigned from this position on March 31, 1992.
The source of this article is wikipedia, the free encyclopedia.  The text of this article is licensed under the GFDL.