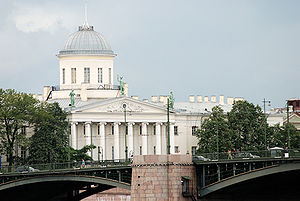 The Russian Literature Institute began its life in December 1905 as the main centre for Alexander Pushkin studies in Imperial Russia. A commission in charge of erecting a Pushkin monument in St. Petersburg, led by Sergei Oldenburg and Aleksey Shakhmatov
Aleksey Shakhmatov
Aleksey Aleksandrovich Shakhmatov was an outstanding Russian philologist credited with laying foundations for the science of textology.-Biography:...
, suggested a permanent institution be set up to preserve original Pushkin manuscripts:
The idea won support from all sides and was welcomed by Grand Duke Constantine Constantinovich
Grand Duke Constantine Constantinovich of Russia
Grand Duke Constantine Constantinovich of Russia was a grandson of Emperor Nicholas I of Russia, and a poet and playwright of some renown...
. It was understood that the Pushkin House would be housed in a purpose-built Neoclassical
Neoclassical architecture
Neoclassical architecture was an architectural style produced by the neoclassical movement that began in the mid-18th century, manifested both in its details as a reaction against the Rococo style of naturalistic ornament, and in its architectural formulas as an outgrowth of some classicizing...
edifice, or Odeon
Odeon (building)
Odeon is the name for several ancient Greek and Roman buildings built for singing exercises, musical shows and poetry competitions. They were generally small in size, especially compared with a full-size ancient Greek theatre....
, but the idea failed to materialize owing to lack of funds.

In 1907 Vladimir Kokovtsov
Vladimir Kokovtsov
Count Vladimir Nikolayevich Kokovtsov was a Russian prime minister during the reign of Nicholas II of Russia.- Biography :...
, Minister of Finance, came up with the proposal to acquire a huge collection of Pushkin manuscripts and memorabilia amassed in Paris by Alexander Onegin from 1879 onwards. The negotiations dragged on until Onegin's death in 1925, but the bulk of his collection eventually ended up in Russia. The most precious items had been presented to Onegin by Vasily Zhukovsky
Vasily Zhukovsky
Vasily Andreyevich Zhukovsky was the foremost Russian poet of the 1810s and a leading figure in Russian literature in the first half of the 19th century...
's son. The personal libraries and manuscripts of Ivan Krylov
Ivan Krylov
Ivan Andreyevich Krylov is Russia's best known fabulist. While many of his earlier fables were loosely based on Aesop and Jean de La Fontaine, later fables were original work, often satirizing the incompetent bureaucracy that was stifling social progress in his time.-Life:Ivan Krylov was born in...
, Pyotr Pletnev, and Andrei Bolotov were acquired from their heirs soon afterward.

The Pushkin House was originally a non-governmental organization
Non-governmental organization
A non-governmental organization is a legally constituted organization created by natural or legal persons that operates independently from any government. The term originated from the United Nations , and is normally used to refer to organizations that do not form part of the government and are...
specializing in Pushkin studies
Pushkin studies
The Pushkin studies is the branch of literary criticism which researches the life and works of Aleksandr Pushkin. The Wisconsin–Madison Prof. Aleksandr Dolinin divides the Pushkin studies in Russia into the Saint Petersburg and Moscow currents...
, which have been recognized by Russian authorities as a separate branch of scholarly inquiry. The Russian Revolution led to the shutdown of all non-governmental institutions, but the Pushkin House was spared and put under the umbrella of the Russian Academy of Sciences
Russian Academy of Sciences
The Russian Academy of Sciences consists of the national academy of Russia and a network of scientific research institutes from across the Russian Federation as well as auxiliary scientific and social units like libraries, publishers and hospitals....
(in 1918). Such "honorary" directors as Anatoly Lunacharsky, Lev Kamenev
Lev Kamenev
Lev Borisovich Kamenev , born Rozenfeld , was a Bolshevik revolutionary and a prominent Soviet politician. He was briefly head of state of the new republic in 1917, and from 1923-24 the acting Premier in the last year of Lenin's life....
and Maksim Gorky ensured its safe passage through the hardships of the Revolution.

This entailed the extension of its scope to encompass all Russian classical writers of the 19th century. In 1920 the Pushkin House was renamed the Institute of New Russian Literature to reflect its new purpose. Its main object was to prepare highly authoritative "academic" editions of works by Pushkin, Mikhail Lermontov
Mikhail Lermontov
Mikhail Yuryevich Lermontov , a Russian Romantic writer, poet and painter, sometimes called "the poet of the Caucasus", became the most important Russian poet after Alexander Pushkin's death in 1837. Lermontov is considered the supreme poet of Russian literature alongside Pushkin and the greatest...
, Vissarion Belinsky
Vissarion Belinsky
Vissarion Grigoryevich Belinsky was a Russian literary critic of Westernizing tendency. He was an associate of Alexander Herzen, Mikhail Bakunin , and other critical intellectuals...
, Ivan Turgenev
Ivan Turgenev
Ivan Sergeyevich Turgenev was a Russian novelist, short story writer, and playwright. His first major publication, a short story collection entitled A Sportsman's Sketches, is a milestone of Russian Realism, and his novel Fathers and Sons is regarded as one of the major works of 19th-century...
, Nikolai Nekrasov, Fyodor Dostoevsky
Fyodor Dostoevsky
Fyodor Mikhaylovich Dostoyevsky was a Russian writer of novels, short stories and essays. He is best known for his novels Crime and Punishment, The Idiot and The Brothers Karamazov....
, and other luminaries of the previous century.

In 1927 Pushkin House moved from the crammed rooms in the Academy of Sciences building
Kunstkamera
The Kunstkamera was the first museum in Russia. Established by Peter the Great and completed in 1727, the Kunstkammer Building hosts the Peter the Great Museum of Anthropology and Ethnography, with a collection of almost 2,000,000 items...
to the magnificent neo-Palladian Customs House, built after Giovanni Francesco Lucchini
Giovanni Francesco Lucchini
Giovanni Francesco Lucchini was an Italian architect. The son of architect Luca Lucchini, he is best known for designing the Teatro Gaetano Donizetti in Bergamo....
's designs in 1829-32 and situated just around the Strelka. It was to the original Kunstkamera rooms that Alexander Blok
Alexander Blok
Alexander Alexandrovich Blok was a Russian lyrical poet.-Life and career:Blok was born in Saint Petersburg, into a sophisticated and intellectual family. Some of his relatives were literary men, his father being a law professor in Warsaw, and his maternal grandfather the rector of Saint Petersburg...
referred in his last poem To Pushkin House, celebrating Pushkin's heritage as a gleam of hope during the chaos and confusion of the post-revolutionary years:
The Pushkin House remained open during the gruesome Siege of Leningrad
Siege of Leningrad
The Siege of Leningrad, also known as the Leningrad Blockade was a prolonged military operation resulting from the failure of the German Army Group North to capture Leningrad, now known as Saint Petersburg, in the Eastern Front theatre of World War II. It started on 8 September 1941, when the last...
, although most of the staff and manuscripts were evacuated to other cities. Following the war the institute continued as a prominent academic centre for Russian literature, employing such leading scholars as Boris Eikhenbaum and Dmitry Likhachov.

The collections of the Pushkin House, partly housed in a modern block hidden behind the Neoclassical facade, include numerous manuscripts from the 13th century onward, portraits and personal documents of leading Russian authors, as well as a galaxy of rare music recordings. The institution has a complex structure and is subdivided into several departments:


The Pushkin memorial houses in Mikhailovskoye, Trigorskoye, Tsarskoe Selo, and on the Moyka River are also affiliated with the Pushkin House.