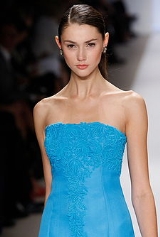 You are a Supermodel, Cycle 1
You are a Supermodel, Cycle 1
You are a Supermodel, Cycle 1 was the first Cycle of the Russian reality show on the STS TV channel, a competition of non-professional aspiring models for a contract with the international model agency Of Next and a prize of $250.000...
was held in 2004 and was won by the then 17-year-old Kahnovich. She refused the first prize, which was an agency contract with NEXT as she already got a more lucrative offer from IMG Models
IMG Models
IMG Models is one of the major international modeling agencies, currently representing only female models. Its mother office is in New York City, with branches in Paris, London, Milan and Hong Kong. It is a division of New York, NY-based IMG...
in the time between the show was taped and the final was aired. When her victory was officially announced Ksanovich already moved to Paris.
She has since walked fashion shows for names such as Versace
Versace
Gianni Versace S.p.A. , usually referred to as Versace, is an Italian fashion label founded by Gianni Versace in 1978.The first Versace boutique was opened in Milan's Via della Spiga in 1978, and its popularity was immediate. Today, Versace is one of the world's leading international fashion houses...
, Gucci
Gucci
The House of Gucci, better known simply as Gucci , is an Italian fashion and leather goods label, part of the Gucci Group, which is owned by French company PPR...
, Hermes
Hermes
Hermes is the great messenger of the gods in Greek mythology and a guide to the Underworld. Hermes was born on Mount Kyllini in Arcadia. An Olympian god, he is also the patron of boundaries and of the travelers who cross them, of shepherds and cowherds, of the cunning of thieves, of orators and...
, Louis Vuitton
Louis Vuitton
Louis Vuitton Malletier – commonly referred to as Louis Vuitton , or shortened to LV – is a French fashion house founded in 1854 by Louis Vuitton. The label is well known for its LV monogram, which is featured on most products, ranging from luxury trunks and leather goods to ready-to-wear, shoes,...
, Christian Dior
Christian Dior
Christian Dior , was a French fashion designer, best known as the founder of one of the world's top fashion houses, also called Christian Dior.-Life:...
, and Dolce and Gabbana in New York, Paris, and Milan. She has also walked for Haute Couture shows for Elie Saab
Elie Saab
Elie Saab , sometimes known simply as 'ES', is a Lebanese fashion designer.In 1982, Saab launched his Beirut-based fashion label when he was 18 years old. His main workshop is in Lebanon. He also has workshops in Milan and Paris.Born to Maronite Catholic parents in Beirut, Saab is self-trained...
, Dior
Dior
Dior can mean:* Christian Dior SA, a French clothing retailer* In J. R. R. Tolkien's fictional Middle-earth legendarium:**Dior Eluchíl, a Half-elven of the First Age**Dior , a Steward of GondorDior is a surname, and may refer to:...
, and Lacroix
Lacroix
Notable people with last name containing Lacroix:* André Lacroix * André Lacroix * Antoine François Alfred Lacroix * Caroline Lacroix * Charles de la Croix...
.

She has been featured in advertisements for DOHC, Gucci
Gucci
The House of Gucci, better known simply as Gucci , is an Italian fashion and leather goods label, part of the Gucci Group, which is owned by French company PPR...
, and Richmond
John Richmond (fashion designer)
John Richmond is an English fashion designer based in Milan, he was born in Manchester in 1960 and moved to London, then eventually to Italy to pursue his dreams....
, and graced the covers of Cosmopolitan, Madame Figaro, Harper's Bazaar
Harper's Bazaar
Harper’s Bazaar is an American fashion magazine, first published in 1867. Harper’s Bazaar is published by Hearst and, as a magazine, considers itself to be the style resource for “women who are the first to buy the best, from casual to couture.”...
, and Amica and appeared in an editorial for French Vogue
Vogue (magazine)
Vogue is a fashion and lifestyle magazine that is published monthly in 18 national and one regional edition by Condé Nast.-History:In 1892 Arthur Turnure founded Vogue as a weekly publication in the United States. When he died in 1909, Condé Montrose Nast picked up the magazine and slowly began...
and French Marie Claire
Marie Claire
Marie Claire is a monthly women's magazine first published in France but also distributed in other countries with editions specific to them and in their languages. While each country shares its own special voice with its audience, the United States edition focuses on women around the world and...
.
The source of this article is wikipedia, the free encyclopedia.  The text of this article is licensed under the GFDL.