Encyclopedia
The Kremlin Wall is a defensive wall that surrounds the Moscow Kremlin
Moscow Kremlin
The Moscow Kremlin , sometimes referred to as simply The Kremlin, is a historic fortified complex at the heart of Moscow, overlooking the Moskva River , Saint Basil's Cathedral and Red Square and the Alexander Garden...
, recognizable by the characteristic notches and its Kremlin towers. The original walls were likely a simple wooden fence with guard towers built in 1156.

One of the most symbolic constructions in Russia's history
History of Russia
The history of Russia begins with that of the Eastern Slavs and the Finno-Ugric peoples. The state of Garðaríki , which was centered in Novgorod and included the entire areas inhabited by Ilmen Slavs, Veps and Votes, was established by the Varangian chieftain Rurik in 862...
can be traced back to the 12th century when Moscow
Moscow
Moscow is the capital, the most populous city, and the most populous federal subject of Russia. The city is a major political, economic, cultural, scientific, religious, financial, educational, and transportation centre of Russia and the continent...
was founded in 1147. The original outpost was surrounded by the first walls in 1156, which was most likely a simple wooden fence with guard towers. Destroyed in 1238 by the Mongol-Tartar invasion
Mongol invasion of Rus
The Mongol invasion of Russia was resumed on 21 December 1237 marking the resumption of the Mongol invasion of Europe, during which the Mongols attacked the medieval powers of Poland, Kiev, Hungary, and miscellaneous tribes of less organized peoples...
, the Moscow Kremlin was rebuilt by the Russian Knyaz
Knyaz
Kniaz, knyaz or knez is a Slavic title found in most Slavic languages, denoting a royal nobility rank. It is usually translated into English as either Prince or less commonly as Duke....
Ivan Kalita. In 1339-1340 he erected a bigger fortress on the site of the original outpost which was defended by massive oak
Oak
An oak is a tree or shrub in the genus Quercus , of which about 600 species exist. "Oak" may also appear in the names of species in related genera, notably Lithocarpus...
walls. Thought to be an impenetrable defence from raids, it was proven to be useless against fire which burned Moscow in 1365. 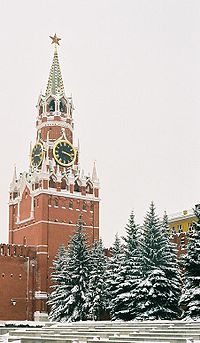 Nevertheless the young knyaz Dmitry Donskoy in 1367 began a rebuilding of the fortress. All winter long from the Mukachyovo village 30 virsts (country miles) from Moscow, limestone
Limestone
Limestone is a sedimentary rock composed largely of the minerals calcite and aragonite, which are different crystal forms of calcium carbonate . Many limestones are composed from skeletal fragments of marine organisms such as coral or foraminifera....
was hauled back on sledges, allowing the construction of the first stone walls to begin the following spring. Within a few years the city was adorned with beautiful white-stone walls. Whilst it was successfully invaded by the Tatars again in 1382, the massive fortification suffered no damage.

Dmitry Donskoy's walls stood for over a century, and it was during this period that Muscovy rose as the dominant power in Northeastern Rus. By the end of the 15 century, however, it was clear that the old constructions had long passed their time and Czar Ivan the Great's visions. Between 1485 and 1495 a whole brigade of Italian architects took part in the erection of a new defence perimeter including Antonio Fryazin (Antonio Gilardi), Marko Fryazin (Marco Ruffo), Pyotr Fryazin (Pietro Antonio Solari
Pietro Antonio Solari
Pietro Antonio Solari , also known as Pyotr Fryazin, was a Swiss Italian architect....
) and Alexei Fryazin the Old (Aloisio da Milano
Aloisio da Milano
Aloisio da Milano, also known as Aloisio da Carezano, Aleviz Milanets and Aleviz Fryazin was an Italian architect who worked in Muscovy....
). (The term Fryazin was used to refer to all people of Italian origin at this time). The new walls were erected by building on top of the older walls (some white stone can still be seen at the base in some places). The thickness and height was dramatically increased requiring many wooden houses which surrounded the Kremlin to be torn down.

In the following centuries Moscow expanded rapidly outside the Kremlin walls and as Russia's borders became more and more secure their defensive duty has all but passed. The cannons which were installed in the walls were removed after the turn of the 17th century, as was the second, smaller wall which repeated the perimeter on the outside. During the reign of Czar Alexei Romanov, the towers were built up with decorative spires and the walls were restored. However their historical mightiness was dampened as the material became brick not stone. Successive restorations of varying scale took place during the reigns of Empress Elizabeth and Alexander the First
Alexander I of Russia
Alexander I of Russia , served as Emperor of Russia from 23 March 1801 to 1 December 1825 and the first Russian King of Poland from 1815 to 1825. He was also the first Russian Grand Duke of Finland and Lithuania....
as well as the later Soviet and Russian times took place, preserving their original character and style. 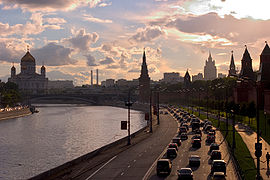 With an outer perimeter of 2235 metres, the Kremlin appears as a loose triangle, deviating from the geometric ideal on the southern side where instead of a straight line, it repeats the contours on the original hill on which the Kremlin rests. Because of this the vertical profile is by no means uniform, and the height at some places ranges from no more than 5 metres quadrupling to 19 metres elsewhere. The thickness of the walls also varies from 3.5 to 6.5 metres.

The top of the walls, along their entire length, have outwardly-invisible battle platforms which also range from 2 to 4.5 metres in width (in proportion to the thickness). A total of 1045 double-horned notched "teeth" crown the top of the walls, with a height ranging from 2 to 2.5 metres and thickness from 65 to 75 centimetres.

Some of the interior corridors inside the walls have rooms with no exterior illumination (kamoras) where particularly dangerous criminals were contained.

To date twenty towers survived, highlighting the walls. Built at a different time, the oldest one, Tainitskaya dates to 1485 whilst the newest one-Tsarskaya to 1680. Three of the towers, located in the corners of the castle have unique circular profiles. From the ground level it is only possible to enter six of the towers, the rest only from the walls.

Four gate towers exist, all crowned with ruby stars, they are Spasskaya, Borovitskaya, Troitskaya and Nikolskaya. Although up to the 1930 it was also possible to enter the Kremlin via the gates of Tainitskaya tower, however these were covered up yet leaving their portal clearly visible.

The main gates in the Spasskaya tower are normally (with the exception of official and religious ceremonies) closed to the public. The gates under the Nikolskaya tower are often used for service duties only. Visitors to the Kremlin normally enter the premises via the gates under the Troitksaya tower. Except for those who wish to visit the Armoury chamber and the Treasury fond, which are accessible via the gates of the Borovitskaya tower.

Before 1917 it was also possible to book an excursion, lasting over two hours, to walk along the perimeter of the Kremlin walls, beginning at the Borovitskaya tower.

The southern part of the wall faces the Moskva River
Moskva River
The Moskva River is a river that flows through the Moscow and Smolensk Oblasts in Russia, and is a tributary of the Oka River.-Etymology:...
. The eastern part faces Red Square
Red Square
Red Square is a city square in Moscow, Russia. The square separates the Kremlin, the former royal citadel and currently the official residence of the President of Russia, from a historic merchant quarter known as Kitai-gorod...
. The western part, formerly facing the Neglinnaya River
Neglinnaya River
The Neglinnaya River , also known as Neglimna, Neglinna, Neglinka , is a 7.5-km long underground river in the central part of Moscow and a tributary of the Moskva River. It flows in the tunnels under Samotechnaya Street, Tsvetnoy Boulevard, Neglinnaya Street and Alexander Garden and Zaryadye...
, is now part of the Alexander Garden
Alexander Garden
Alexander Gardens was one of the first urban public parks in Moscow, Russia. The park comprises three separate gardens, which stretch along all the length of the western Kremlin wall for between the building of the Moscow Manege and the Kremlin.-History:...
, the bridge which formally crossed the river still stands and is done in the same style as the Kremlin wall.