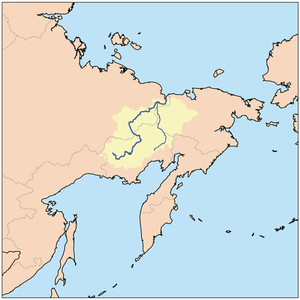 The Kolyma River is a river in northeastern Siberia
Siberia
Siberia is an extensive region constituting almost all of Northern Asia. Comprising the central and eastern portion of the Russian Federation, it was part of the Soviet Union from its beginning, as its predecessor states, the Tsardom of Russia and the Russian Empire, conquered it during the 16th...
, whose basin covers parts of the Sakha Republic, Chukotka Autonomous Okrug
Chukotka Autonomous Okrug
Chukotka Autonomous Okrug , or Chukotka , is a federal subject of Russia located in the Russian Far East.Chukotka has a population of 53,824 according to the 2002 Census, and a surface area of . The principal town and the administrative center is Anadyr...
, and Magadan Oblast
Magadan Oblast
Magadan Oblast is a federal subject of Russia in the Far Eastern Federal District. Its administrative center is the city of Magadan....
of Russia
Russia
Russia or , officially known as both Russia and the Russian Federation , is a country in northern Eurasia. It is a federal semi-presidential republic, comprising 83 federal subjects...
. It
rises in the mountains north of Okhotsk
Okhotsk
Okhotsk is an urban locality and a seaport at the mouth of the Okhota River on the Sea of Okhotsk, in Okhotsky District, Khabarovsk Krai, Russia. Population: 4,470 ;...
and Magadan
Magadan
Magadan is a port town on the Sea of Okhotsk and gateway to the Kolyma region. It is the administrative center of Magadan Oblast , in the Russian Far East. Founded in 1929 on the site of an earlier settlement from the 1920s, it was granted the status of town in 1939...
, in the area of 62°N 149°E and
empties into the Kolyma Gulf
Kolyma Gulf
The Kolyma Gulf is the largest gulf of the East Siberian Sea...
(Kolymskiy Zaliv) of the East Siberian Sea
East Siberian Sea
The East Siberian Sea is a marginal sea in the Arctic Ocean. It is located between the Arctic Cape to the north, the coast of Siberia to the south, the New Siberian Islands to the west and Cape Billings, close to Chukotka, and Wrangel Island to the east...
, a division of the Arctic Ocean
Arctic Ocean
The Arctic Ocean, located in the Northern Hemisphere and mostly in the Arctic north polar region, is the smallest and shallowest of the world's five major oceanic divisions...
, at 69°30′N 161°30′E. The Kolyma is 2129 kilometres (1,322.9 mi) long. The area of its basin is 644,000 km².

The Kolyma is frozen to depths of several metres for about 250 days each year, becoming free of ice only in early June, until October.

In 1640 Dimitry Zyryan (also called Yarilo or Yerilo) went overland to the Indigirka
Indigirka River
The Indigirka River is a river in the Sakha Republic in Russia between the Yana River and the Kolyma River. It is in length. The area of its basin is 360,000 km²...
. In 1641 he sailed down the Indigirka, went east and up the Alazeya. Here they heard of the Kolyma and met Chukchis
Chukchi people
The Chukchi, or Chukchee , ) are an indigenous people inhabiting the Chukchi Peninsula and the shores of the Chukchi Sea and the Bering Sea region of the Arctic Ocean within the Russian Federation. They speak the Chukchi language...
for the first time. In 1643 he returned to the Indigirka, sent his yasak to Yakutsk and went back to the Alazeya. In 1645 he returned to the Lena
Lena River
The Lena is the easternmost of the three great Siberian rivers that flow into the Arctic Ocean . It is the 11th longest river in the world and has the 9th largest watershed...
where he met a party and learned that he had been appointed prekazshchik of the Kolyma. He returned east and died in early 1646. In the winter of 1641-42 Mikhail Stadukhin
Mikhail Stadukhin
Mikhail Vasilyevich Stadukhin was a Russian explorer of far northeast Siberia, one of the first to reach the Kolyma, Anadyr, Penzhina and Gizhiga Rivers and the northern Sea of Okhotsk. He was a Pomor, probably born in the village of Pinega, and the nephew of a Moscow merchant...
, accompanied by Semyon Dezhnyov, went overland to the upper Indigirka. He spent the next winter there, built boats and sailed down the Indigirka and east to the Alazeya where he met Zyryan. Zyrian and Dezhnev stayed at the Alazeya, while Stadukhin went east, reaching the Kolyma in the summer of 1644. They built a zimovye, probably at Srednekolymsk
Srednekolymsk
Srednekolymsk is a town and the administrative center of Srednekolymsky District of the Sakha Republic, Russia, located northeast of Yakutsk on the left bank of the Kolyma River. Population: -History:...
and returned to Yakutsk in late 1645.

In 1892-1894 Baron Eduard Von Toll carried out geological surveys in the basin of the Kolyma (among other Far-eastern Siberian rivers) on behalf of the Russian Academy of Sciences (Barr, 1980). During one year and two days the expedition covered 25,000 km, of which 4,200 km were up rivers, carrying out geodesic surveys en route.

The Kolyma is known for its Gulag
Gulag
The Gulag was the government agency that administered the main Soviet forced labor camp systems. While the camps housed a wide range of convicts, from petty criminals to political prisoners, large numbers were convicted by simplified procedures, such as NKVD troikas and other instruments of...
labour camps and gold mining
Gold mining
Gold mining is the removal of gold from the ground. There are several techniques and processes by which gold may be extracted from the earth.-History:...
, both of which have been extensively documented since Joseph Stalin
Joseph Stalin
Joseph Vissarionovich Stalin was the Premier of the Soviet Union from 6 May 1941 to 5 March 1953. He was among the Bolshevik revolutionaries who brought about the October Revolution and had held the position of first General Secretary of the Communist Party of the Soviet Union's Central Committee...
era Soviet archives opened. The river gives its title to a famous anthology about life in Gulag camps by Varlam Shalamov
Varlam Shalamov
Varlam Tikhonovich Shalamov , baptized as Varlaam, was a Russian writer, journalist, poet and Gulag survivor.-Early life:Varlam Shalamov was born in Vologda, Vologda Governorate, a Russian city with a rich culture famous for its wooden architecture, to a family of a hereditary Russian Orthodox...
, The Kolyma Tales
The Kolyma Tales
Kolyma Tales is a collection of short stories by Russian author Varlam Shalamov, about labour camp life in the Soviet Union. He began working on this book in 1954 and continued until 1973.-Background:...
.

After the camps were closed, state subsidies, local industries and communication have dwindled to almost nothing. Many people have migrated, but those who remain in the area make a living by fishing and hunting.


Mouths of the Kolyma

In the last 75 km stretch the Kolyma divides into two large branches. There are many islands at the mouth of the Kolyma before it meets the East Siberian sea. The main ones are: