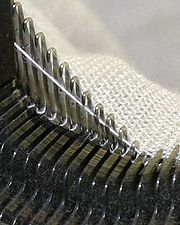 A knitting machine is a device used to create knitted
Knitting
Knitting is a method by which thread or yarn may be turned into cloth or other fine crafts. Knitted fabric consists of consecutive rows of loops, called stitches. As each row progresses, a new loop is pulled through an existing loop. The active stitches are held on a needle until another loop can...
fabric
Fabric
A fabric is a textile material, short for "textile fabric".Fabric may also refer to:*Fabric , the spatial and geometric configuration of elements within a rock*Fabric , a nightclub in London, England...
s in a semi- or fully automated fashion.

There are numerous types of knitting machines, ranging from the simple, non-mechanical, to the highly complex and electronic. All, however, produce various types of knitted fabrics, usually either flat or tubular, and of varying degrees of complexity. Pattern stitch
Stitch (textile arts)
In the textile arts, a stitch is a single turn or loop of thread or yarn. Stitches are the fundamental elements of sewing, knitting, embroidery, crochet, and needle lace-making, whether by hand or machine...
es can be selected by hand manipulation of the needles
Knitting needle
A knitting needle or knitting pin is a tool in hand-knitting to produce knitted fabrics. They generally have a long shaft and taper at their end, but they are not nearly as sharp as sewing needles. Their purpose is two-fold...
, or with push-buttons and dials, mechanical punch card
Punched card
A punched card, punch card, IBM card, or Hollerith card is a piece of stiff paper that contains digital information represented by the presence or absence of holes in predefined positions...
s, or electronic pattern reading devices and computers.

A few simple devices permit knitting without needles for toy or hobby purposes. The simplest of these is spool knitting
Spool knitting
Spool knitting, corking, or French knitting is a form of knitting that uses a spool and four nails to produce a narrow tube of fabric. Spool knitting is a traditional way to teach children the basic principles of knitting....
, followed by knitting boards or knitting looms, which consist of two rows of pins mounted in two parallel rows approximately 0.5 inches (1.3 cm) apart. Yarn
Yarn
Yarn is a long continuous length of interlocked fibres, suitable for use in the production of textiles, sewing, crocheting, knitting, weaving, embroidery and ropemaking. Thread is a type of yarn intended for sewing by hand or machine. Modern manufactured sewing threads may be finished with wax or...
is wound around the pins; various patterns of winding produce different textured knitting. A needle or special tool is then used to transfer the loops of yarn from around the pins, either off the pins or to other pins, to produce the knitting. Knitting boards can produce complex designs. Other semi-mechanical knitting devices are available.

To produce larger and more complex knitted items such as garments, domestic and industrial machines, with either flat or circular beds that produce rectangular or tubular fabrics are needed. Double bed machines have two flat beds facing each other, in order to produce purl and plain rib fabrics plus a variety of multi patterns. Ribbing
Ribbing (knitting)
In knitting, ribbing is a pattern in which vertical stripes of stockinette stitch alternate with vertical stripes of reverse stockinette stitch...
attachments can be added to single bed machines to achieve a similar result.

Late 20th century domestic/studio models typically use up to 200 latch-hook needles to hold the stitches in fine, standard, mid-gauge or bulky gauge needle. A carriage or cam box is passed across the bed of needles causing the needle movements required to produce each next stitch. By means of various selection methods, e.g. punch cards, particular needles can be caused to travel by alternate pathways through the cam box. Thus needles will knit or not, and the unknitted yarn portions will lie under (slip stitch) or over the needle or be held in the needle hook (tuck stitch). Needles can be placed in holding position to allow short row shaping. In the most modern machines, punchcards have been replaced by computer control.

Automatic patterning machines can knit two-colour Fair Isle patterns
Fair Isle (technique)
thumb|Fair Isle [[sweater|jumper]] done in the traditional style, from Fair Isle.Fair Isle is a traditional knitting technique used to create patterns with multiple colours. It is named after Fair Isle, a tiny island in the north of Scotland, that forms part of the Shetland islands...
automatically, and have machine stitch patterning features such as plating and knitweaving. Plating refers to knitting with two strands of yarn that are held in such a way that one is in front of the other. Plated effects can be particularly striking in a ribbed fabric. Knitweaving refers to a technique in which a separate piece of yarn, often heavier than the knitted fabric, is carried along and caught between stitches to produce an effect like weaving. With knitwoven fabric, the purl side (usually the wrong side) is the right side of the fabric. The fine and standard gauge models have the option of a lace carriage, where stitches can be transferred from one needle to the next. The yarn passes through a tensioning mechanism and down through the knit carriage, which feeds the yarn to the needles as they knit.

Domestic knitting machines use the weft knitting method which produces a fabric similar to hand knitting
Knitting
Knitting is a method by which thread or yarn may be turned into cloth or other fine crafts. Knitted fabric consists of consecutive rows of loops, called stitches. As each row progresses, a new loop is pulled through an existing loop. The active stitches are held on a needle until another loop can...
. Knitting proceeds more quickly than in hand knitting, where (usually two) straight needles
Knitting needle
A knitting needle or knitting pin is a tool in hand-knitting to produce knitted fabrics. They generally have a long shaft and taper at their end, but they are not nearly as sharp as sewing needles. Their purpose is two-fold...
are held in the hand and each stitch is manipulated individually across the row. Knitting machines work an entire row of loops in a single movement.

Machine knitting is also a very popular hobby in many western countries and has spawned its own 'anti-heroine', Hilda Hopkins. Hopkins, a 55+ divorcee, is a machine knitting serial killer who makes knitted doll like effigies of her victims. Always staying one step ahead of the police, her love of machine knitting competitions and conventions is too often the cause of her downfall, recapture and subsequent need to escape once more. The dowdy old knitter has generated something of a cult following among machine knitting social circles both on and off the internet.

The fabric produced using a knitting machine is of a more even texture than hand-knitted fabric, which is particularly noticeable on large areas of plain stockinette stitch, and can be an advantage. Some stitch patterns (e.g., tuck stitches) are much easier to produce with a knitting machine. Others (e.g. garter stitch) can also be produced with machine knitting but can take a little longer but still much faster than hand knitting. The standard gauge 200-needle machine can knit the finest yarns up to a good sport-weight, while the heavier yarns knit better on a mid-gauge or bulky knitting machine.

Machine knitting saves a considerable amount of time but does require learning to operate the machines correctly. Most if not all hand knitting patterns can be worked up on a machine, either identically or in a similar design.