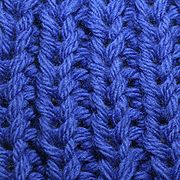 The number of knit and purl stripes (wales) are generally equal, although they need not be. When they are equal, the fabric
Fabric
A fabric is a textile material, short for "textile fabric".Fabric may also refer to:*Fabric , the spatial and geometric configuration of elements within a rock*Fabric , a nightclub in London, England...
has no tendency to curl, unlike stockinette stitch. Such ribbing looks the same on both sides and is useful for garments such as scarves.

Ribbing has a strong tendency to contract laterally, forming small pleat
Pleat
A pleat is a type of fold formed by doubling fabric back upon itself and securing it in place. It is commonly used in clothing and upholstery to gather a wide piece of fabric to a narrower circumference....
s in which the purl stitches recede and the knit stitches come forward. Thus, ribbing is often used for cuff
Cuff
A cuff is an extra layer of fabric at the lower edge of the sleeve of a garment covering the arms. In US usage the word may also refer to the end of the leg of a pair of trousers...
s, sweater
Sweater
A sweater, jumper, pullover, sweatshirt, jersey or guernsey is a garment intended to cover the torso and arms. It is often worn over a shirt, blouse, T-shirt, or other top, but may also be worn alone as a top...
hem
Hem
To hem a piece of cloth is to sew a cut edge in such a way as to prevent unraveling of the fabric.There are many different styles of hems of varying complexities. The most common hem...
s and, more generally, any edge that should be form-fitting. The elasticity depends on the number of knit/purl transitions; 1x1 ribbing is more elastic than 2x2 ribbing, etc.
However, some cable patterns may "pull in" more than ribbing (i.e., have a smaller gauge
Gauge (knitting)
In knitting, the word gauge is used both in hand knitting and machine knitting; the latter, technical abbreviation GG, refers to "Knitting Machines" fineness size. In both cases, the term refers to the number of stitches per inch, not the size of the finished garment...
); in such cases, a ribbed border may flare out instead of contracting.

Slip stitch
Slip-stitch knitting
Slip-stitch knitting is a family of knitting techniques that use slip stitches to make multiple fabrics simultaneously, to make extra-long stitches, and/or to carry over colors from an earlier row.-Basic methods:...
es may be added to increase the depth of the ribbing, and to accentuate the stitches of certain wales. For example, the knit stitches can be slipped every other row to double their height and make them come forward.

Ribs can be decorated with nearly any motif used for a plain knitted fabric, e.g., bobbles
Bobble (knitting)
In knitting, a bobble is a localized set of stitches forming a raised bump. The bumps are usually arranged in a regular geometrical pattern or may be figurative, e.g., represent apples on a knitted tree....
, cables
Cable knitting
Cable knitting is a style of knitting in which textures of crossing layers are achieved by permuting stitches. For example, given four stitches appearing on the needle in the order ABCD, one might cross the first two the next two, so that in subsequent rows those stitches appear in the new order...
, lace
Lace knitting
Lace knitting is a style of knitting characterized by stable "holes" in the fabric arranged with consideration of aesthetic value. Lace is sometimes considered the pinnacle of knitting, because of its complexity and because woven fabrics cannot easily be made to have holes...
, various color
Color
Color or colour is the visual perceptual property corresponding in humans to the categories called red, green, blue and others. Color derives from the spectrum of light interacting in the eye with the spectral sensitivities of the light receptors...
s, and so on.
The source of this article is wikipedia, the free encyclopedia.  The text of this article is licensed under the GFDL.