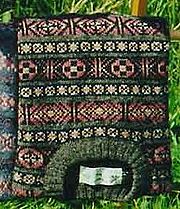 Fair Isle is a traditional knitting
Knitting
Knitting is a method by which thread or yarn may be turned into cloth or other fine crafts. Knitted fabric consists of consecutive rows of loops, called stitches. As each row progresses, a new loop is pulled through an existing loop. The active stitches are held on a needle until another loop can...
technique used to create patterns with multiple colours. It is named after Fair Isle
Fair Isle
Fair Isle is an island in northern Scotland, lying around halfway between mainland Shetland and the Orkney islands. It is famous for its bird observatory and a traditional style of knitting.-Geography:...
, a tiny island in the north of Scotland
Scotland
Scotland is a country that is part of the United Kingdom. Occupying the northern third of the island of Great Britain, it shares a border with England to the south and is bounded by the North Sea to the east, the Atlantic Ocean to the north and west, and the North Channel and Irish Sea to the...
, that forms part of the Shetland
Shetland Islands
Shetland is a subarctic archipelago of Scotland that lies north and east of mainland Great Britain. The islands lie some to the northeast of Orkney and southeast of the Faroe Islands and form part of the division between the Atlantic Ocean to the west and the North Sea to the east. The total...
islands. Fair Isle knitting gained a considerable popularity when the Prince of Wales (later to become Edward VIII) wore Fair Isle tank tops in public in 1921. Traditional Fair Isle patterns have a limited palette of five or so colours, use only two colours per row, are worked in the round, and limit the length of a run of any particular colour.

Other techniques for knitting in colour include intarsia
Intarsia (knitting)
Intarsia is a knitting technique used to create patterns with multiple colours. As with the woodworking technique of the same name, fields of different colours and materials appear to be inlaid in one another, but are in fact all separate pieces, fit together like a jigsaw puzzle.Unlike other...
, slip-stitch colour
Slip-stitch knitting
Slip-stitch knitting is a family of knitting techniques that use slip stitches to make multiple fabrics simultaneously, to make extra-long stitches, and/or to carry over colors from an earlier row.-Basic methods:...
(also known as mosaic knitting).

Basic two-colour Fair Isle requires no new techniques beyond the basic knit stitch. (The purl stitch is not used.) At each knit stitch, there are two available "active" colours of yarn; one is drawn through to make the knit stitch, and the other is simply held behind the piece, carried as a loose strand of yarn behind the just-made stitch. Knitters who are comfortable with both English
English knitting
English knitting, also known as right-hand knitting or throwing, is a style of Western knitting where the yarn to be knit into the fabric is carried in the right hand...
style and Continental style knitting can carry one colour with their right hand and one with their left, which is probably easiest, although it is also possible to simply use two different fingers for the two colours of yarn and knit both using the same style.

Traditional Fair Isle patterns normally had no more than two or three consecutive stitches of any given colour, because they were stranded, and too many consecutive stitches of one colour means a very long strand of the other, quite easy to catch with a finger or button. A more modern variation is woven Fair Isle, where the unused strand is held in slightly different positions relative to the needles and thereby woven into the fabric, still invisible from the front, but trapped closely against the back of the piece. This permits a nearly limitless variety of patterns with considerably larger blocks of colour.

Traditional Fair Isle sweater construction usually involves knitting the body of the sweater in the round
Circular knitting
Circular knitting or knitting in the round is a form of knitting that creates a seamless tube. When knitting circularly, the knitting is cast on and the circle of stitches is joined. Knitting is worked in rounds in a spiral. Originally, circular knitting was done using a set of four or five...
, sewing or otherwise fastening the work securely where the arm holes are to go, and then cutting the knit fabric to make the armholes. These cuts are known as steek
Steek
In knitting, steeking is a shortcut used to knit garments such as sweaters in the round without interruption for openings or sleeves until the end. After completing a tube, a straight line is cut along the center of a column of stitches, in order to make room for an opening or place to attach...
s in American knitting terminology, but not in the Shetland Isles where the Fair Isle technique was developed.

Beginning in the 1990s, the term "Fair Isle" has been applied very generally and loosely to any stranded color knitting which has no relation to the knitting of Fair Isle or any of the other Shetland Islands.