Kneepads or knee pads are protective gear worn on knee
Knee
The knee joint joins the thigh with the leg and consists of two articulations: one between the fibula and tibia, and one between the femur and patella. It is the largest joint in the human body and is very complicated. The knee is a mobile trocho-ginglymus , which permits flexion and extension as...
s to protect them against impact injury
Injury
-By cause:*Traumatic injury, a body wound or shock produced by sudden physical injury, as from violence or accident*Other injuries from external physical causes, such as radiation injury, burn injury or frostbite*Injury from infection...
during , e.g., a fall or a strike, or to provide padding for extended kneeling. 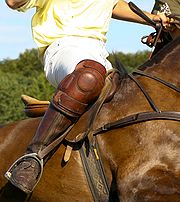 
In trades and military use

Kneepads are also used in various trades, for the home handyman
Handyman
A handyman is a person skilled at a wide range of repairs, typically around the home. These tasks include trade skills, repair work, maintenance work, both interior and exterior, and are sometimes described as "odd jobs", "fix-up tasks", and include light plumbing jobs such as fixing a leaky toilet...
, for police
Police
The police is a personification of the state designated to put in practice the enforced law, protect property and reduce civil disorder in civilian matters. Their powers include the legitimized use of force...
SWAT teams, are incorporated into military uniform
Military uniform
Military uniforms comprises standardised dress worn by members of the armed forces and paramilitaries of various nations. Military dress and military styles have gone through great changes over the centuries from colourful and elaborate to extremely utilitarian...
s such as the Army Combat Uniform
Army Combat Uniform
The Army Combat Uniform is the current combat uniform worn by the United States Army. It is the successor to the Battle Dress Uniform and Desert Camouflage Uniform worn during the 1980s and 1990s. It features a number of design changes, as well as a different camouflage pattern from its...
and the Marine Corps Combat Utility Uniform
Marine Corps Combat Utility Uniform
The Marine Corps Combat Utility Uniform is the current battledress uniform of the United States Marine Corps. It is also worn by Navy personnel assigned to Marine Corps units . Field testing began in 2001, the uniform debuted in 2002, and the changeover was completed in October 2004...
. These kneepads are generally designed differently than the general all round high impact kneepads made for sports.
The source of this article is wikipedia, the free encyclopedia.  The text of this article is licensed under the GFDL.