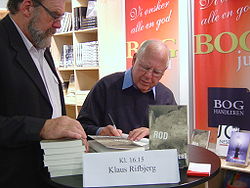 Klaus Rifbjerg is a Danish
Denmark
Denmark is a Scandinavian country in Northern Europe. The countries of Denmark and Greenland, as well as the Faroe Islands, constitute the Kingdom of Denmark . It is the southernmost of the Nordic countries, southwest of Sweden and south of Norway, and bordered to the south by Germany. Denmark...
writer
Writer
A writer is a person who produces literature, such as novels, short stories, plays, screenplays, poetry, or other literary art. Skilled writers are able to use language to portray ideas and images....
. He has written more than 170 novels, books and essays.

Rifbjerg was born in Copenhagen
Copenhagen
Copenhagen is the capital and largest city of Denmark, with an urban population of 1,199,224 and a metropolitan population of 1,930,260 . With the completion of the transnational Øresund Bridge in 2000, Copenhagen has become the centre of the increasingly integrating Øresund Region...
and grew up on the island of Amager
Amager
Amager is a Danish island in the Øresund. The Danish capital, Copenhagen, is partly situated on Amager, which is connected to the much larger island of Zealand by five bridges.-History:...
, a part of the city, the child of two teachers. Later he studied English and literature, in Copenhagen and for a year in the United States
United States
The United States of America is a federal constitutional republic comprising fifty states and a federal district...
at Princeton University
Princeton University
Princeton University is a private research university located in Princeton, New Jersey, United States. The school is one of the eight universities of the Ivy League, and is one of the nine Colonial Colleges founded before the American Revolution....
.

His breakthrough was in 1958 with the novel Den kroniske Uskyld. It was made into a film in 1985, directed by Edward Fleming. Since then he has published more than 100 novels as well as poetry and short story collections, plays, TV and radio plays, film scripts, children's books, and diaries.

Rifbjerg is also known as a journalist
Journalist
A journalist collects and distributes news and other information. A journalist's work is referred to as journalism.A reporter is a type of journalist who researchs, writes, and reports on information to be presented in mass media, including print media , electronic media , and digital media A...
and critic
Critic
A critic is anyone who expresses a value judgement. Informally, criticism is a common aspect of all human expression and need not necessarily imply skilled or accurate expressions of judgement. Critical judgements, good or bad, may be positive , negative , or balanced...
. Along with Villy Sørensen
Villy Sørensen
Villy Sørensen was a Danish short-story writer, philosopher and literary critic of the Modernist tradition. His fiction was heavily influenced by his philosophical ideas, and he has been compared to Franz Kafka in this regard...
, he was editor of the publication Vindrosen, and from 1984 to 1991 he was the literary director of Gyldendal
Gyldendal (Denmark)
Gyldendalske Boghandel, Nordisk Forlag A/S, in Denmark usually referred to simply as Gyldendal is a Danish publishing house. Founded in 1770 by Søren Gyldendal, it is the oldest and largest publishing house in Denmark, offering a wide selection of books including fiction, non-fiction and...
.

Among other honors, he was awarded the Nordic Prize of the Swedish Academy
Swedish Academy
The Swedish Academy , founded in 1786 by King Gustav III, is one of the Royal Academies of Sweden.-History:The Swedish Academy was founded in 1786 by King Gustav III. Modelled after the Académie française, it has 18 members. The motto of the Academy is "Talent and Taste"...
(1999), The Nordic Council's Literature Prize
The Nordic Council's Literature Prize
The Nordic Council Literature Prize is awarded for a work of literature written in one of the languages of the Nordic countries, that meets "high literary and artistic standards". Established in 1962, the prize is awarded every year, and is worth 350,000 Danish kroner...
, and the grand prize of the Danish Academy
Danish Academy
Danish Academy is an independent organisation founded in 1960 by a circle of Danish intellectuals "to promote Danish esprit and language, especially within the field of literature". It has up to 20 members, currently 18, and is based at Rungstedlund, the former home of author Karen Blixen who was...
.

He has been seen as the first true modernist author in Danish, being increasingly more experimental though the 1960s, culminating with "Anna (jeg) Anna". Much of the works from 1970 and some twentyfive years on is loser in scope and composition, often humorous or sarcastic, often leaving the protagonist chaotically alone with his og her existential and psychological hangups, suptly exemplifying modernism as the breakdown of the normality of the bourguoisy. A principal theme is the portrayal of children and their difficulties establishing their own identity. The works in the 2000s opens a new line of inspiration: Historic events.