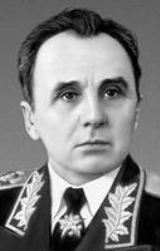 Moskalenko was born in the village of Grishino, near Donetsk
Donetsk
Donetsk , is a large city in eastern Ukraine on the Kalmius river. Administratively, it is a center of Donetsk Oblast, while historically, it is the unofficial capital and largest city of the economic and cultural Donets Basin region...
in Ukraine. He attended a number of military academies and joined the Red Army
Red Army
The Workers' and Peasants' Red Army started out as the Soviet Union's revolutionary communist combat groups during the Russian Civil War of 1918-1922. It grew into the national army of the Soviet Union. By the 1930s the Red Army was among the largest armies in history.The "Red Army" name refers to...
in 1920 and fought on various fronts during the Russian Civil War. During the Soviet-Finnish War, he was the commander of artillery for the 51st Rifle Division.

When Operation Barbarossa
Operation Barbarossa
Operation Barbarossa was the code name for Germany's invasion of the Soviet Union during World War II that began on 22 June 1941. Over 4.5 million troops of the Axis powers invaded the USSR along a front., the largest invasion in the history of warfare...
began in June 1941, Moskalenko was the commander of an anti-tank brigade. Between June, 1941, and March, 1942, Moskalenko first held command of the 1st Anti-Tank Brigade, 15th Rifle Corps, 6th Army
6th Army (Soviet Union)
The 6th Army was a field army of the Soviet Red Army formed four times during World War II and active with the Russian Ground Forces up until 1998...
, and later of the 6th Cavalry Corps. He was the commander of the newly reformed 38th Army from March to July, 1942. He was then appointed commander of the 1st Tank Army (July–August 1942) and the 1st Guards Army (August–October 1942) before finally receiving command of the 40th Army
40th Army (Soviet Union)
The 40th Army of the Soviet Union's Red Army was an army-level command active from 1941 to 1945 and then again from 1979 to circa 1990.It was first formed, after Operation Barbarossa, the German invasion of the Soviet Union, had commenced, from elements of the 26th and 37th Armies under the command...
, which was separate from the Voronezh Front
Voronezh Front
The Voronezh Front was a front of the Soviet Union's Red Army during the Second World War. The name indicated the primary geographical region in which the Front first fought, based on the town of Voronezh on the Don River....
, a position he held until October, 1943. Moskalenko led his troops during the winter counteroffensive and during the Battle of Kursk
Battle of Kursk
The Battle of Kursk took place when German and Soviet forces confronted each other on the Eastern Front during World War II in the vicinity of the city of Kursk, in the Soviet Union in July and August 1943. It remains both the largest series of armored clashes, including the Battle of Prokhorovka,...
. Because of his contributions to a large number of key battles, such as Moscow
Battle of Moscow
The Battle of Moscow is the name given by Soviet historians to two periods of strategically significant fighting on a sector of the Eastern Front during World War II. It took place between October 1941 and January 1942. The Soviet defensive effort frustrated Hitler's attack on Moscow, capital of...
, Stalingrad
Battle of Stalingrad
The Battle of Stalingrad was a major battle of World War II in which Nazi Germany and its allies fought the Soviet Union for control of the city of Stalingrad in southwestern Russia. The battle took place between 23 August 1942 and 2 February 1943...
, and Kursk, Moskalenko was given the rank of Hero of the Soviet Union
Hero of the Soviet Union
The title Hero of the Soviet Union was the highest distinction in the Soviet Union, awarded personally or collectively for heroic feats in service to the Soviet state and society.-Overview:...
.

From October 1943 until the end of the war, Moskalenko was the commander of the 38th Army
38th Army (Soviet Union)
The 38th Red Banner Army of was a field army of the Soviet Union that existed between 1941 and 1991.The army headquarters was formed in July 1941 by redesignation of the staff of 8th Mechanised Corps.On 1 May 1945, the army was part of 4th Ukrainian Front...
. He led his troops as they helped drive the Germans
Germany
Germany , officially the Federal Republic of Germany , is a federal parliamentary republic in Europe. The country consists of 16 states while the capital and largest city is Berlin. Germany covers an area of 357,021 km2 and has a largely temperate seasonal climate...
from the Ukraine
Ukraine
Ukraine is a country in Eastern Europe. It has an area of 603,628 km², making it the second largest contiguous country on the European continent, after Russia...
, Poland, and Czechoslovakia
Czechoslovakia
Czechoslovakia or Czecho-Slovakia was a sovereign state in Central Europe which existed from October 1918, when it declared its independence from the Austro-Hungarian Empire, until 1992...
.

On July 25, 1953, Khrushchev
Nikita Khrushchev
Nikita Sergeyevich Khrushchev led the Soviet Union during part of the Cold War. He served as First Secretary of the Communist Party of the Soviet Union from 1953 to 1964, and as Chairman of the Council of Ministers, or Premier, from 1958 to 1964...
secretly asked him to arrest Beria
Lavrentiy Beria
Lavrentiy Pavlovich Beria was a Georgian Soviet politician and state security administrator, chief of the Soviet security and secret police apparatus under Joseph Stalin during World War II, and Deputy Premier in the postwar years ....
, which was done the next day during a Presidium meeting with the help of Marshal Zhukov
Georgy Zhukov
Marshal of the Soviet Union Georgy Konstantinovich Zhukov , was a Russian career officer in the Red Army who, in the course of World War II, played a pivotal role in leading the Red Army through much of Eastern Europe to liberate the Soviet Union and other nations from the Axis Powers' occupation...
. Because of the fear that the Soviet government had about the rising popularity of Zhukov, he could not carry a gun into the Kremlin
Kremlin
A kremlin , same root as in kremen is a major fortified central complex found in historic Russian cities. This word is often used to refer to the best-known one, the Moscow Kremlin, or metonymically to the government that is based there...
. Moskalenko sneaked into the Kremlin with the gun to arrest Beria. During the next six months, he and Rudenko investigated the "Beria Case". In December, 1953, the Soviet Supreme court found Beria guilty, after a five-day proceeding. On December 23, Beria was shot.