Encyclopedia
In kinetic resolution, two enantiomer
Enantiomer
In chemistry, an enantiomer is one of two stereoisomers that are mirror images of each other that are non-superposable , much as one's left and right hands are the same except for opposite orientation. It can be clearly understood if you try to place your hands one over the other without...
s show different reaction rate
Reaction rate
The reaction rate or speed of reaction for a reactant or product in a particular reaction is intuitively defined as how fast or slow a reaction takes place...
s in a chemical reaction
Chemical reaction
A chemical reaction is a process that leads to the transformation of one set of chemical substances to another. Chemical reactions can be either spontaneous, requiring no input of energy, or non-spontaneous, typically following the input of some type of energy, such as heat, light or electricity...
, thereby creating an excess of the less reactive enantiomer. This excess goes through a maximum and disappears on full completion of the reaction. Kinetic resolution is a very old concept in organic chemistry
Organic chemistry
Organic chemistry is a subdiscipline within chemistry involving the scientific study of the structure, properties, composition, reactions, and preparation of carbon-based compounds, hydrocarbons, and their derivatives...
and can be used in the organic synthesis
Organic synthesis
Organic synthesis is a special branch of chemical synthesis and is concerned with the construction of organic compounds via organic reactions. Organic molecules can often contain a higher level of complexity compared to purely inorganic compounds, so the synthesis of organic compounds has...
of chiral molecules. It has been surpassed by other methods.

Kinetic resolution was first observed by Marckwald and McKenzie in 1899 in the esterification reaction of racemic
Racemic
In chemistry, a racemic mixture, or racemate , is one that has equal amounts of left- and right-handed enantiomers of a chiral molecule. The first known racemic mixture was "racemic acid", which Louis Pasteur found to be a mixture of the two enantiomeric isomers of tartaric acid.- Nomenclature :A...
mandelic acid
Mandelic acid
Mandelic acid is an aromatic alpha hydroxy acid with the molecular formula C6H5CHCO2H. It is a white crystalline solid that is soluble in water and polar organic solvents. It is a useful precursor to various drugs...
with optically active (-)-menthol
Menthol
Menthol is an organic compound made synthetically or obtained from peppermint or other mint oils. It is a waxy, crystalline substance, clear or white in color, which is solid at room temperature and melts slightly above. The main form of menthol occurring in nature is -menthol, which is assigned...
to a pair of diastereomer
Diastereomer
Diastereomers are stereoisomers that are not enantiomers.Diastereomerism occurs when two or more stereoisomers of a compound have different configurations at one or more of the equivalent stereocenters and are not mirror images of each other.When two diastereoisomers differ from each other at...
ic esters. 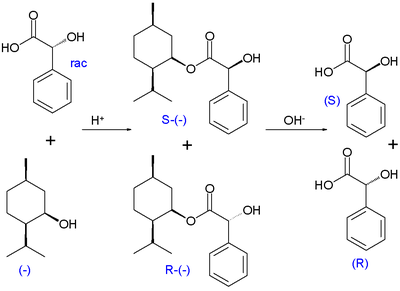 Dynamic kinetic resolution (DKR) is when the starting material can racemise under the reaction conditions, since this process is an equilibrium, with the faster reacting enantiomer being continually removed from the system, the major product of the reaction can exceed the previous maximum yield of 50%. DKR provides the possibility of up to 100% yield, provided the racemisation is much faster than the irreversible reaction. The observed dynamics are based on the Curtin-Hammett principle
Curtin-Hammett principle
The Curtin–Hammett principle is a principle in chemical kinetics proposed by David Yarrow Curtin and Louis Plack Hammett. It states that, for a reaction that has a pair of reactive intermediates or reactants that interconvert rapidly , each going irreversibly to a different product, the product...
. In order to distinguish this process from classic resolution (which strictly speaking it is not), the term dynamic kinetic asymmetric transformation (DYKAT) has been introduced. 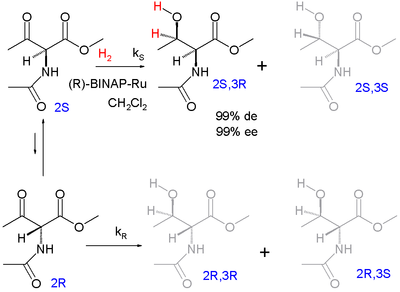 The enantiomers interconvert through their common enol
Enol
Enols are alkenes with a hydroxyl group affixed to one of the carbon atoms composing the double bond. Alkenes with a hydroxyl group on both sides of the double bond are called enediols. Deprotonated anions of enols are called enolates...
. The ultimate reaction product is the protected syn adduct
Syn addition
In organic chemistry, syn and anti addition are different ways in which two substituents can be added to a double bond or triple bond. This article will use alkenes as examples....
l-threonine
Threonine
Threonine is an α-amino acid with the chemical formula HO2CCHCHCH3. Its codons are ACU, ACA, ACC, and ACG. This essential amino acid is classified as polar...
(2S,3R) with 99% diastereomeric excess (preference for the syn diastereomeric pair and not the anti pair) and 99% enantiomeric excess
Enantiomeric excess
The enantiomeric excess of a substance is a measure of how pure it is. In this case, the impurity is the undesired enantiomer .-Definition:...
(preference for 3R product within the syn pair).

One study examined the biocatalytic
Biocatalysis
Biocatalysis is the use of natural catalysts, such as protein enzymes, to perform chemical transformations on organic compounds. Both enzymes that have been more or less isolated and enzymes still residing inside living cells are employed for this task....
acetylation
Acetylation
Acetylation describes a reaction that introduces an acetyl functional group into a chemical compound...
of a racemic 8-aminotetrahydroquinoline 1 with Candida antarctica
Candida (genus)
Candida is a genus of yeasts. Many species are harmless commensals or endosymbionts of animal hosts including humans, but other species, or harmless species in the wrong location, can cause disease. Candida albicans can cause infections in humans and other animals, especially in immunocompromised...
Lipase B: 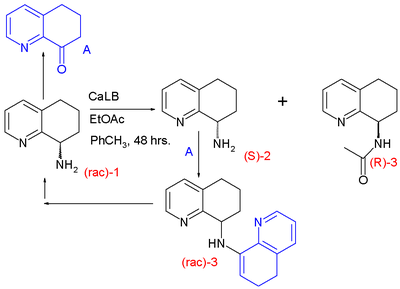 The enzyme
Enzyme
Enzymes are proteins that catalyze chemical reactions. In enzymatic reactions, the molecules at the beginning of the process, called substrates, are converted into different molecules, called products. Almost all chemical reactions in a biological cell need enzymes in order to occur at rates...
only converts the R-enantiomer and, in regular kinetic resolution, a 50:50 mixture of retained (S)-amine 2 and (R)-acetamide 3 is obtained. However, the amine is racemized, thus increasing the yield of the acetamide beyond 50% and turning the process into a DKR one. The compound believed to be responsible for the racemization path is the ketone
Ketone
In organic chemistry, a ketone is an organic compound with the structure RCR', where R and R' can be a variety of atoms and groups of atoms. It features a carbonyl group bonded to two other carbon atoms. Many ketones are known and many are of great importance in industry and in biology...
A, formed in catalytic quantities from the amine by action of the same enzyme and a catalytic amount of water. The ketone is able to form the racemic enamine
Enamine
An enamine is an unsaturated compound derived by the reaction of an aldehyde or ketone with a secondary amine followed by loss of H2O.The word "enamine" is derived from the affix en-, used as the suffix of alkene, and the root amine. This can be compared with enol, which is a functional group...
3 which can be hydrolyzed back to the amine.

In a second manifestation of the DKR method, both enantiomers of a racemic pair form a prochiral
Prochiral
In stereochemistry, prochiral molecules are those that can be converted from achiral to chiral in a single step.If two identical substituents are attached to a sp3-hybridized atom, the descriptors pro-R and pro-S are used to distinguish between the two...
intermediate or a meso compound
Meso compound
A meso compound or meso isomer is a non-optically active member of a set of stereoisomers, at least two of which are optically active. This means that despite containing two or more stereocenters it is not chiral. A meso compound is superimposable on its mirror image, and it does not produce a ""...
. An example is the allylic asymmetric alkylation depicted below, which proceeds through a pseudo-meso palladium-allyl complex.

Parallel kinetic resolution (PKR) is much the same as mutual kinetic resolution except that, instead of using two sets of racemates, only one set of racemates is used and resolved using a quasi-enantiomeric mixture of reagents (quasi-enantiomers are not strictly enantiomer
Enantiomer
In chemistry, an enantiomer is one of two stereoisomers that are mirror images of each other that are non-superposable , much as one's left and right hands are the same except for opposite orientation. It can be clearly understood if you try to place your hands one over the other without...
s, but they behave as if they are). This methodology is employed to achieve chromatographic isolation of the constituent stereoisomers with relative ease.