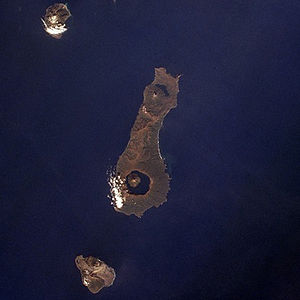 Kharimkotan; Japanese
Japanese language
is a language spoken by over 130 million people in Japan and in Japanese emigrant communities. It is a member of the Japonic language family, which has a number of proposed relationships with other languages, none of which has gained wide acceptance among historical linguists .Japanese is an...
春牟古丹島; Harimukotan-tō, alternatively Harumukotan-tō or 加林古丹; Karinkotan-tō) is an uninhabited volcanic island located 13 kilometres (8.1 mi) km from Onekotan
Onekotan
Onekotan Island is an uninhabited volcanic island located near the northern end of the Kuril Islands chain in the Sea of Okhotsk in the northwest Pacific Ocean. Its name is derived from the Ainu language for "large village".-Geology:...
near the northern end of the Kuril Islands
Kuril Islands
The Kuril Islands , in Russia's Sakhalin Oblast region, form a volcanic archipelago that stretches approximately northeast from Hokkaidō, Japan, to Kamchatka, Russia, separating the Sea of Okhotsk from the North Pacific Ocean. There are 56 islands and many more minor rocks. It consists of Greater...
chain in the Sea of Okhotsk
Sea of Okhotsk
The Sea of Okhotsk is a marginal sea of the western Pacific Ocean, lying between the Kamchatka Peninsula on the east, the Kuril Islands on the southeast, the island of Hokkaidō to the far south, the island of Sakhalin along the west, and a long stretch of eastern Siberian coast along the west and...
in the northwest Pacific Ocean
Pacific Ocean
The Pacific Ocean is the largest of the Earth's oceanic divisions. It extends from the Arctic in the north to the Southern Ocean in the south, bounded by Asia and Australia in the west, and the Americas in the east.At 165.2 million square kilometres in area, this largest division of the World...
. Its name is derived from the Ainu language
Ainu language
Ainu is one of the Ainu languages, spoken by members of the Ainu ethnic group on the northern Japanese island of Hokkaidō....
, from “village of many Cardiocrinum
Cardiocrinum
Cardiocrinum is a genus of three or four species of bulbous plants of the family Liliaceae. They are native to the Himalaya, montane China, and Japan. The bulbs are usually formed at the soil surface. The preferred habitat is woodland...
”.

The island consists of a dormant stratovolcano
Stratovolcano
A stratovolcano, also known as a composite volcano, is a tall, conical volcano built up by many layers of hardened lava, tephra, pumice, and volcanic ash. Unlike shield volcanoes, stratovolcanoes are characterized by a steep profile and periodic, explosive eruptions...
, Pik Severgin -' onMouseout='HidePop("52388")' href="/topics/Japanese_language">Japanese
Japanese language
is a language spoken by over 130 million people in Japan and in Japanese emigrant communities. It is a member of the Japonic language family, which has a number of proposed relationships with other languages, none of which has gained wide acceptance among historical linguists .Japanese is an...
春牟古丹岳; Harikotan-dake), which rises to 1157 m (3,796 ft) above sea level. The peak is marked by two horseshoe
Horseshoe
A horseshoe, is a fabricated product, normally made of metal, although sometimes made partially or wholly of modern synthetic materials, designed to protect a horse's hoof from wear and tear. Shoes are attached on the palmar surface of the hooves, usually nailed through the insensitive hoof wall...
shaped volcanic crater
Volcanic crater
A volcanic crater is a circular depression in the ground caused by volcanic activity. It is typically a basin, circular in form within which occurs a vent from which magma erupts as gases, lava, and ejecta. A crater can be of large dimensions, and sometimes of great depth...
s created by the collapse of the volcanoes upper slopes. Other evidence of the collapse can be seen on the peninsulas to the east and northwest which were formed by the debris. The volcano has erupted occasionally from the 18th century onwards, with the last recorded eruption in 1933 sending volcanic ash as far away as Paramushir
Paramushir
Paramushir , is a volcanic island in the northern portion of Kuril Islands chain in the Sea of Okhotsk in the northwest Pacific Ocean. It is separated from Shumshu by the very narrow Second Kuril Strait in the northeast , from Antsiferov by the Luzhin Strait to the southwest, from Atlasov in the...
. The collapse of the cone resulted in a debris-avalanche
Avalanche
An avalanche is a sudden rapid flow of snow down a slope, occurring when either natural triggers or human activity causes a critical escalating transition from the slow equilibrium evolution of the snow pack. Typically occurring in mountainous terrain, an avalanche can mix air and water with the...
which subsequently caused a tsunami
Tsunami
A tsunami is a series of water waves caused by the displacement of a large volume of a body of water, typically an ocean or a large lake...
, which killed two people on Pamamushir. The path on which the debris took is visible on satellite
Satellite
In the context of spaceflight, a satellite is an object which has been placed into orbit by human endeavour. Such objects are sometimes called artificial satellites to distinguish them from natural satellites such as the Moon....
imagery.

Kharimkotan as inhabited by the Ainu
Ainu people
The , also called Aynu, Aino , and in historical texts Ezo , are indigenous people or groups in Japan and Russia. Historically they spoke the Ainu language and related varieties and lived in Hokkaidō, the Kuril Islands, and much of Sakhalin...
at the time of European contact. The remains of a village exist in the northeast of the island, and the inhabitants subsisted by growing the edible bulbs of the Cardiocrinum, as well as fishing and hunting. The island appears on an official map showing the territories of Matsumae Domain
Matsumae clan
The was a Japanese clan which was granted the area around Matsumae, Hokkaidō as a march fief in 1590 by Toyotomi Hideyoshi, and charged with defending it, and by extension all of Japan, from the Ainu 'barbarians' to the north. The clan was originally known as the Kakizaki clan who settled...
, a feudal domain of Edo period
Edo period
The , or , is a division of Japanese history which was ruled by the shoguns of the Tokugawa family, running from 1603 to 1868. The political entity of this period was the Tokugawa shogunate....
Japan
Japan
Japan is an island nation in East Asia. Located in the Pacific Ocean, it lies to the east of the Sea of Japan, China, North Korea, South Korea and Russia, stretching from the Sea of Okhotsk in the north to the East China Sea and Taiwan in the south...
dated 1644, and these holdings were officially confirmed by the Tokugawa shogunate
Tokugawa shogunate
The Tokugawa shogunate, also known as the and the , was a feudal regime of Japan established by Tokugawa Ieyasu and ruled by the shoguns of the Tokugawa family. This period is known as the Edo period and gets its name from the capital city, Edo, which is now called Tokyo, after the name was...
in 1715. Subsequently claimed by the Empire of Russia, sovereignty
Sovereignty
Sovereignty is the quality of having supreme, independent authority over a geographic area, such as a territory. It can be found in a power to rule and make law that rests on a political fact for which no purely legal explanation can be provided...
initially passed to Russia under the terms of the Treaty of Shimoda
Treaty of Shimoda
The Treaty of Shimoda of 1855, formally Treaty of Commerce and Navigation between Japan and Russia , was signed between the Russian Vice-Admiral Euphimy Vasil'evich Putiatin and Toshiakira Kawaji of Japan in the city of Shimoda, Izu Province, Japan, on February 7, 1855...
, but was returned to the Empire of Japan
Empire of Japan
The Empire of Japan is the name of the state of Japan that existed from the Meiji Restoration on 3 January 1868 to the enactment of the post-World War II Constitution of...
per the Treaty of Saint Petersburg (1875) along with the rest of the Kurile islands. The island was formerly administered as part of Shimushu District of Nemuro Subprefecture
Nemuro Subprefecture
is a subprefecture of Hokkaidō, Japan. The Japanese claim the disputed Southern Kurile Islands as part of this subprefecture....
of Hokkaidō
Hokkaido
, formerly known as Ezo, Yezo, Yeso, or Yesso, is Japan's second largest island; it is also the largest and northernmost of Japan's 47 prefectural-level subdivisions. The Tsugaru Strait separates Hokkaido from Honshu, although the two islands are connected by the underwater railway Seikan Tunnel...
. After World War II
World War II
World War II, or the Second World War , was a global conflict lasting from 1939 to 1945, involving most of the world's nations—including all of the great powers—eventually forming two opposing military alliances: the Allies and the Axis...
, the island came under the control of the Soviet Union
Soviet Union
The Soviet Union , officially the Union of Soviet Socialist Republics , was a constitutionally socialist state that existed in Eurasia between 1922 and 1991....
, and is now administered as part of the Sakhalin Oblast
Sakhalin Oblast
Sakhalin Oblast is a federal subject of Russia comprising the island of Sakhalin and the Kuril Islands.The oblast has an area of 87,100 km² and a population of 546,695...
of the Russian Federation.