Karl Valentin came from a reasonably well-off middle-class family; his father had a partnership in a furniture-transport business. Valentin first worked as a carpenter's apprentice, and this experience proved useful in the construction of his sets and props later in life. In 1902, he began his comic career, enrolling for three months at a variety school in Munich, under the guidance of Hermann Strebel. His first job as a performer was at the Zeughaus
Zeughaus
The Zeughaus of Berlin is the oldest structure on the Unter den Linden. It was built by the Brandenburg Elector Frederick III between 1695 and 1730 in the baroque style, to be used as an artillery arsenal...
in Nürnberg (Nuremberg)
Nuremberg
Nuremberg[p] is a city in the German state of Bavaria, in the administrative region of Middle Franconia. Situated on the Pegnitz river and the Rhine–Main–Danube Canal, it is located about north of Munich and is Franconia's largest city. The population is 505,664...
. In the wake of his father's death Valentin took three-year break from performing, during which he constructed his own twenty-piece one-man band
One-man band
A one-man band is a musician who plays a number of musical instruments simultaneously using their hands, feet, limbs, and various mechanical contraptions. The simplest type of "one-man band" — a singer accompanying themselves on acoustic guitar and harmonica mounted in a metal "harp rack" below the...
(with which he eventually toured in 1906).

Soon Valentin was performing regularly in the cabarets and beerhalls of München (Munich
Munich
Munich The city's motto is "" . Before 2006, it was "Weltstadt mit Herz" . Its native name, , is derived from the Old High German Munichen, meaning "by the monks' place". The city's name derives from the monks of the Benedictine order who founded the city; hence the monk depicted on the city's coat...
). He developed a reputation for writing and performing short comic routines, which he performed in a strong Bavarian dialect, usually with his female partner, Liesl Karlstadt. Valentin also made numerous films, both silent and with audio; but it was as a stage performer in cabarets that Valentin built a reputation as one of the leading comic performers in Germany during the Weimar Republic
Weimar Republic
The Weimar Republic is the name given by historians to the parliamentary republic established in 1919 in Germany to replace the imperial form of government...
.

The film script was written by Bertolt Brecht
Bertolt Brecht
Bertolt Brecht was a German poet, playwright, and theatre director.An influential theatre practitioner of the 20th century, Brecht made equally significant contributions to dramaturgy and theatrical production, the latter particularly through the seismic impact of the tours undertaken by the...
, directed by Erich Engel, and also featured Valentin's cabaret partner, Liesl Karlstadt, as well as an ensemble of stage, film, and cabaret performers, including Max Schreck
Max Schreck
Friedrich Gustav Max Schreck was a German actor. He is most often remembered today for his lead role in the film Nosferatu .-Early life:Max Schreck was born in Berlin-Friedenau, on 6 September 1879....
, Erwin Faber
Erwin Faber
Erwin Faber was a leading actor in Munich and later throughout Germany, beginning after World War I, and through the late-1970's, when he was still performing at the Residenz Theatre...
, Josef Eichheim, and Blandine Ebinger. Although the film was not immediately released after it was completed in February 1923, it has come to be recognized as one of the one hundred most important films in the history of German filmmaking.

The previous year, 1922, Bertolt Brecht
Bertolt Brecht
Bertolt Brecht was a German poet, playwright, and theatre director.An influential theatre practitioner of the 20th century, Brecht made equally significant contributions to dramaturgy and theatrical production, the latter particularly through the seismic impact of the tours undertaken by the...
, had appeared with Valentin and Karlstadt in a photo of Valentin's spoof of Munich's Octoberfest. Brecht regularly watched Valentin perform his cabaret routines in Munich's beerhalls, and compared him to Chaplin
Charlie Chaplin
Sir Charles Spencer "Charlie" Chaplin, KBE was an English comic actor, film director and composer best known for his work during the silent film era. He became the most famous film star in the world before the end of World War I...
, not least for his "virtually complete rejection of mimicry and cheap psychology." 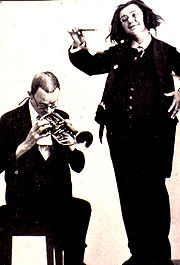 But the man he [Brecht writes of himself in the third person
Grammatical person
Grammatical person, in linguistics, is deictic reference to a participant in an event; such as the speaker, the addressee, or others. Grammatical person typically defines a language's set of personal pronouns...
] learnt most from was the clown Valentin, who performed in a beer-hall. He did short sketches in which he played refractory employees, orchestral musicians or photographers, who hated their employer and made him look ridiculous. The employer was played by his partner, a popular woman comedian who used to pad herself out and speak in a deep bass voice. When the Augsburg
Augsburg
Augsburg is a city in the south-west of Bavaria, Germany. It is a university town and home of the Regierungsbezirk Schwaben and the Bezirk Schwaben. Augsburg is an urban district and home to the institutions of the Landkreis Augsburg. It is, as of 2008, the third-largest city in Bavaria with a...
er [Brecht] was producing his first play, which included a thirty minutes' battle, he asked Valentin what he ought to do with the soldiers. 'What are the soldiers like in battle?' Valentin promptly answered: 'They're pale. Scared shitless.'

This anecdote has become significant in the history of German theatre, since it was Valentin's idea of applying chalk to the faces of Brecht's actors in his production of Edward II that Brecht located the germ of his conception of 'epic theatre
Epic theater
Epic theatre was a theatrical movement arising in the early to mid-20th century from the theories and practice of a number of theatre practitioners, including Erwin Piscator, Vladimir Mayakovsky, Vsevolod Meyerhold and, most famously, Bertolt Brecht...
'.

Valentin's naïve sense of humour produced sketches that in spirit were loosely connected to dadaism, social expressionism
Expressionism
Expressionism was a modernist movement, initially in poetry and painting, originating in Germany at the beginning of the 20th century. Its typical trait is to present the world solely from a subjective perspective, distorting it radically for emotional effect in order to evoke moods or ideas...
and the Neue Sachlichkeit. Along with Karl Kraus
Karl Kraus
Karl Kraus was an Austrian writer and journalist, known as a satirist, essayist, aphorist, playwright and poet. He is regarded as one of the foremost German-language satirists of the 20th century, especially for his witty criticism of the press, German culture, and German and Austrian...
, he is considered a master of gallows humor
Gallows humor
Gallows humor , derives from gallows which is a platform with a noose used to execute people by hanging. Gallows humor is the type of humor that still manages to be funny in the face of, and in response to, a perfectly hopeless situation...
. His art centered mostly around linguistic dexterity and wordplay—Valentin was a linguistic anarchist. His comedy would often begin with a simple misunderstanding, on which he would insist as the sketch progressed. The notable critic
Critic
A critic is anyone who expresses a value judgement. Informally, criticism is a common aspect of all human expression and need not necessarily imply skilled or accurate expressions of judgement. Critical judgements, good or bad, may be positive , negative , or balanced...
Alfred Kerr
Alfred Kerr
Alfred Kerr , born Alfred Kempner, was an influential German-Jewish theatre critic and essayist, nicknamed the Kulturpapst ....
praised him as a Wortzerklauberer, or someone who tears apart words and language to forcefully extract and dissect its inherent meaning. His sketches often parodied and derided "shopkeepers, firemen, military band players, professionals with small roles in the economy and the defence of society".

In 1959 based on private initiative the Valentin-Musäum was established in the Isartor
Isartor
The Isartor at the Isartorplatz in Munich is one of four main gates of the medieval city wall. It served as a fortification for the defence and is the most easterly of Munich's three remaining gothic town gates...
in Munich. This museum shows absurdities from parts of his inheritance.