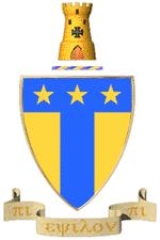 Encyclopedia
Alpha Tau Omega is a secret American leadership and social fraternity
Fraternities and sororities
Fraternities and sororities are fraternal social organizations for undergraduate students. In Latin, the term refers mainly to such organizations at colleges and universities in the United States, although it is also applied to analogous European groups also known as corporations...
.

The Fraternity has more than 250 active and inactive chapters, more than 200,000 initiates, and over 7,000 active undergraduate members. The 200,000th member was initiated in early 2009. While the oldest active chapter is the Delta Chapter located at the University of Virginia
University of Virginia
The University of Virginia is a public research university located in Charlottesville, Virginia, United States, founded by Thomas Jefferson...
, they temporarily lost their charter in 1984, making the Beta Beta chapter at Birmingham-Southern College
Birmingham-Southern College
Birmingham–Southern College is a 4-year, private liberal arts college located three miles northwest of downtown Birmingham. Founded in 1856, it is affiliated with the United Methodist Church. Approximately 1400 students from 30 states and 23 foreign countries attend the college...
the oldest continuously operating chapter. Alpha Tau Omega is also one-third of the Lexington Triad, along with Kappa Alpha Order
Kappa Alpha Order
Kappa Alpha Order is a social fraternity and fraternal order. Kappa Alpha Order has 124 active chapters, 3 provisional chapters, and 2 commissions...
and Sigma Nu
Sigma Nu
Sigma Nu is an undergraduate, college fraternity with chapters in the United States, Canada and the United Kingdom. Sigma Nu was founded in 1869 by three cadets at the Virginia Military Institute in Lexington, Virginia...
. The Fraternity does not have chapters or affiliated organizations in any other location outside of the United States.

During and after the Civil War, families were torn apart, due to brothers fighting on opposite sides. A Virginia Military Institute
Virginia Military Institute
The Virginia Military Institute , located in Lexington, Virginia, is the oldest state-supported military college and one of six senior military colleges in the United States. Unlike any other military college in the United States—and in keeping with its founding principles—all VMI students are...
student, Otis Allan Glazebrook, had a vision to reunite the North and the South in brotherhood. His ideals started Alpha Tau Omega as the first fraternity that would be considered a national fraternity, and it was with Erskine Mayo Ross and Alfred Marshall that he sought to bring together the two factions that had been torn apart.

The LeaderShape Institute, Inc. was created in 1986 by Alpha Tau Omega, and today is considered one of the nation's finest leadership skills training programs in the USA. ATO was honored by the Smithsonian Institution
Smithsonian Institution
The Smithsonian Institution is an educational and research institute and associated museum complex, administered and funded by the government of the United States and by funds from its endowment, contributions, and profits from its retail operations, concessions, licensing activities, and magazines...
for innovative use of technology with an award for Information Technology in the field of Government and Non-Profit Organizations in June 1995. The award was given for ATO's innovative use of CompuServe as a communications tool.

Otis Allan Glazebrook, Alfred Marshall, and Erskine Mayo Ross are recognized as the three founders of ATO. Following these, the next leader of ATO was Thomas Arkle Clark; Clark was the first Dean
Dean (education)
In academic administration, a dean is a person with significant authority over a specific academic unit, or over a specific area of concern, or both...
of education at the University of Illinois and the President of the Gamma Zeta chapter at the University. Thomas A. Clark served the national fraternity as "Worthy Grand Chief" for several terms. To this day, the highest honor a graduating senior can achieve is the Thomas Arkle Clark Award.

Another man, Joseph R. Anderson, is known as the second founder of ATO. Because of a lack of organization and many chapters ignoring their responsibilities to the national fraternity—including financial ones, ATO was on a devastating decline. In 1876, of the 22 chapters in existence at the time, only 2 attended the annual Congress. Joseph R. Anderson was appointed and accepted the position of Senior Grand Chief, or the National President, in 1870. Under Anderson, ATO was able to get back on track and become the well established fraternity it is today.